Patience is a virtue that the Philadelphia Union can't afford 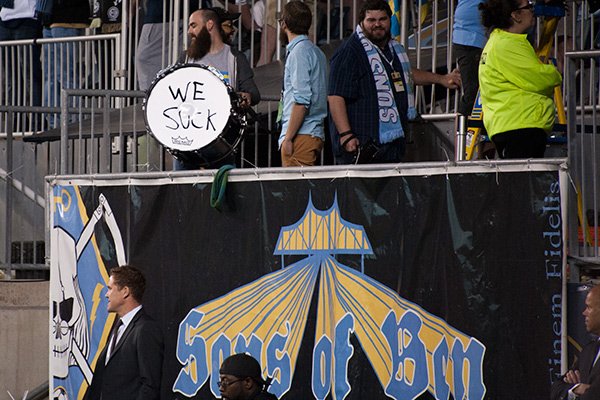 Fans in the River End share their feelings about the 2017 Philadelphia Union.

It wasn't long ago that fans marched a coffin into Talen Energy Stadium in a protest that rattled front office nerves and drew national attention.

The Philadelphia Union were on a four-game losing streak and goalkeeper Rais Mbolhi had been sent home to France after five poor outings that were, admittedly, not entirely his fault. The defense was porous and the offense stagnant, with fans turning on then-CEO and Operating Partner Nick Sakiewicz.

He was ousted at the end of the season and Earnie Stewart was brought in to become the Union's very first Sporting Director.

Heading into 2016, the team now had a legitimate player-personnel executive, practice fields, and a professional training facility.

Stewart's first year saw the team rise to the top of the Eastern Conference, then backslide into the playoffs on a seven-game winless streak. The franchise took significant steps forward but the postseason appearance was an easy way to spackle over the fact that the club had finished in the bottom half of the conference and 13th out of 20 teams overall.

It's now been 23 months since the casket demonstration and we're back to a situation that isn't much different.

The Union are winless in six to start the new campaign and haven't won since August of last year. There is no game-changer or creative attacker on the roster. The defense is a work in progress and a number of Stewart's signings have so far underwhelmed. Ownership still isn't spending enough money relative to its peers, despite making significant investments in the youth academy and one-time infrastructure projects.

Head coach Jim Curtin, now in his third full season, remains committed to one set of tactics and a formation that he says the club recruited players to fit. Yet nowhere on the roster do I see a legitimate number ten, and the fourth-division English attacker who was signed in the winter is not a center forward built for a one-striker system.

At this point, I think we can all admit that Curtin doesn't have much to work with, but he's not as faultless as some in the media would have you think.

The Union's messaging is that everything seems to be a-okay down in Chester. Internally, there's "no pressure" on Curtin, with Stewart backing him publicly. Majority owner Jay Sugarman, predictably, has yet to comment.

That's a message that doesn't resonate with fans who have watched six years of losing soccer before Stewart's arrival.

I understand that Earnie can't dwell on the past. He wasn't here during the years of Lio Pajoy, Carlos Valdes, and Freddy Adu. He was brought here to install a long-term plan to move the franchise forward. Stewart, Curtin, Sugarman, and part-owner Richie Graham are committed to a Moneyball approach that focuses on youth and replaces cash-throwing with smart and shrewd investments.

They are all on the same page, which is a far cry from the years of front office executives trying to be scouts and agents.

Union fans get that.

I think they accept the fact that the team is not going to spend a ton of money. They know that this is a process, not of the Sam Hinkie variety, but one with small margins for error. They know that the academy is still in nascent stages of first team production.

But even then, the fear of the long view is that this team still won't be good enough.

If the Union put eleven of Derrick Jones on the field, does that win you the league? If the hit-or-miss rate on Moneyball signings is 50 percent, does that get you into the playoffs? If Toronto and Atlanta and even Chicago continue to shell out money for marquee foreign signings, can the Union keep up?

There's nothing to guarantee that doing things "the right way" will ever make you competitive in the East. The model must be FC Dallas if the Philadelphia Union are committed to youth production and mining for foreign diamonds.

Right now, none of that is working. There is a regression from the Union's core of 2016 standouts and the overseas signings aren't panning out. Some can't even get into the 18, like former Bundesliga player Fafa Picault and Giliano Wijnaldum, who was good enough to play 90 minutes in the 2013 KNVB Cup final but now slogs through USL games. Josh Yaro is hurt again and Maurice Edu hasn't been on the field in two years.

More than anything, it feels like the Union are entering dangerous waters with a portion of the fan base. Anger and disappointment is one thing, but I sense apathy from certain groups that were reinvigorated by the departure of Sakiewicz and arrival of Stewart.

Again, 23 months later, they are saying the same things we heard around the time of casket protest.

"We deserve better" was the theme of that demonstration.

They do deserve better. They're the ones paying for season tickets and parking and gas and whatever else is needed to get you to Chester on Saturday night, when you can go to the shore, the Poconos, the Joe Conklin gig, or whatever else is going on in our region.