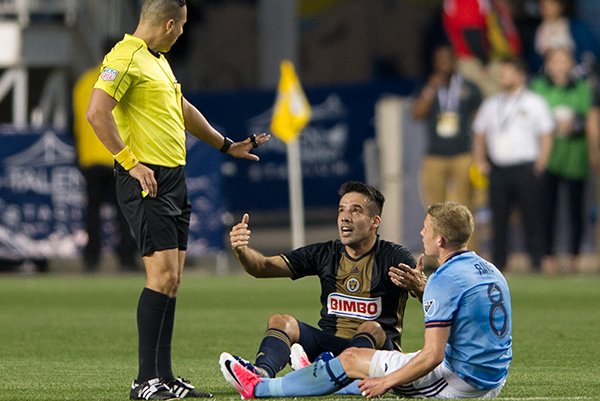 Are we seeing a shakeup in the Union starting lineup?

Or was this just an experiment?

Keegan Rosenberry played with the second team Wednesday morning as the Philadelphia Union did full-field exercises at Talen Energy Stadium.

The Union's second-year right back has started 41 straight games but is struggling in 2017.

His backup, Ray Gaddis, practiced alongside Jack Elliott on the right side of the first-team defense

"We were experimenting with a couple of different things, with (Ignacio) Piatti obviously and (Dominic) Oduro (playing for Montreal this weekend)," said head coach Jim Curtin. "We also took a look at Chris Pontius out wide on the right with Ilsinho on the left. We experimented with a bunch of different things today. We tried Fafa Picault at a different spot and Marcus Epps at a different spot, just to take a look at different things as you have a long week of training, a five-day week as opposed to a four-day week. We had some extra time and wanted to have a bit of an intra-squad (scrimmage) and mix up the teams a little bit. We got some good answers to some questions."

Josh Yaro did not participate in training but worked independently at the Power Training Complex fields.

Speaking of Alberg, I broke down his performance against New York on Tuesday.

The Dutch forward had some good moments in his first start of the season, which Curtin agreed with.

"I thought he worked hard," Curtin said. "He's worked hard to get his fitness up. He did a good job of making Andrea Pirlo uncomfortable. I thought he was part of the reason why we were able to dispossess them in their part of the field, just because he was always in and around Pirlo. That hasn't been the case when you watch the tape of when New York has success. He's the guy that starts the attack and is spraying balls. So, on the defensive side, Roland did a good job."

Alberg had two shots in a 71-minute shift.

"A lot of his possession was maybe a little deeper than we wanted it to be," Curtin continued. "I had a good talk with him today. He connected a lot of his passes percentage-wise, but we want them to have a little more risk and be a little more forward those final balls. He had a good game. It's never a great game for anybody when we don't win, but I thought he showed some good sign. There are moments when he can be a bit sharper, but overall a good performance from Roland."

This clip is worth sharing again:

The quote of the day came from Haris Medunjanin, who gave this evaluation of the team's form:

"I came here to win games. It's a good league, and anybody can beat anybody while also losing to anybody. That's where we are now. We're losing some stupid games, but that's football. We need to fight in every game and hopefully turn it around."

The Bosnian midfielder explained why the Union aren't winning games.

"Sometimes in the first half we're playing well but we didn't score," Medunjanin said. "Then, in the second half, we start bad, they score, and we fall apart. I think we need to be mentally more prepared for that because the game is 93 or 94 minutes. We need to be focused for the entirety of the game. I think we've been creating a lot of chances but the ball isn't going in."

"I think the game opens up a bit in the second half," he said. "I think it just depends mentality-wise, but really it's just on us to put in 90 minutes of supreme focus and fight throughout the whole game."

Curtin: "Guys start to press, confidence is down, and you start to see guys to do too much to be the guy who makes the big play"

"I take it personally"

Marquez explained that the mood has been good around training and inside the locker room.

It's not easy to keep the defensive confidence high when the offense isn't scoring, but the Union's fourth-year CB isn't shifting the blame.

"I take it personally," Marquez said. "I see how many goals we've conceded and I don't think I've been doing the best job. I'm pretty critical of myself."

He's okay with the boos coming from the stands.