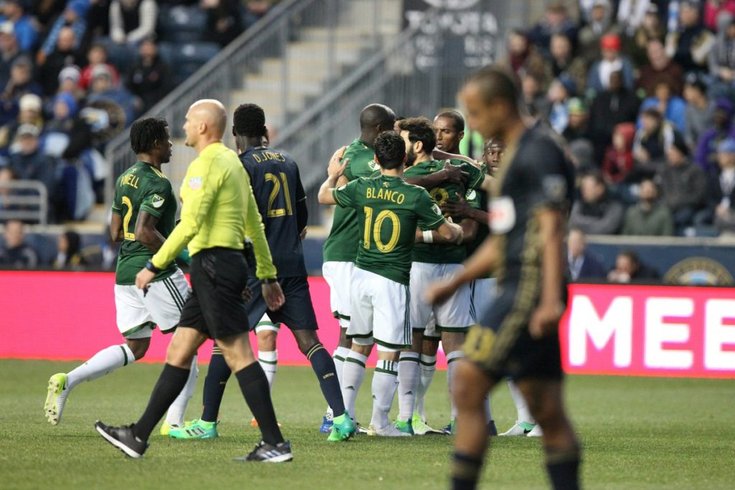 It began with a question about starting two strikers.

Union manager Jim Curtin was asked at his midweek press conference whether he might try playing C.J. Sapong next to Jay Simpson on Friday night as a way to boost the attacking game and snap a three-game losing skid.

"There's always consideration for everything," Curtin said on Wednesday. "Everything is open and we'll think and discuss things through. At the same time, we believe in the group. We believe in the formation that we play. We believe in the 4-2-3-1. It just takes executing and the guys, making their roles as clear as possible. This week, that's something we've stressed, which is getting back to those basics. Yea, there's going to be technical mistakes on the field. We can live with those. It's just a matter of being brave, everybody executing their role, and things will start to turn our way and we can get three points."

The Union have been trying to get "back to basics" since the fall when the team was in the middle of a winless streak that began on September 3rd with a 3-0 loss in Chicago.

Throughout the stretch, Curtin doubled-down on his shape and system, committing to the 4-2-3-1 and choosing to fight through the slump by reemphasizing the points that put Philadelphia on top of the Eastern Conference at the Copa America break.

Those points, which included smothering team defense, high pressing, and a workmanlike, mind-over-matter approach, were never rediscovered. The Union finished the season with two draws, five losses, and a first-round playoff exit.

The winless ways continue in 2017, even with a winter to bring in new players and hit the reset button after a grueling, eight-month season. But the issues are the same, with little creativity going forward, strikers stuck on an island, and a lack of on-field identity.

Again, instead of changing the philosophy, Curtin is sticking to his guns.

"If you totally scrap it now, all of a sudden there's confusion," Curtin said of a tactical change. "We still believe in what we're doing. We don't want to make it more complicated for the players. We want to have their roles be clear and identified. We recruited players and brought players in based on that system. They’re here now because they fit all the traits we see in a Philadelphia Union player in each role. We know we haven’t performed exactly how we want to on the field, but we know that if we continue to believe in the system we have, we will get the results that sometimes we deserve.

"It's early on right now. We've lost three games. We've been beaten three times in a 34 game season. Do we sense urgency? Absolutely. We have to fight our way out and it will be in the system we’ve chosen to play.”

Do you commend Curtin for staying the course? Or is it time for a change?

The concerning thing about the above quote is the suggestion that changing tactics or shape results in "confusion" or complication. We're talking about professional athletes here, some with World Cup and international experience. If they can play a 4-2-3-1, then certainly they can handle an in-game switch to something else. This isn't like learning the Eagles' playbook or a triangle offense. These are the highest level soccer players in the United States.

It's further bothersome when you look around the league and see what other teams are doing.

Toronto FC went to MLS Cup playing a 3-5-2 that was installed halfway through the season. If Eriq Zavaleta and Nick Hagglund are good enough to start on a three-man backline, then don't you dare tell me that the Union don't have the personnel to play the shape.

Even earlier in the year, Toronto played a flat 4-4-2 and a diamond, with players shifting roles multiple times throughout the season.

Last week, Atlanta came out of their shape in a 2-2 road draw. Orlando, who started the season in an empty bucket, played a diamond in a 1-0 win against New York. D.C. United is basically starting with an inverted triangle in a 4-1-4-1, which we've seen Curtin do in later game situations.

There's just been little flex from the Union manager since he took over.

The last time the Union started with two strikers on the field was the 2015 season opener, when Sapong and Fernando Aristeguieta were deployed against Colorado's towering center backs, Bobby Boswell and Axel Sjoberg.

That was two years ago.

Sure, Curtin could be throwing shade at Earnie Stewart or even his players and suggesting that he doesn't have the tools to play something different. Admittedly, the main reason they play 4-2-3-1 is because they probably don't have two strikers that are worthy of putting on the field. Curtin had Sapong and nothing else in the forward department last year. He lost Vince Nogueira midway through the season. Maurice Edu and Josh Yaro were plagued by injury and Tranquillo Barnetta turned out to be a bigger loss than most of us had thought.

This team doesn't have Michael Bradley, Miguel Almiron, or even Lucho Acosta.

But it does have enough players who are smart enough to figure out a new system and at least try to play it. If they're not good enough, then Curtin can be absolved of responsibility after we witness the on-field results.

Stewart would then take the blame. And Jay Sugarman, as well.

The ultimate shame – and primary source of fan frustration – is that it looks as if Curtin is ready to go down in flames without giving something else a shot.

Last year, at the season-ending press conference, we asked Stewart about the commitment to the 4-2-3-1, and he echoed what Curtin had said throughout the year:

"No, I don’t believe in (changing things) and, like I said, there are certain moments in a season where things don’t go your way and you need to fall back on something," Stewart said in October. "And the more you change, and the more you make it difficult, especially for young players in different formations or different tactical ways of setting up, it’s going to hurt you. And what we tried to concentrate on towards the end of the season was actually trying to take stress away and go back to those roles and responsibilities and do your job.

"It’s easier said than done because when you’re out there on the field and there’s 18,000 people looking at you and we’re expecting the same thing and the first pass hasn’t gone right, or we lost the last game, it becomes cloudy, and we have to make it clearer. Do I believe that with some teams, the Chelseas of this world and the Manchester Uniteds, that you can just change it up? Yes, because they’re all seasoned veterans, they’re all seasoned pros, and it’s easy. We made this choice in the beginning of the season to do it this way.

"It's not saying that, in the last ten minutes – and Jim has done this during the season – that you can't throw an extra center forward up, I mean, that’s (obvious). But you go back to your basics, and back to the normal part, because that’s what everybody gets their confidence from. And once you let it go and you change a lot, people don’t know what to expect anymore and what their task is. And obviously, the more that players get seasoned, get experience, you can do a little bit more of that."

At some point, the training wheels have to come off.

I can understand the rookies or homegrown players needing stability and time with a new system. But Chris Pontius, Haris Medunjanin, Alejandro Bedoya, and Ilsinho, just to name a few Union starters, are perfectly capable of playing something different. Keegan Rosenberry and Fabian Herbers are young, but they're not stupid.

Yeah, Chelsea is filled with world class players, but you don't have to be Eden Hazard to figure out a 4-4-2.

Plus, if the players aren't good enough, then why are they here?

It just doesn't add up.

@Kevin_Kinkead Curtin is not going to change formation with his job on line. He's going to ride his guys in his formation to the end of the string.