Union Notes: A Lack of execution, fullback depth charts, and no chance for a 4-4-2 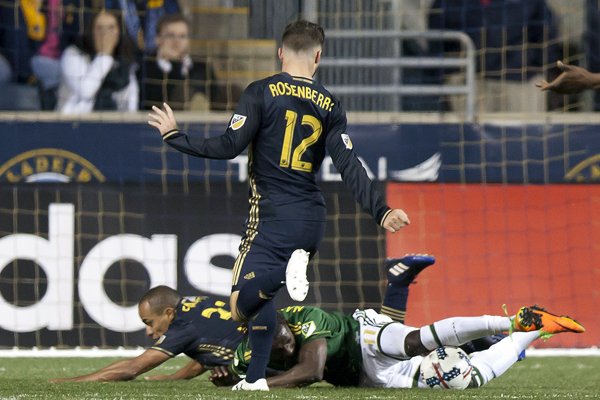 A failed clearance lead to the third goal in the Union's 3-1 loss to Portland.

A short week for the Union means little news from Chester.

When asked if there was an update on injured captain Maurice Edu, head coach Jim Curtin gave a one-word answer.

He did say that Josh Yaro is getting closer to a return – the second-year center back is now able to run, sprint, and change direction on the training field. He's been out since preseason after undergoing shoulder surgery.

Backup goalkeeper John McCarthy is still out due to concussion symptoms.

Curtin also confirmed a report linking goalkeeper Benjamin Bellot to the Union. The 26-year-old German will be here to train as a guest Oka Nikolov next week but he is not being considered a trialist.

The Union are looking for their first win of the season in a nationally televised Friday night game against New York City FC. It's the second game of a three-match homestand that began with a 3 to 1 loss last Saturday.

At his midweek press conference, the most interesting quotes probably revolved around the fullback situation and the mistake Fabinho made leading to the Timbers third goal.

"Fabinho, in this last Portland game, actually had a really good game I thought, up until the play at the end, where Keegan has a chance to clear it and Fabi makes a risky play," Curtin said. "In those situations, we talked to him about being a little more decisive and ending the play, so to speak, whether it's kicking the ball out of bounds or committing a foul. He recognizes mistakes. He's the first one to put his hand up and apologize and say that he made a mistake. But, at the same time, I won't let one play in that game say that he had a bad performance.

"Overall, when you watch the tape back, he had a decent day. The natural thing is to eliminate those key errors. We've given up three penalty kicks. We've given up some goals that are individual mistakes that we can fix and we have to do it together as a team now. Giliano [Wijnaldum] is in the discussion, as are all of our players, the reserves that are pushing for minutes. He's been improving each and every day in practice and had a good performance with Bethlehem. We'll make a decision to put the best group out there to get a result against New York City."

Curtin was asked if Wijnaldum, a winter arrival, is behind schedule.

"Not at all," he said. "What it is, is that when you pick an eighteen now, first of all, you're only going to take one outside back [for the bench]. It's very rare that a team would take two outside backs. At this moment, Ray Gaddis is a guy who is ahead of Giliano and Fabinho remains ahead of Giliano as well. Is that getting closer? Of course, yea. That's natural on a pro team, that there would be pressure to perform since the guy behind you is pushing. That's normal.

"Right now, as it stands, Fabinho is still in his position and it's unfortunate that Giliano hasn't been in the eighteen, because he's a very good player that can help. But Ray is a guy that has more experience in our league and is in decent form. I have no problem going to him off the bench."

For me, the ultimate irony is that Gaddis is ahead of Wijnaldum because he was played out of position by the prior two regimes. Gaddis learned how to play on the left and became a backup option at both fullback spots, providing some utility despite not developing in the most positive way.

Utimately, that incorrect usage of a right-footed player now means that a natural right back is currently topping your brand new left back signing on the depth chart.

On whether or not Chris Pontius is getting enough touches in the final third:

"I think, listen, Chris is a guy who is very good in the box finishing off play," Curtin said. "Again, [it's] for a variety of different reasons. Part of it is service, part of it is us getting him more advanced, us being a little better in possession, and part of it maybe him just getting a break here or there. If we continue to do a lot of the same things – we are creating chances – we're not giving up a lot of chances. We're second in the league in [fewest] shots conceded, which is good. Over the course of averages and data and statistics that you have, if you continue to work hard and do a lot of the similar things, eventually he'll get on the end of a cross and the flood gates will open. We're confident in that. Again, I don't worry about Chris at all. He's a guy that I have total confidence in. It's just about getting that first break to go his way."

Is there consideration of starting C.J. Sapong and Jay Simpson together?

"There's always consideration for everything. Everything is open and we'll think and discuss things through. At the same time, we believe in the group. We believe in the formation that we play. We believe in the 4-2-3-1. It just takes executing and the guys, making their roles as clear as possible. This week, that's something we've stressed, which is getting back to those basics. Yea, there's going to be technical mistakes on the field. We can live with those. It's just a matter of being brave, everybody executing their role, and things we'll start to turn our way and we can get three points."