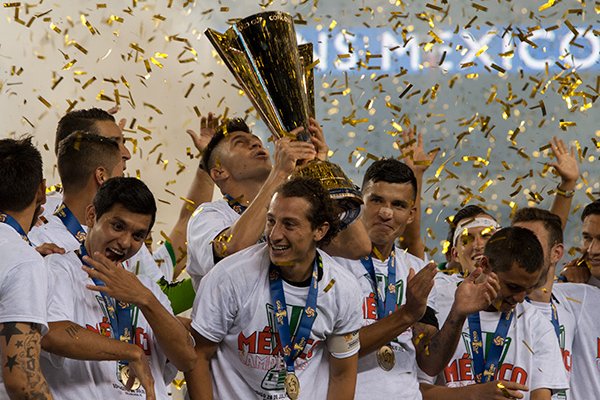 A joint World Cup bid between the United States, Canada, and Mexico is pretty much perfect except for one thing.

The involvement of each country is completely unbalanced.

The bid, which was made official on Monday afternoon, would see 60 games played in the United States, 10 in Canada, and 10 in Mexico. The last three rounds of the tournament would take place exclusively in the U.S.

That's great if you're an American, and Canadian fans seem pleased just to be involved at all, but Mexicans should be irate.

Here's a country with great soccer tradition, the best domestic league on the continent and a national team that is probably more popular in the United States than our own squad.

It's a raw deal. It really is, and people are looking down various avenues to justify why Mexico should only host 12.5 percent of the tournament while we get 75 percent.

They start with stadium size.

Sure, we've got the best infrastructure and dozens of venues that hold more than 60,000 people.

But if we're talking about an expanded, 48-team World Cup, we don't need every game to be played in an NFL stadium. Tigres' 41,000 capacity Estadio Universitario is perfectly capable of hosting a group stage game between South Korea and Cameroon. Montreal's Stade Saputo, capacity 20,000, is fine for Northern Ireland vs. Honduras.

A larger pool of teams means a watered down tournament, which makes for some less-than-interesting matchups that can justifiably be held in smaller venues.

Are we really going to risk profits by playing in smaller venues?

This tournament is going to annihilate revenue records no matter where the games are played. The 60 games in the United States will easily set new marks. If 52 games at the 1994 World Cup generated $100 million in FIFA profits, then 60 games in 2017 will go well beyond that and probably also crest the $300 million that was made in the four-year cycle ending with the 2014 World Cup in Brazil.

You could do the split in a variety of ways that are more inclusive to Mexican fans and still generate incredible profit. It could be 50/20/10 for the U.S., Mexico, and Canada. You could probably even go 40/25/15 and still make a ton of money while also putting fans in stadiums that hold more than 40,000 people.

This from ESPN Mexico's @LeonLec: For dignity, Mexico should retract its candidacy for 2026 before presenting it ... 10 games = ridiculous https://t.co/f942zt0sNd

And let's not politicize this World Cup bid. A lot of left-leaning soccer writers, which is most of the community, couldn't wait to talk about Donald Trump's travel ban and whether or not that hurts our hosting chances.

First of all, Trump won't even be in office by 2026 and might be a lame duck, one-term president when the FIFA vote takes place in 2020. The addition of Canada and Mexico to the bid also dampens any concerns that might be brought up regarding American foreign policy.

Some people say the inclusion of Mexico and Canada, versus going it alone, was necessary to circumvent the American political issue. I don't know if that's true, but it probably makes the optics look better.

Second, we're having the 2018 World Cup in Russia and 2022 World Cup in Qatar, two countries which aren't exactly known for their human rights records. The latter tournament is being built by slave labor anyway, so are we really going to split hairs over a Trump policy that has twice been struck down by the courts?

This is the post-Sepp Blatter era, so it's understandable that FIFA will hopefully take ethics a little more seriously going forward. I just don't think that any current American policy will seriously affect a bid for a World Cup slated for nine years from now.

Ronald Reagan was still in office when the United States won the bid for the 1994 World Cup. By the time it finally started, Bill Clinton was halfway through his first term.

Also, any worries about a border wall between the U.S. and Mexico are pointless because, let's be honest, that thing is never going to be built anyway.

Speaking of construction, let's also not forget that Qatar is building most of its arenas from the ground up. That's a much bigger infrastructure concern than, say, worrying about whether Vancouver will be able to figure out a grass pitch. Most of Canada's biggest stadiums have turf fields, but the investment in playing surfaces will easily be covered by profits. Mexico has natural grass in most of their stadiums, so there's really no issue there. The U.S. and Canada are going to have to figure that one out, the same way we figured it out in 94' when we put grass inside the Pontiac Silverdome.

Funny seeing the different reactions to the joint World Cup bid. Folks in 🇨🇦 are all 😁, while folks in 🇲🇽 are all 😡. Americans are all 🤷🏻‍♂️

This World Cup is going to have 16 groups of three teams with two advancing from each. If the joint bid is successful, all matches beyond the round of 16 will take place in the United States, which I mentioned earlier.

I don't think it's necessary at all.

I'd love to see a semifinal at the Estadio Azteca and a quarterfinal at Monterrey's 52,000 capacity BBVA Bancomer Stadium.

Let's throw out that agreement and do something like this:

* hopefully, the roof hasn't caved in by then.

That's four games for Canada, four games for Mexico, and seven for the United States. The semifinals are played in Vancouver and Mexico City while The Big House hosts the final.

I know BC Place doesn't hold a ton of people but it's only fair to split the semifinals between the other two host countries.

I didn't put a ton of NFL stadiums on that list, but there are going to be a ton of games that need hosting, so I wouldn't worry about that. I'd rather see the group stages at Lincoln Financial Field and Arrowhead, then we can play the knockout rounds at our glorious college football stadiums. I'd rather see the final in College Station than Los Angeles, honestly.

Of course, we have to actually win the bid before any of this becomes relevant.