If Alejandro Bedoya is not a number ten, then why is he playing there? 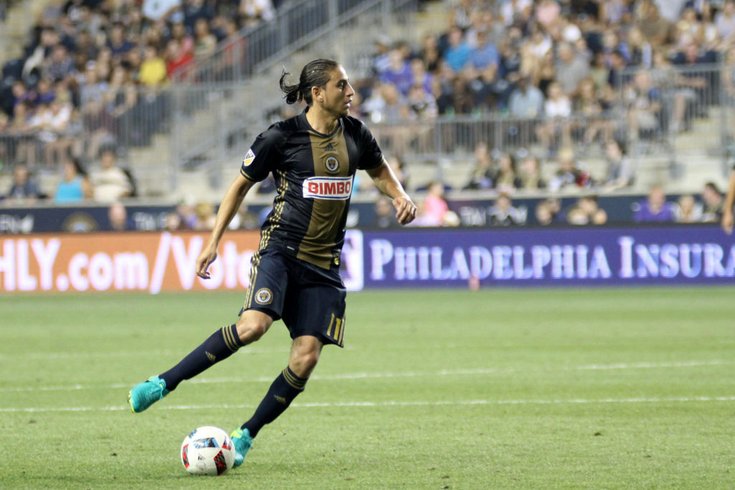 Union captain Alejandro Bedoya, the team's highest-paid player, admits that the number ten spot is not his favorite.

Alejandro Bedoya, the Union's record signing, is navigating a non-preferred position. He's spoken about it in the past, but Curtin is now addressing the topic.

“He and I are in agreement that (the number ten) isn’t his favorite spot," Curtin said at his midweek press conference. "It's not where he wants to be, with his back to the goal. Can he do it very well? Yes, he could, and if the penalty goes in and he scores that, and a couple of the good passes he's played and assists come up, then it's a non-discussion what position is best for him. He’s a guy who we’ve asked to do a ton. He does a ton of dirty work running defensively for us, is capable of playing in the eight spot, and is capable of playing wide like he does for the national team. He's just overall a really good soccer player who I believe is having a good year right now and a guy that we need to continue to put on the ball in dangerous parts of the field more than we have. Sometimes he might have to drop a little deeper to get on the ball and start our attack. We've talked a little bit about that this week."

We've established then that the coach understands that the club's record signing is not playing in his favorite position.

Bedoya told us as much, explaining back on February 28th:

"That's the one-million dollar question (laughs). I really don't (have a positional preference). I think I feel more comfortable being a number eight, where my engine allows me to go back and forth, find space, and kind of roam. But I'll do whatever it takes to try to do my best for the team and help the team out the best that I can. Right now, I still don't know what position I'm going to play in the opener. I'm sure we'll work on some more things in training, but we'll see how I start the season."

He followed that February quote with a specific description of why he's better in a deeper role:

"For me, playing as an eight or a six, I'm always going to get the ball facing forward, more often than not. At the number ten, a lot of (the time) you have to check to the ball with a defender up your butt. You don't have as much time as you do (as a 6 or 8). That's obviously the biggest difference for me. But they're both key roles. For me, as a number eight, I feel like I'll have more of an important role on the team because I'll have the ball probably a lot more and maybe be able to dictate the tempo of the game. As a number ten, sometimes you can drift in and out of the game and maybe not touch the ball for awhile."

That's basically what's happening through four games to start the season. Bedoya is putting in good shifts and pressing forward in the attacking third but he isn't seeing enough of the ball. He isn't creating enough goal scoring opportunities.

I want to share this tweet again because I think it's the best way to sum up the issue:

This says a lot about the Union's problems going forward. By my count, Alejandro Bedoya completed six passes in final third on Saturday. pic.twitter.com/ujq32jD4Ow

For context, it's important to note that he does have a pair of key contributions that don't show up on the stat sheet.

C.J. Sapong scored two goals from Bedoya efforts, one on a challenged cross in the Orlando game that a defender failed to clear while under pressure from the Union captain. In the D.C. game, it was Bedoya's shot that forced a Bill Hamid save, resulting in a juicy rebound for Sapong to tap-in.

This week, Bedoya further addressed the positional question when he spoke to Matt DeGeorge of the Delco Times:

“Right now I’m playing in a different position because of different circumstances and for various reasons and I’m trying my best to help the team out," Bedoya told DeGeorge. "But you’re not going to turn me into somebody that I’m not, or what you want me to do as a number ten playmaker guy. I’ve never really been that type of guy in my career.”

So we've established that Bedoya does not prefer to play as a ten, while the coach also admits that it isn't his favorite position.

If we're all in agreement that Bedoya isn't playing in the ideal spot, then...

What are the "different circumstances" and "various reason" that are forcing him into this role?

This is the scenario that makes the most sense and it probably explains what's going on.

Alberg has never been the guy to run hard, press defenders, and turn the ball over. He's not a two-way, blue collar grinder who will hustle back on defense. He's a natural goal scorer with a hell of a shot and inherent attacking quality.

People behind the scenes have suggested that Alberg is not in shape and that he showed up overweight in January. He's never the sharpest player in training and the body language looks lax at times if you put any stock into those kinds of things.

Curtin has been evasive when taking those questions but has alluded to the fitness issue.

The question is whether any of that really matters. Cristian Maidana had 26 assists in two seasons while playing zero defense in the same position.

The Union traded him.

Tranquillo Barnetta was a prototypical hard-working number ten who finished with five goals and four assists last year. For all of the good things he did, his numbers were incongruent with other number tens in MLS. He instead did a lot of things that didn't show up on the score sheet.

It really depends on how you look at the position. Can you forfeit defensive effort and hustle if a player is scoring goals and bagging assists? What kind of two-way responsibility does Mauro Diaz have? What about Giovani Dos Santos or Joao Plata?

I don't necessarily subscribe to the fact that Curtin is "playing favorites" with his selections. He's been extremely high on Fabian Herbers but dropped Herbers to the bench for Ilsinho when the Brazilian was healthy enough to start. He was also high on Ken Tribbett, who is now playing for Bethlehem Steel while fourth-round draft pick Jack Elliott occupies the first-team backup role.

I don't think Alberg is sitting on the bench because he was an Earnie Stewart signing, and therefore is "not one of Curtin's guys."

For what it's worth, I'm not down on Alberg at all. I've written plenty about his lack of playing time and praised his quality going forward. Any criticism of Alberg from a media standpoint is basically interpreted through the eyes of the coaching staff.

We're just trying to understand why they won't put him on the field.

2. Curtin is too stubborn to try something else

He could simply change the shape and remove the number ten entirely. You could play a 4-4-2, start Sapong, and play Bedoya next to Haris Medunjanin. 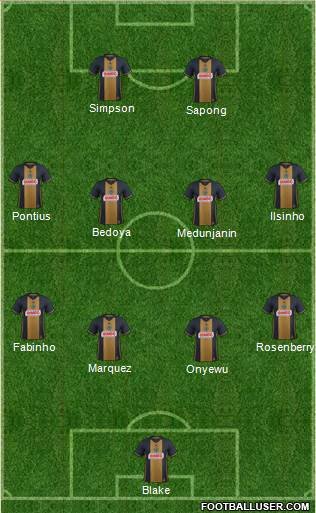 You could also keep the 4-2-3-1, move Bedoya to the right, and try someone else as a ten. There certainly isn't a lack of options.

We have to remember that Bedoya began his career as a winger, and that's where he has the most experience, even at the international level. The central role didn't really become prevalent until he moved to Nantes, which then resulted in some experimentation from Jurgen Klinsmann on the U.S. national team.

I think Bedoya on the right or left would work well for this team. Even in late-game situations, you can slide him out there in a move that allows flexibility in subbing.

3. You shouldn't move Haris Medunjanin and Derrick Jones from their current positions

I don't think this argument holds any weight. Both guys have been playing reasonably well, but I'd have no issue dropping Jones for Bedoya and inserting Alberg at the ten.

You don't have to worry about stunting Jones' growth or losing out on valuable minutes. He's already proven himself to be a starting-quality MLS player at 20 years old. He's going to be there when you need him for many years to come.

Let's not let a feel-good homegrown story distract us from the fact that you play to win the game.

If benching Jones for Bedoya allows you to get a fit and in-form Alberg on the field, then do it. You're killing two birds with one stone by putting Bedoya into his preferred position and giving yourself more attacking quality going forward. The downside is that you're putting a 20-year old with four career starts on the bench.

The bigger issue is shoe-horning your highest paid player into an uncomfortable position.