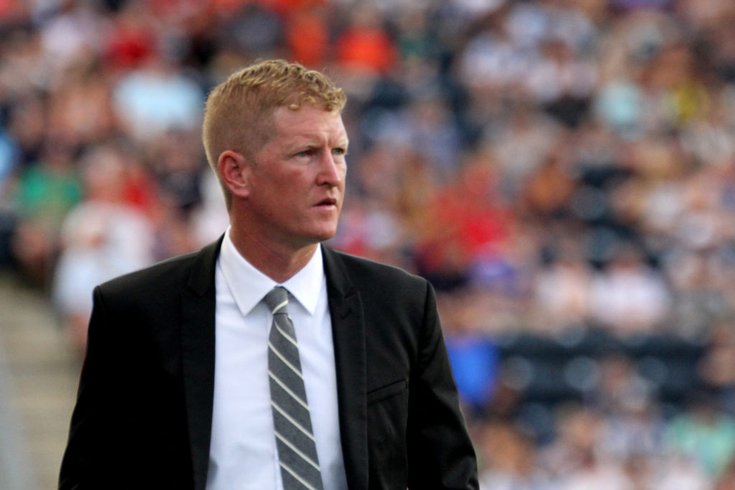 Under head coach Jim Curtin, the Philadelphia Union have not won a game since August 27th, 2016.

Peter Nowak had two wins, two draws, and seven losses when he was fired in the spring of 2012.

In 2017, Jim Curtin is 0-2-2 as the Philadelphia Union occupy last place in the Eastern Conference while ranking 21st out of 22 teams in the combined standings.

You'll find a lot of fans who are ready for a coaching change.

If this was Europe, it probably would have happened already. Foreign leagues are notorious for quick coaching changes, like the axing of Bob Bradley after 11 games at Swansea City. Managers are first to take the fall overseas while owners and players receive less of the blame.

MLS is the opposite. It's hard to get fired. Real Salt Lake got rid of Jeff Cassar a few weeks ago and Seattle won it all after removing Sigi Schmid last summer. Owen Coyle and Jason Kreis are a couple of other recent firings, but Ben Olsen, Jay Heaps, and Carl Robinson are still kicking with little talk of the hot seat.

How much time does Jim Curtin have left in Philly?

I can't make a serious judgment after four games. The Union played three on the road and one at home in below-freezing temperatures against last year's conference champion.

If nothing changes after April, which continues with three straight home games, then I think calls for Curtin's job will be justified. You have to climb out of the basement with three chances for three points at Talen.

Some fans point to the end of 2016 as justification for an immediate firing, which I do think holds some weight. The Union haven't won a game since August 27th, and while we're talking about two different seasons here, the reality is that the club has earned four out of 33 possible points in that time frame while also losing a playoff game.

It's been seven months since the last Union win.

The team looks disjointed going forward, tactics are predictable and stiff, and individual performances have been underwhelming, save for the play of C.J. Sapong, who is already six goals away from matching a career high.

Here are a few things to consider regarding Curtin's job security:

Curtin is getting more time than Hackworth and Nowak

Jim Curtin similarly had his interim tag removed at the end of the 2014 season, then coached the full 2015 and 2016 campaigns. He's now the longest tenured coach in a short franchise history.

I do think there's something to be said for continuity. When you sack a manager every two years, can you really build much of anything?

I've been a Jim Curtin guy for a long time, and this is painful to say. We need to make a change before this year is lost.

Curtin is still the youngest coach in the league

Remember when Rene Meulensteen was hanging around Chester?

About half of the Union board wanted him to be the next coach. The other half wanted to commit to Curtin.

Some of the Meulensteen backers were also high on Curtin, but wanted to keep him in the system for a few more years before considering him for the main gig.

It's resulted in some "on the job training," for sure. The leash is always going to be longer when you put faith in a young coach, just like the situation with Kliff Kingsbury at Texas Tech or Brad Stevens with the Boston Celtics.

Union ownership seems to be committed to Jim as a young coach who inevitably has to learn some things on the fly. He received his U.S. Soccer Pro License in the winter and he is part of the comprehensive project to streamline all aspects of Union soccer operations.

This franchise is willing to build organically and in-house, which seems to apply to Curtin as well as homegrown players.

Earnie Stewart is now in the picture

When Nowak and Hackworth were fired, Nick Sakiewicz, Jay Sugarman, and Richie Graham were the primary decision makers among Union ownership and the front office.

With Earnie Stewart fronting the technical staff as the first Sporting Director, does he have autonomy in the firing and hiring of coaches? Does the board vote? I'm not really sure how that works in 2017.

I'm going to assume that Stewart takes the lead in this department, which probably requires approval from ownership.

It's going to be hard to appreciate the genius of Earnie Stewart until the Union, you know, win a game

Stop whining about the media

There's a small section of the Union fanbase that becomes annoyed with the media because they feel like we don't ask "tough questions" at press conferences.

Those fans allege that we're afraid of "losing our access" or damaging our relationships with the technical staff and front office, which isn't true at all.

It was only two years ago that all five people who cover the team (part-time) were openly calling for Nick Sakiewciz to hit the road. We battled publicly and privately with the former CEO and Operating Partner, who was eventually let go.

The thing that pushed it over the edge wasn't any type of article or Twitter rant, it was the fan protest at PPL Park. Putting the image of Sakiewicz on a coffin and labeling him as a "Serial Franchise Killer" did much more in the influence department than anything myself or Jon Tannenwald or Matt DeGeorge could have ever come up with.

That's the myth here. Media pressure doesn't really resonate with front-office and ownership types. They listen to the fans, who have a larger presence and buy season tickets and hot dogs.

It's true that the media sometimes has a responsibility to spearhead these types of situations, but fans are perfectly capable of forming their own opinions and acting independently. We do have the privilege of face-to-face interaction, so that's one forum that we can work from, while supporters can't.

Sakiewicz threatened to pull credentials but never did. In eight years, only one person has ever had their Union credential yanked, and it was for misleading behavior, not something they said or wrote.

Congrats to Earnie Stewart for putting together the deepest squad of mediocrity in Union history. #philadelphiaunion #DOOP

We need to sort out the signings

The front office and technical staff transition in late 2015 muddles the personnel situation.

Who are Stewart's players and who are Curtin's players? How much of a role does Chris Albright have?

We do know that Stewart brought in Haris Medunjanin, Roland Alberg, Ilsinho, and Giliano Wijnaldum.

Curtin and Albright were likely responsible for the Chris Pontius signing and also knew Keegan Rosenberry through the youth setup. They signed C.J. Sapong in 2015. Alejandro Bedoya was originally targeted before Stewart joined the team.

Richie Marquez and Andre Blake were drafted during the Hackworth years. Fabinho was protected by Curtin in the expansion draft. Maurice Edu was signed on loan in 2014 and given a permanent deal in 2015.

Who signed off on Jay Simpson? What about Fafa Picault and Oguchi Onyewu?

Some people are beginning to sour on Stewart, just a little bit, so it's not unreasonable to try to figure out who is responsible for what here. It's also about giving credit where it's due, not just criticizing specific signings.

Right now, on April 4th, I think that calling for Jim Curtin's job is premature.

But we're getting much closer.