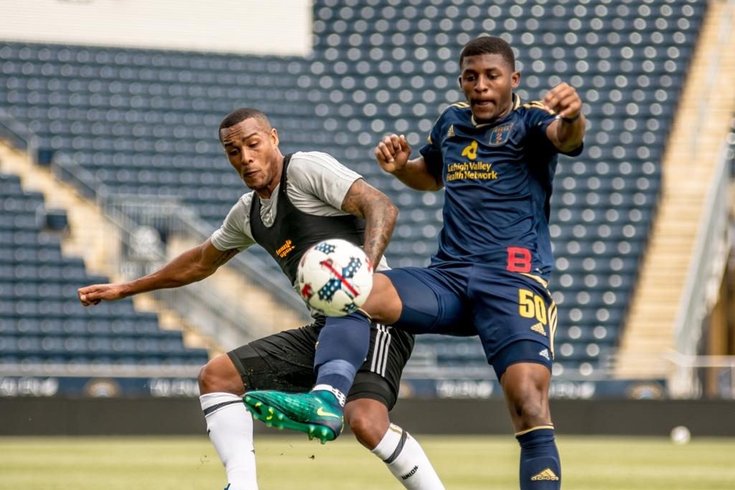 Union striker Jay Simpson is back to full health after suffering a lung bruise in the season opener on March 11.

Chris Pontius will play this weekend with a broken hand suffered in the 2-1 loss in Orlando. The winger is wearing a plastic cast on his right hand that covers about half of his thumb.

Union manager Jim Curtin referred to the injury as "annoying."

"People don't realize the amount that you use your hands in this game, whether it's grabbing or trying to get every little advantage, shoulder to shoulder stuff and pulling the jersey," Curtin explained. "You don't have the same kind of grip, so it does bother him. I won't say it doesn't, because I'd be lying. Even when you fall down and brace yourself, you tend to fall a bit awkwardly because you're trying to protect it and it hurts.

"All of those little things do add up. It's not something that will keep a professional soccer player, who is as hungry as Chris is, out of a game, but he's not going to be 100% going into this game."

Curtin also said that center back Josh Yaro is ahead of schedule in his return from shoulder surgery. The second-year defender appeared at training but is still being held out of team activities.

A meeting with Maurice Edu and team doctors was scheduled for later on Wednesday to discuss the veteran's broken leg and evaluate the last two months of rehab and recovery.

Missing from training were Alejandro Bedoya and Warren Creavalle, both of whom are returning from international duty. They are expected back on Thursday, and Bedoya will almost certainly be in Saturday's starting eleven.

"He'll be available, that's for sure," Curtin said of Bedoya. "Even if he had gone 90 minutes (Tuesday night), he's the kind of guy that wants to be in with our group. I thought he did very well against Honduras. It's a unique spot where you're called upon after an injury to go out and perform. I thought he really stepped up and gave Bruce a big effort. I think he's a guy that, it's clear that Bruce trusts and really believes in.

"He did a job also on Tuesday night in a shorter period, just 20 minutes, but in some ways I was kind of happy with that because I know he'll be that much more fresh going into the weekend against D.C. But in two good results for the United States, Ale played a role and did a good job."

The timing of two weeks off

Saturday's match in Washington comes two weeks after the Union's loss in Orlando.

Fourteen days can feel like an eternity after opening the season with three straight games. Some players enjoy the break, and others don't, like Pontius.

"I'd prefer for it to not to (take place)," said Pontius of the stoppage. "I'd prefer for that break to come later in the year when you run into heavy legs. But we'll get a break in the summer. I haven't looked at the schedule fully, but I'm sure there's some weekends off in there."

There are some benefits to the break. Striker Jay Simpson had an extra week to recover from the lung bruise he suffered in the 2-2 draw with Toronto.

"In the UK we have the international breaks," said Simpson. "Sometimes they don't have them in the lower leagues unless you have international players. I thought we started with two good draws, then obviously a disappointing result against Orlando.

"But I think the break has allowed us to get on the training field and put a lot more work in. When you're a player you want the games to come thick and fast, but you have some time on work on things and reevaluate."

Simpson pointed out that the FIFA calendar, which is used in England, doesn't pause for international duty until late September. The domestic season begins in mid-August.