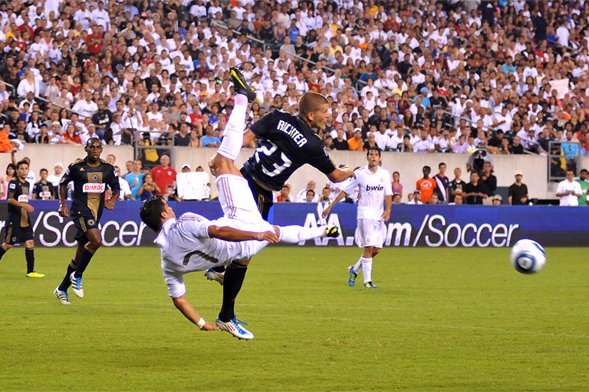 The Philadelphia Union played Real Madrid in front of 57,000 fans at Lincoln Financial Field in 2011. The most expensive ticket was $150 and the cheapest ticket was just $30.

Thursday morning, I went to StubHub to check out ticket prices for the Barcelona and Real Madrid exhibition game taking place this July in Miami.

The most affordable ticket was $540 for the nosebleed section.

Seats behind the goals started at $900 while midfield tickets averaged $1,500.

Ticketmaster, meantime, had a $350 "standing room only" ticket on the upper deck. There was another $450 ticket for an alcohol-free "supporter's section," also on that same level, which is reserved for Barca and Real fans.

If you want to take your kid to see the the legendary Spanish sides play the "El Clasico" rivalry game in the United States, you'll probably pay upward of $1,000, and that's without parking, food, and transportation. That's also assuming you only have one kid.

For that kind of money, you can fly to Spain and watch the teams play each other in a game that actually matters.

I found a flight from Miami to Madrid, with a layover in Lisbon, for $597. I also found a direct flight from Miami to Barcelona for $804. Add two nights in a hostel, a cab to the game, and a ticket that costs around 100 Euros, and you're seeing these teams in Spain for the same price as a corner seat at an exhibition game on this side of the Atlantic.

Let's not be distracted here; this is a straight-up cash grab disguised as a prestigious, once-in-a -lifetime event.

More than 65,000 suckers will pay to watch a few stars and some backups give a half-assed preseason effort. And if the players actually care, then we'll probably see the typical whining, flopping, and play-acting from Sergio Busquets and the like.

The person going to this game is the type that gets up at seven in the morning to watch Arsenal vs. Chelsea at Fado in Center City Philadelphia. He probably has a Theo Walcott jersey that he also wears to the noon pickup game at YSC Sports. This guy is a diehard soccer fan who could give a rat's ass about the Philadelphia Union and probably thinks that "the MLS sucks."

That's the guy. He comes to the Tuesday night futsal game wearing a Barcelona tracksuit, claims to be a striker, then whiffs on his first shot attempt from five yards out.

The people paying $750 dollars for "El Clasico" tickets are not our friends. They don't care about David Beckham's Miami MLS project. They don't watch MLS, NASL, or USL because domestic soccer "isn't as good" as whatever beIN Sports is showing on Saturday morning.

No one is going to sit here and tell you that MLS is better than the English Premier League, but it's our league, and that's what really matters. And God forbid you actually watch top-level foreign soccer while also supporting the fledgling team down the street.

At a time when dedicated American soccer fans are working at the grassroots level in Tampa, Fort Lauderdale, and South Florida in general, 65,000 Eurosnobs will be grossly overpaying for tickets to a friendly, and that's disappointing.

I won't necessarily blame promoters for the prices. The clubs charge extraordinary fees for these games, which is why the dollar amounts are so high. It's supply and demand, and unfortunately, Americans still demand meaningless summer friendlies.

As a counterpoint, I do understand the significance of playing this game outside of Spain. Only once has "El Clasico" ever taken place in a foreign country, and that was in 1982 when the sides met in Venezuela for an end-of-season friendly. Only a few thousand people showed up, and the match was not broadcast in Europe. The focus that summer was preparation for the World Cup and that friendly became somewhat lost in the footie annals.

It certainly would be cool to see El Clasico outside of Spain, but who wants to be second to do anything? Nobody says, "I saw the second-ever Bruce Springsteen show in Asbury Park!" This is being billed as the "first 'Clasico' on North American soil," but that doesn't do anything for me.

Do Londoners brag about seeing the second-ever NFL game at Wembley Stadium? No, they don't, and they also weren't charged a thousand pounds for tickets.

I won't necessarily blame promoters for the prices. The clubs charge extraordinary fees for these games, which is why the dollar amounts are so high. It's supply and demand, and unfortunately, Americans still demand meaningless summer friendlies.

The irony is this; if you're a huge Lionel Messi or James Rodriguez fan, you could have paid LESS money to see them play in REAL games just last year. You could have paid for Copa America tickets, which were still expensive but nothing like this. Average ticket prices for the group stage and quarterfinal games were in the $150 range, while the semifinal and final pushed higher. The average ticket price for the group stage game between Argentina and Chile in San Francisco was just $236.

Philadelphia has shown a waning interest in these games for the better part of six years now.

During the Union's 2010 expansion season, a friendly against Manchester United drew 44,000 fans to Lincoln Financial Field. The next year, 57,000 showed up for an exhibition against Real Madrid. Friendlies against Celtic, Chivas, and Everton sold out the much smaller PPL Park, and the Union front office complained when U.S. goalkeeper Tim Howard didn't make the Toffees' trip. Nevermind the fact that players like Tim Cahill, Leighton Baines, and Phil Neville were actually on the field.

Anyway, that Real Madrid vs. Union game back in 2011 had a totally reasonable ticket structure. Front row tickets were the most expensive at $150 a pop. Club midfield seats were $125 and the sidelines and corners were priced at $60 and $40, respectively.

One Union supporter told me that he paid $215 for four tickets in section 115, which is the lower bowl near the south end zone. That's absolutely fair.

In 2012, the Union hosted a wildly successful MLS All-Star game against Chelsea with ticket prices that averaged under $100. In two other cases, they could not sell out games against Schalke and Aston Villa. Maybe it was a little bit of friendly fatigue, or oversaturation, or the product of playing two teams that didn't move the needle like a Real Madrid or Man United.

Later in 2012, Real played Celtic in front of just 34,000 fans at the Linc. Two years after that, around 5,000 people came out to see Roma play Inter in a flop of a game. Ticket prices for both of those matches started around $75 and went into the $200 range. In Michigan, meantime, 109,000 fans watched Real play United at the University of Michigan's "Big House."

The takeaway for me is that the biggest teams in the world will always draw in America. I'm grateful for the opportunity to see these clubs, but I can't justify spending $1,000 to do it.

Neither can you, it seems.

Let me put it this way, how much would you be willing to pay for a high-profile exhibition game in the U.S.?

The Union, to their credit, have steered away from the summer friendly routine and generally now only host one mid-level team per season. Recent years have seen two friendlies against Crystal Palace, and one each against Bournemouth and Stoke City. There was also a strange, late March friendly against Mexican side Pumas.

The most I've ever paid for any ticket was $250, and that was for last year's Guns n' Roses show at the Linc. I felt like that was justifiable, since you never know if Axl Rose will ever show up for anything again. For me, it was a "bucket list" item.

And maybe "El Clasico" is on your bucket list, so go ahead and buy that $750 ticket while continuing to thumb your nose at the American game.