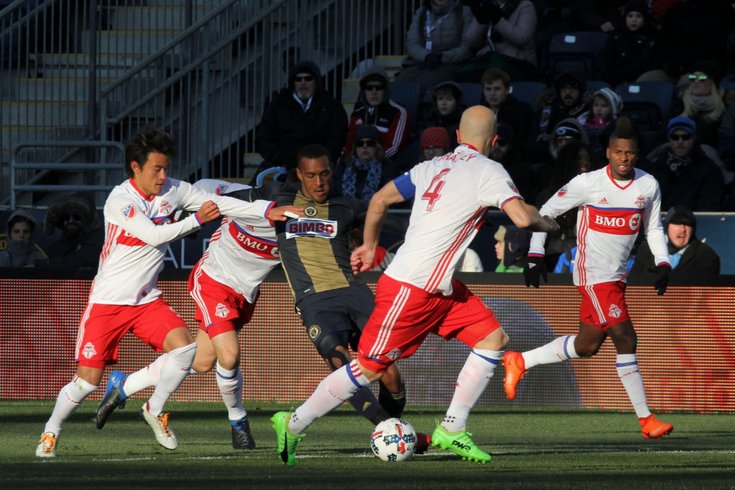 Jay Simpson scored in the first half against Toronto FC, then watched the second half from the hospital after suffering a bruised lung in a goalkeeper collision.

It seems like Union strikers suffer some kind of horrific injury at the start of every season.

C.J. Sapong had a facial fracture and concussion in 2015. Fernando Aristeguieta followed that up with a broken hand. Conor Casey usually wasn't even fit enough to play until April.

For Jay Simpson, it was a lung bruise from a goalkeeper collision in the 2017 home opener against Toronto FC.

The first-year forward returned to training this week and says he's feeling "not too bad."

"I didn’t realize until I watched it back, but I got a knock," said Simpson of the play. "I wasn’t sure if it was an elbow, foot, or knee, but watching it back, I realized it was a knee to my ribs from the goalkeeper. I didn’t feel the impact at the time, and it didn’t feel so serious. It was just like a normal knock. That was on that goal. After the restart, trying to spring, I couldn’t catch my breath back, started a coughing fit and starting coughing up blood, so then I knew something was up."

Simpson came off the field 10 minutes after scoring his first MLS goal. Until that point, it was probably sensory overload and a rush of adrenaline that carried him forward.

"When you score, obviously the emotions take over," Simpson said. "You run off the adrenaline and you feel great and you always feel like you’re going to go on and get another (goal). I felt the knock at the time but it wasn’t painful. It felt like a normal clash with someone until I tried to carry on and it was just getting worse all the time."

29' | Simpson takes a knock and is subbed out. Sapong in. #JoinOrDie

"It’s very disappointing I had to come off, but I knew I wasn’t going to be able to help my team or perform well after the knock," the striker explained. "As I was struggling to breathe, I thought it was fairly serious so I needed to come off, but it was definitely frustrating. (We're) one-nil up, I was feeling good, (making my) home debut in front of the Sons of Ben. It was a great start to the game, but disappointing to come off. I managed to watch the game in the hospital, which was good. We did well to come back from a goal down."

Sapong, now second on the depth chart, came on to score the Union's second goal in that 2-2 draw. He followed it up with another goal in Orlando last Saturday.

It's an interesting situation for head coach Jim Curtin, who has a veteran striker in good early season form and a newcomer who scored on his home debut.

"Jay trained Wednesday for the first time fully," Curtin said at his midweek press conference. "The guys have been off. We gave them off a day, so Jay has been back here training while we were in Orlando, keeping the fitness up. He didn't experience any pain with it. He's a quick healer, so that was a positive. It didn't seem to be limiting him at all (Wednesday) when he was out on the field. We trained in the stadium due to the 50 mile-per-hour winds (laughs). He had no trouble breathing. At this stage, it kind of feels like a bruise would feel, like a dead leg or whatever in a different area of the body. He should be fine for next weekend."