What does it mean to be a Philadelphia Union fan in 2017? 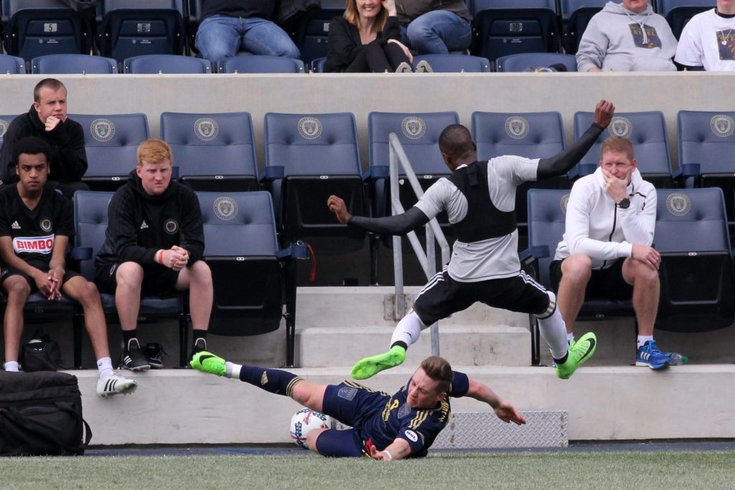 After three games to start the season, we come to a screeching halt with the late-March international break.

It's one of those MLS scheduling quirks, where we build some momentum in the first three weeks, then pause for 14 days for World Cup qualifiers and friendlies. For whatever reason, six MLS teams played this weekend, while the rest were off.

The Union were part of the latter category, which gives us a moment to step back and take the temperature of the fanbase.

What are the positives and negatives surrounding this club in 2017? What does it mean to be a Philadelphia Union fan right here and right now?

As a simple exercise, I decided to write down a list of positives and negatives from my perspective, then compare that to what you told me for a true feel on how people view this franchise.

• Balanced salary cap and a commitment to building roster depth

• Shrewd use of Targeted and General Allocation Money

• Completion of training fields and facility should allow money to be budgeted elsewhere (i.e. the finalizing of one-time infrastructure projects)

• Commitment to tactical shape and an on-field identity

• Still a great gameday experience at a beautiful stadium

• The team hasn't won a game since August 27th

• Despite the playoff appearance, Union finished in 13th place with another losing season in 2016

• Maurice Edu hasn't played since 2015 due to consecutive, severe injuries

• Five injuries in one year for Josh Yaro

• Public transportation to Chester is a mess

• There's nothing to do in Chester before and after games; the surrounding area is bleak

• Jay Sugarman still comes across as an absentee owner

• No star power on this team, no needle-moving superstar or true goal scorer

• Overall lack of ambition and spending compared to other MLS clubs

• Lack of tactical flexibility and the preference for hard working, two-way grinders

• Depth is important, but is the starting eleven good enough?

That's what I came up with.

A lot of the positives had to do with a renewed commitment to youth and the streamlined approach to roster building. The Union aren't throwing money at pricey superstars, but they do have a proper infrastructure in place and the academy will start producing more first-team players. The pipeline from academy to Steel to the Philadelphia Union is now firmly in place and we should all be looking forward to more homegrown signings.

I am a bit wary of handing out too much praise for the completion of the training fields and training center. The Power Training Complex is a top-notch facility and the adjacent pitches really make it seem like this is a legitimate and professional franchise. We've come a long way from training at a public park in Wallingford.

But this is basic infrastructure that every professional franchise should have. It didn't get done until 2015 and 2016. I'm reminded of the Chris Rock bit where he talks about people wanting credit for things "they're supposed to do."

Going along with that theme, a lot of the front office positives are the direct result of cleaning up negatives. Tim McDermott is a big upgrade over Nick Sakiewicz, but most people are. Getting rid of Sakiewicz's lackeys was another positive step, but also necessary.

When the "floor" is total dysfunction, then you can really only move in one direction.

The true credit revolves around the addition of three new executives and a renewed focus on the gameday experience and brand definition. There really aren't any egos in the front office, and you have a staff that spends time really working instead of just talking. The Talen experience is still excellent and the front office is building on that. The ticket sales department is larger, the social media is sharper, and the connection with the fans seems to be stronger. Supporters aren't marching to the stadium carrying a coffin in 2017.

When it came to positives, these were the top three:

• Commitment to youth and building through the academy

I ran a poll about a week after asking the original question, and here's how it turned out:

1. What is the biggest positive surrounding the franchise in 2017?

Most people pointed out that the Earnie Stewart and "youth commitment" ideas go hand-in-hand, which is somewhat true. He's also the first person to ever be in his specific position, so I'd point out that he has a hand in much more than just academy and youth development. He's basically a two-man scouting department with Chris Albright.

As far as negatives, the three most mentioned were:

• A perceived lack of ambition / not enough money being spent

Another poll for the negative side of things:

2. What is the biggest negative surrounding the franchise in 2017?

Some of the most alarming comments I received splashed cold water on the Stewart honeymoon after just 14 months, which feels premature to me. Though Earnie's addition reignited hopes in 2016, some fans feel like nothing has really changed, mostly due to the fact that ownership's player-personnel budget has not given Stewart the ability to make significant moves. They pointed to the idea of spending seven-figures on Alejandro Bedoya, then going to the English fourth division for Jay Simpson and signing Oguchi Onyewu as a free agent.

There was an overwhelming sense of despondency among fans who feel like the new-look Union won't be good enough to compete with the likes of Toronto FC, Seattle, and New York City, who are spending lots of money while also producing homegrown talent and exploring all avenues of player acquisition.

These are some comments you left me on Twitter: 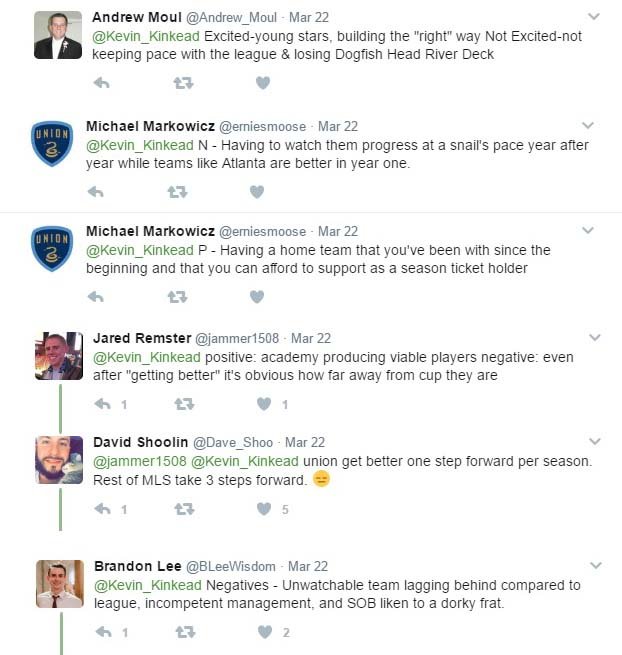 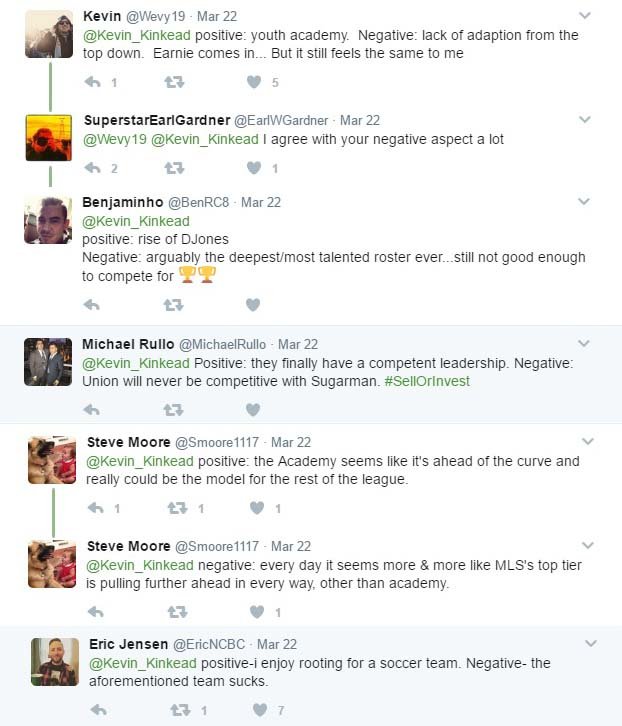 I received a few emails that expanded on these topics.

George talked about cohesion between the front office and technical staff:

"I've been a season ticket holder from day one and it's great to see that the Union have a plan which they are sticking to. From ownership all the way down through the front office execs and staff, they all seem to be focused on the same thing, which is to make sure that the Union are successful both on and off the field. You can argue and try to make a case on whether they will be successful with this approach of building through youth and undervalued foreign signings, but what someone cannot dispute is whether they are staying true to their plan."

You can say what you want about "Moneyball," but there is top-to-bottom cohesion in Chester.

One negative that people mentioned was the Union's failure to gain ground on the Flyers, Sixers, and Phillies in terms of interest and popularity. Some pointed out that the Union left the window of opportunity wide open while the city's four major teams were going through various stages of rebuild.

Here's one fan's take on that topic:

"(A negative is) how irrelevant we are within the Philadelphia sports landscape as well as in MLS. Granted, I follow MLS pretty closely with the Direct Kick package, so I know most of the teams very well, but I'm always surprised when I talk to my friends who are MLS fans in other markets, they don't know most of our starting XI. One of my best friends from childhood is a Red Bull season ticket holder, so we usually watch all of the Red Bull-Union matches together in person and he probably couldn't name most of our starting XI every year. Granted, he doesn't follow the league as closely as I do, but if you watch a team play live 3 to 4 times each year, I would expect you to know them pretty well especially when you consider how little both John Hackworth and Jim Curtin change their starting XI during the season. Just look at all of the latest expansion teams since the Union joined MLS and every one of them (except maybe Minnesota) has a higher profile than the Union among MLS fans. That's tough to take."

I'd argue that Atlanta's roster is already better than any starting eleven Philadelphia has ever put on the field. They've also spent millions of dollars on expensive foreign players, which the Union aren't going to match.

Cash still rules, even in a single-entity, closed league with salary cap restrictions.

The other main complaint was the location of Talen Energy Stadium, which was supposed to have accompanying retail and restaurants on the waterfront. When the 2008 recession hit, those plans were scrapped, and we instead ended up with an amazing stadium on a boring and bland stretch of the industrial highway.

"The whole idea of Chester was to build it up and supply jobs and give it some form of identity, instead of a place where suburban families would lock their car doors at traffic lights. Is that going to happen? Or was that just an excuse to make us feel better about building a stadium 30-40 min from downtown?"

There's still no reliable public transportation to the stadium, which isolates the region's urban and millennial core. Owner Jay Sugarman has spoken of improving that situation as a main priority going forward. He also would like to transform the one-mile stretch of waterfront property surrounding the stadium and turn that area into a Union "campus," though no real plans have been revealed.

But more than anything, Paul summed up fans' thoughts in this message:

At the end of the day, I don't think anybody disputes the idea that the Union are heading in the right direction. There is a true rapprochement between the front office and technical staff, and that has created a defined plan moving forward. The prior situation was noxious and untenable.

The issue, as I mentioned before, is that when you hit rock bottom, there's really only one way to go, and that's up. You can't do much worse than 19th out of 20 teams, which is how the Union finished in 2015.

Anyway, enough with the "Negadelphia." We know the team is moving forward, and there are a lot of positive things happening. I think most of us would agree that the club is committed to youth and doing things "the right way."

Now isn't necessarily the time to make sweeping judgments, but let's revisit all of this in a few months.