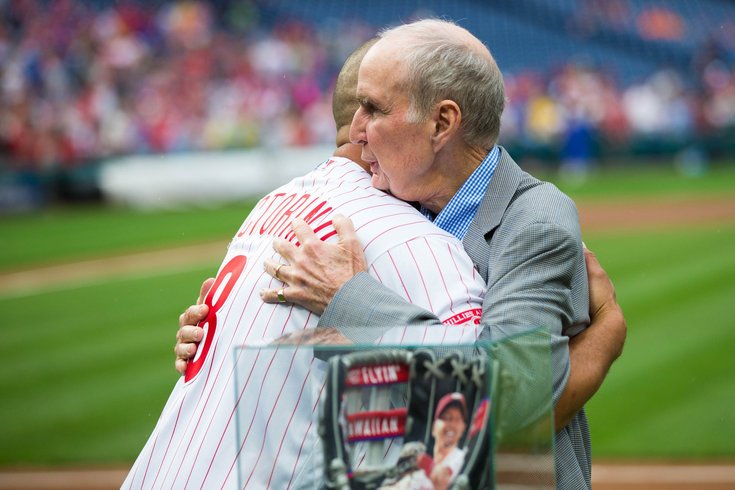 Philadelphia Phillies chairman David Montgomery died Wednesday, May 8, 2019, ending a five-year battle with cancer. Montgomery was 72. He began working with the Phillies in 1971. Above he is shown hugging former player Shane Victorino during Victorino's retirement ceremony at Citizens Bank Park on Aug. 3, 2018.

David Montgomery was cutting it close. His plane had just landed at O’Hare and he was due at the quarterly Owners Meetings in downtown Chicago in less than an hour. This was three years ago and the Phillies Chairman still served on several integral Major League Baseball committees. He didn’t want to be late.

The point of this story isn’t that Montgomery, whose five-year cancer battle first cost him his position as club president and then, last Wednesday, his life didn’t leave himself more wiggle room. The point is why.

It was because, the night before, Chase Utley returned to Citizens Bank Park for the first time since being traded to the Dodgers. And Montgomery wanted to be there. More than that, felt like he should be there. To say hello to Utley, to shake his hand, to look him in the eye and personally thank him for everything he’d done for the organization.

Multiply that story by hundreds and you can begin to get a fuller understanding of why there was such an outpouring of emotional remembrances after he passed away at the age of 72. Why the Phillies will honor him Monday night before the homestand opens with a game against the Brewers.

Yes, he had an uncommon humanity, knew and took a personal interest in even those who worked part-time for the team. Yes, he insisted that everybody call him by his first name. Yes, he had the unusual ability to understand that as much as he was responsible for the franchise he ran, he also saw clearly how that fit into a bigger picture that included the welfare of the community and MLB as well.

What really set him apart, though, was that he grasped the symbolic importance of simply being there.

Even as he got older, even when he was at pretty much the peak of his profession, even when he was gravely ill and could have been excused for wanting to be home at a civil hour most nights, whenever he thought he needed to appear in person he almost always did.

And he didn’t do it like some sort of visiting potentate, either. Take the night Utley returned to South Philly. Certainly Montgomery could have justified taking a private jet after the game. Or, at a bare minimum, he could have flown first class in order to get off the commercial flight as quickly as possible and then had a limousine waiting to whisk him to the hotel where the meetings were being held.

Instead, he flew coach and waited in the taxi line with everybody else. Which was always his low-key way.

(There are hilarious stories about team employees using frequent flyer miles to upgrade on a flight, settling into their plush seats and then looking down sheepishly when the president of the team passed by to get to his seat in the back.)

Remember Cody Asche? Montgomery did. Once considered a building block for the future, Asche was quietly released following the 2016 season. He signed with Triple-A Charlotte and got quite a surprise when the Knights made their first trip to Lehigh Valley the next season.

“I didn’t make it back into the clubhouse until late after the game because David Montgomery had made a special trip that night to see me,” Asche posted on Twitter. “Walking through the door and seeing him there waiting to greet me meant the absolute world to me. I will be remembered by few for my time in a Phillies uniform but David made sure I knew he was one of them.”

By then, Montgomery had already been diagnosed with jaw cancer. It went into remission for awhile but had returned with a vengeance by last July. That didn’t prevent him to from going to Cooperstown for Jim Thome’s Hall of Fame induction. He wanted to be there because of what Thome meant to the Phillies. . .even though he was being enshrined as a member of the Cleveland Indians.

Last fall, despite being alarmingly frail, he flew to Houston for the wedding of Indians executive vice president, business Dennis Lehman’s son. Lehman, by the way, hasn’t worked for the Phillies since 1988.

There are countless examples of Montgomery making the effort to make a personal appearance. Again, multiply by hundreds.

A personal story: David and I didn’t always see eye to eye. During the bad old days at Veterans Stadium days from mid-1990s to the early 2000s, I thought the team should spend more money up front, reasoning that if you build it (a winning team), they (paying customers) will come (to justify the expense).

He believed that payroll should follow revenue. To his credit, he allowed spending to rise dramatically a year ahead of the opening of Citizens Bank Park and kept his promise to keep spending after that, which led directly to five straight division titles, two pennants and winning the World Series from 2007 through 2011.

Despite those disagreements, when I took a buyout from the Philadelphia Daily News, he arranged a freelance agreement that helped make my financial ends meet. And when I was fortunate enough to win the J.G. Taylor Spink Award, he not only made the long drive to Cooperstown to be there for the 2013 presentation, he threw a classy lunch for everybody who had come to help celebrate the occasion. He gave an eloquent and generous speech and invited me to throw out a first pitch at the next home game.

Of all the qualities that made David Montgomery exceptional, for me the most striking is how he went the extra mile. Both figuratively and literally.

And that meeting in Chicago? He made it on time.