Paul Hagen: Will Bryson Stott be great? You never know with Phillies prospects 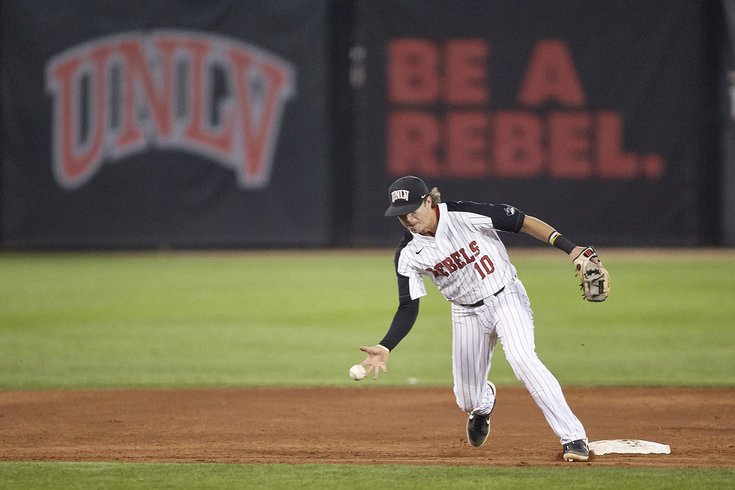 Bryon Stott will begin his journey to the majors in the Phillies low farm system.

So, congratulations to UNLV shortstop Bryson Stott for being the Phillies first-round draft pick Monday night. And, let’s remind ourselves once again all that he's guaranteed is a sizable signing bonus; the slot value for the 14th player selected overall in this year’s draft is $4,036,800.

On the day a player is picked until he signs, all his positives are accentuated. Then, once the development process begins, teams zero in on his faults to try to make him better. That’s just the way it goes.

And all along the way everybody knows that some No. 1s are home runs and some are swing-and-misses. Here’s a story that puts that point into sharper perspective.

In August, 2015 I found myself in Clearwater. It was late in the Class A Florida State League season but the Phillies had a lot of prospects they really liked on a club that was headed for the playoffs. I decided to do a feature story to spotlight one of them. But who? Nobody seemed to have an opinion on who was the player with the best chance to be a breakout star. Outfielders Andrew Pullin, Dylan Cozens, Carlos Tocci and Aaron Brown were all mentioned.

So was first baseman Rhys Hoskins, who was taken in the fifth round out of Cal State Sacramento the previous June.

Yeah, yeah. Should have picked Hoskins. Now you tell me. But the point is that, even though he was a 21-year-old college player who was finishing his second season in the organization and nobody predicted he’d be the one who – just two years later! – would finish fourth in the National League Rookie of the Year voting despite not being called up until August 10.

How different would that scouting report look today?

Anyway, here’s what Threshers manager Greg Legg had to say about the first baseman back then: “He’s shown power the other way and to the pull side. He’s been fun to watch. He’s a tough out. It doesn’t matter who’s throwing and he’s got a chance to be an RBI guy in the middle of the lineup.”

Legg added that while he didn’t like to make comparisons, Hoskins reminded him a lot of Darin Ruf at the same point of his career. Hmmmm.

The manager’s comparison for Cozens was Jay Bruce, kind of funny since the Phillies just traded for him this week. Anyway, here’s Legg’s scouting report on the big outfielder: “Outstanding raw power. A guy that’s kind of learning to hit right now this year. . .The raw power is very intriguing. Very talented young man. Great size. Great strength. You’ve got a guy there who could be real special. He could be one of the guys who hits 40 for you.”

Pullin? “Dead red. If you throw him fastballs, he’s going to hurt you.”

Aaron Brown? “Right now he could probably play defense in any league at any of the three (outfield) positions. He’s a plus defender with an opportunity to be a really good hitter.”

He’s a plus defender with an opportunity to be a really good hitter.”

This isn’t to criticize Legg who, to be fair, was probably going to shine the best possible light on all his players regardless. Again, it’s just to point out that the reason he didn’t single out Hoskins is that nobody could confidently predict that he would so quickly separate himself from the pack.

Outfielder Adam Haseley, the Phillies No. 1 pick out of the University of Virginia in 2017, was called up after Monday night’s loss to the Padres, an interesting development especially when juxtaposed against Andrew McCutchen’s injury and Odubel Herrera’s continued purgatory after being arrested following domestic violence allegations.

Last year’s No. 1, third baseman Alec Bohm out of Wichita State, is expected to be promoted to Double-A Reading shortly.

The two years prior to that, the Phillies opted for high school hitters. Cornelius Randolph, 22, was hitting .223 at Double-A Reading through 40 games. Mickey Moniak, who just turned 21, was hitting .261 through 50 games. It’s too early to draw conclusions on either; after all, they’re both approximately the same age now as Haseley was when he was drafted.

And it’s not just draft choices. The Phillies have been reluctant to commit big money to sign a player in the Latin American market, preferring to spread their money around and mine for quality among the quantity. It’s a strategy that has served them well.

Except that in 2015 they gave $4 million to strapping 16-year-old Jhailyn Ortiz. Still just 20, he was hitting .217 with seven homers and 61 strikeouts in 157 at bats in Clearwater. Like Randolph and Moniak, it’s still too early to judge his future.

Cozens, meanwhile, recently underwent season-ending foot surgery. He’s made a couple brief big league appearances but has yet to establish himself. Tocci is a Triple-A Nashville in the Rangers system. Pullin retired after playing last season at Triple-A Lehigh Valley. Brown, then an outfielder, is now a full-time pitcher at Reading.

By the way, I decided to write about Willans Astudillo four years ago, intrigued by the fact that he almost never struck out. He ended up whiffing just 10 times in 385 at bats for the Threshers that season. He’s currently a back-up catcher for the first-place Twins. . .and has struck out three times in 104 at bats.