Peacock documentary 'I Love You, You Hate Me' promises to reveal dark side of Barney the Dinosaur

The two-part docuseries will premiere on the streaming service Oct. 12 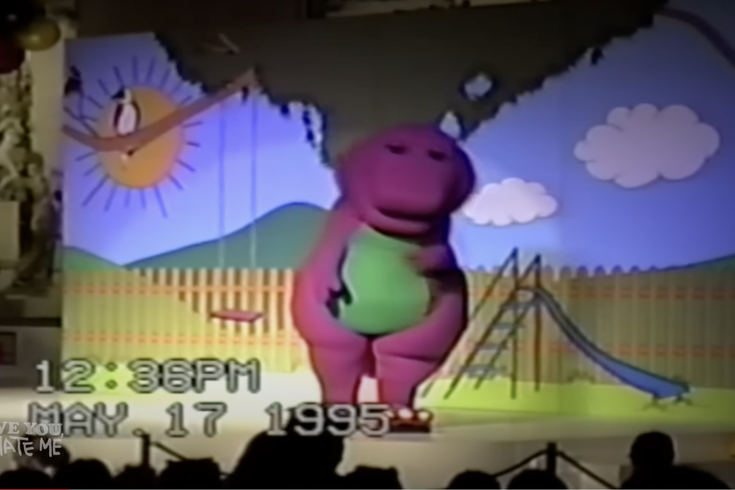 Peacock released a trailer for 'I Love You, You Hate Me' a documentary about Barney the Dinosaur, star of "Barney & Friends," that explores how people turned against the popular children's character as it peaked in popularity. The two-part documentary premieres Wednesday, Oct. 12.

Whether on PBS or one of those white VHS tapes, most kids who grew up in the 1990s remember plopping themselves down in front of a television and hearing a purple dinosaur singing 'I Love You.'

The children's show "Barney & Friends" was a cultural phenomenon that delivered educational messages while teaching about love, acceptance and forgiveness. The series became popular and the main character could be seen on everything from clothing and toys to bubble bath and toothpaste.

However, there are always pitfalls to success and the new Peacock original "I Love You, You Hate Me" promises to explore the dark side of the hit television show. The two-part documentary premieres on Oct. 12. on the streaming service Peacock.

The trailer for the two-part documentary was  released Wednesday. It focuses on how people became disillusioned with the friendly Tyrannosaurus rex's values and turned against him. A description of the series says it chronicles "the rise and fall of Barney the Dinosaur’s furious backlash — and what it says about the human need to hate."

"From Barney-bashing to frat parties to homicidal video games, something in American society broke into a million pieces, and it's never been put together again ... or is this just who we were all along?" the shows description reads.

"I Love You, You Hate Me"was directed by New Jersey native Tommy Avallone, best known for his documentary, "The Bill Murray Stories." It was produced by Scout Productions, creators of "Queer Eye for the Straight Guy" and Oscar-winning documentary "The Fog of War."

Bob West, the voice of Barney from 1992 through 2000, said in the trailer that as the character became a rock star, rumors began to swirl about the person in the suit. One suggested that he was hiding drugs in the Barney costume.

West also said that people made "violent and explicit" threats to his family – including how they were going to find him, kill him and dismember him.

TV weatherman Al Roker is featured in the trailer and said that as the series hit the stratosphere of popularity, people couldn't accept that it was only a show and began to bash it and its characters.

Barney was created in 1988 by author Sheryl Leach after realizing her children had outgrown some of the programming targeted towards kids. The idea developed into home videos titled "Barney and the Backyard Gang." In 1991, the idea of a television show for PBS was in the developmental stages and "Barney & Friends" debuted in 1992.

The last episode of "Barney & Friends" aired in 2010. During its run, the show gave future stars, like Demi Lovato, Selena Gomez, Debbie Ryan and Madison Pettis, some of their earliest acting credits.