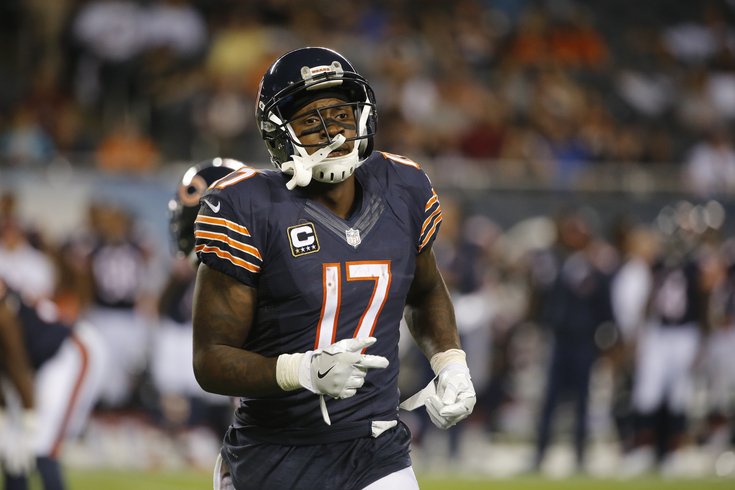 Over the last two days, reports have emerged that the Eagles have been looking to add to their receiving corps prior to the trade deadline on November 1, namely the Chicago Bears' Alshon Jeffery and the San Francisco 49ers' Torrey Smith.

According to Doug Pederson, that's not happening.

"There's no legitimacy to that," said Pederson, "and I'm thrilled with the guys we have, and going to work with them every day."

"I think every team is trying to upgrade every position if they could," he said, "but not at this time, no."

Smith is similar to the profile of wide receiver the Eagles brought in this past offseason, when they tried unsuccessfully to add a blazer who could take the top off a defense. They signed speedy receivers Chris Givens and T.J. Graham, who both ran a 4.41 40 at the 2012 Combine. Both Givens and Graham could not make the 53-man roster.

Smith fits the profile of a deep threat. He too ran a 4.41 at the 2011 NFL Combine, and has a 17.2 yards per catch average. However, unlike Givens and Graham, Smith has actual NFL production, having amassed 4,453 career receiving yards and 36 career TDs.

The Eagles don't currently have a deep threat opposing defenses have to respect. Smith could be a good fit for the Eagles' offense, giving Carson Wentz a legit vertical option in the passing game, while also opening things up underneath for players like Jordan Matthews, Zach Ertz, and Darren Sproles.

Agholor, Huff, and Treggs have combined for one reception of over 20 yards this season.

As for Jeffery, the Eagles were reportedly trying to trade for him, but would "need him to work out a long term deal," according to Benjamin Allbright, "featured contributor on WIP."

Huh, #Eagles are trying for Alshon Jeffery after all.

Would need him to work out long term deal. Mid round pick to #Bears as compensation.

However, according to page 46 of the NFL's Collective Bargaining Agreement, the deadline for teams to sign franchise-tagged players to a multi-year contract was July 15.

Any Club designating a Franchise Player shall have until 4:00 p.m., New York time, on July 15 of the League Year (or, if July 15 falls on a Saturday or Sunday, the first Monday thereafter) for which the designation takes effect to sign the player to a multiyear contract or extension. After that date, the player may sign only a one-year Player Contract with his Prior Club for that season, and such Player Contract may not be extended until after the Club’s last regular season game of that League Year.

In other words, the Eagles would be unable to sign Jeffery to a multi-year deal until after the last regular season game, should they trade for him.