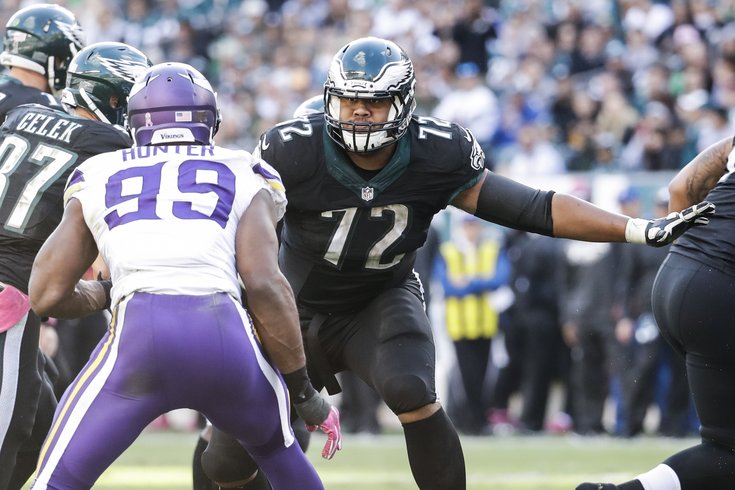 Halapoulivaati Vaitai was better against the Vikings, I guess.

In his debut NFL game against the Washington Redskins a couple weeks ago, rookie RT Halapoulivaati Vaitai was over-matched by Ryan Kerrigan and the Redskins' defense. His name was called early and often, and not in a good way.

Against the Minnesota Vikings last Sunday, aside from a false start on the Eagles' second offensive play of the game, Vaitai's name wasn't mentioned all that much, which is a good thing for offensive linemen, especially embattled ones trying to bounce back from a poor performance. As such, the assumption was that Vaitai played much better against the Vikings than he did against the Redskins.

But did he really, though?

Vaitai was certainly better, but serious concerns remain at the RT spot, after having reviewed the film. To begin, the Eagles gave Vaitai quite a bit of help, often keeping a running back or a tight end in to chip on his man.

Here's a more extreme example of the kind of help the Eagles gave Vaitai. Here the Eagles keep eight in to block at the end of the first half. For proper context, the Eagles could not afford a sack here, as they were already in field goal range with no timeouts left. Still, note that the Eagles kept a tight end in on Vaitai's side, with TE Trey Burton lined up in the backfield, who is also giving Vaitai help on the edge.

Again, that is an extreme example, but there were single-digit occasions in which Vaitai was asked to pass protect one-on-one.

Here's a block by Vaitai in which he doubles on a defensive tackle already engaged with Brandon Brooks. This is an easy block, but Vaitai drives him into the ground.

Here's a play where Vaitai is run blocking, and he is able to drive the DE off the line of scrimmage. As you can see, there's a low snap that is not handled by Wentz, and this play could have gone horribly wrong if Vaitai didn't defeat his man here.

Here Vaitai gets to the edge quickly on an outside run, opening a lane for Ryan Mathews.

Here he shows some awareness in pass protection, as his man drops into coverage. Instead of turning his back on the defender and potentially getting okee-doked, he waits until the defender is clearly in coverage and then looks for someone to hit.

Golf claps for the above, but clearly, there's nothing special there. Now for the bad.

This isn't much of a move at all by the DE, but he beat Vaitai inside. If Wentz doesn't throw in rhythm here, he's meat.

Here Vaitai doesn't get his hands on Danielle Hunter, who beats Vaitai around the edge. Wentz is forced to step up and reset before throwing an interception.

I'm going to go out on a limb and guess that Vaitai didn't do much cut blocking at TCU.

Otherwise, the Vikings didn't often attack Vaitai on Sunday, which on the surface seems curious, but was actually quite smart. They rightfully assumed Vaitai would get a lot of help, which he did, except the Eagles were often committing eligible receivers to help block nothing.

While Vaitai was certainly better to some degree against the Vikings, it's not as if the Eagles should no longer have serious concerns about the right side of their line.