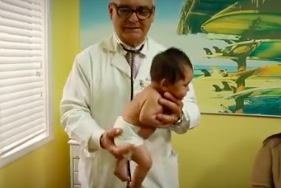 California pediatrician Dr. Robert Hamilton demonstrates how to use "The Hold" to soothe a wailing infant.

For all the love and warmth that newborns bring into the world, their seemingly uncontrollable sobbing is at times right up there with blaring car horns, lawnmowers, false alarms, and your neighbor's subwoofers among noises that drive people mad.

For one California pediatrician, however, the art of soothing babies is not a far cry from a wrestler's submission hold, according to Science of Us.

Dr. Robert Hamilton has perfected a technique he refers to as "The Hold," a tweak of conventional methods used to calm babies down during crying fits. While it's widely known that folding an infant's left and then right arm across her chest, then gently swaddling her, are effective ways to restore a sense of peace, Dr. Hamilton has recently drawn praise for identifying a specific maneuver that provides rapid results.

According to Hamilton, holding infants at a 45-degree angle as you rock them will stabilize their head and prevent an instinctive fear of falling that sets in when babies are held vertically. The theory behind rocking the babies is that it shifts their breathing from "an irregular deep, shallow rhythm to a faster, more regular one," according to 1989 report in the Canadian Medical Journal.

For children under 2-3 months old, it could work miracles -- though most newborns outgrow "The Hold" after that point.