At Penn, more than 900 women sign letter to those 'complicit in rape culture' 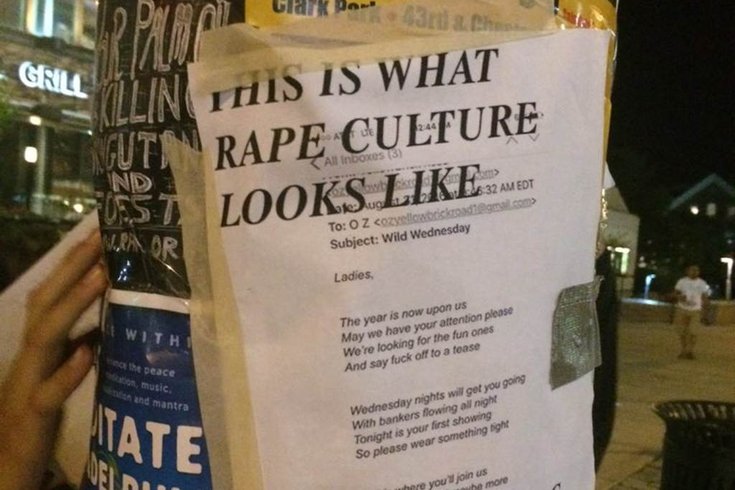 In the wake of a national uproar over the crude email distributed to some undergraduate women at the University of Pennsylvania, more than 900 members of affiliated and unaffiliated all-female groups have signed a letter in solidarity opposing those who choose to remain "complicit in rape culture" on campus.

Sent last week in the form of a lewd poem, the email invited young women to a party that openly encouraged promiscuity and scorned those who would dare "tease" their male hosts.

In the week following the August 31 email — sent by an off-campus fraternity known as OZ, according to the Daily Pennsylvanian student newspaper — a small group of students spearheaded by junior Amanda Silberling protested by posting hundreds of fliers around campus, printed with the stark words: "This is what rape culture looks like..."

Available here in its entirety, the students' statement reads in part:

This incident is not isolated or unique to the organization that sent the email – it stems from an overarching culture on college campuses across the country which targets women and brands them as inferiors, or simply objects for the male gaze. Smaller scale and interpersonal incidents have become warning tales to new freshmen, shared between sorority members to brace themselves against past and unspoken incidents of rape, sexual violence, and sexual misconduct by men at Penn, disproportionately occurring in fraternities.

Reaction to the exposed emails was swift and decisive. Pennsylvania Gov. Tom Wolf expressed his support for the organizers of the protest and called for an end to the harmful climate of sexual intimidation on college campuses. His sentiments were later repeated by Sen. Bob Casey.

Stand up like these @Penn students -- take the @ItsOnUs pledge to help keep students safe from sexual assault. -TW https://t.co/8vkql204K0

Yes, this is what the rape culture looks like, thank you @penn students for standing up cc @dailypenn https://t.co/TlMemOorwJ

Silberling, who spoke to PhillyVoice at length last week, further detailed late Sunday night the marathon efforts to compose the statement and collect hundreds of signatures over the weekend.

"It was mostly the initiative of two other students involved in the fliering, Abby McGuckin and Syra Ortiz-Blanes," Silberling said. "They approached us about the disproportionate number of women in sororities on campus affected by sexual violence on campus. We reached out to the Pan-Hellenic and multicultural sororities to begin planning a unified statement."

On Friday, a meeting was held with the leaders of 18 campus organizations to draft the letter.

"Everyone pitched in," Silberling said. "There was a lot of fine tuning that went into making it as accessible as possible. We wanted to say something that all women on campus could identify with and support."

We don't want people to be targeted. We want those who may be complicit in rape culture to try to understand and see if they can rewire the way they think about attitudes on campus.

By Saturday, the statement was sent in a Google document asking sorority leaders across campus to discuss its content with their members and collect signatures.

"We've been getting these emails for years," Ortiz-Blanes, a senior majoring in history, told PhillyVoice. "Finally we decided, let's do something about it."

The statement cites two separate longitudinal studies, conducted in 2005 and 2007, that found men in fraternities were three times more likely to commit acts of sexual violence than their non-affiliated counterparts. Women in sororities, meanwhile, were more than three times as likely to experience rape, according to a 2004 study.

Even more alarming, the statement laments, is the 2015 American Association of Universities survey that found nearly a third of female respondents at Penn said they had been sexually assaulted.

"Male chauvinism, sexist double standards, and normalized and indirect misogyny have no place at the University of Pennsylvania, or at any other university in our country," the statement declares.

"At bigger state schools, 930 people wouldn't be that big of a fraction of the sorority population," Silberling said. "But at Penn, there are about 1,300 women in sororities. To think that 900-plus individuals have signed it is incredible."

Ortiz-Blanes, who took substantial responsibility in coordinating the student groups, said the achievement is a clear reflection of the digital tools available in 2016.

"Doing this would have been insane without technology and impossible within this timeframe," she said.

Ortiz-Blanes spent the first 17 years of her life in Puerto Rico before moving to the United States to attend Penn. She's never been personally involved in Greek life, but has a number of close friends who have participated in Greek activities.

"I think the importance of this statement is that it's a collaboration that comes from diverse women all across campus. The fact that there was this space where women could get together with mutual respect — and on common ground — was really wonderful," she said. "Many of us have never met before. We just cared for each other and our respective organizations. It was a powerful thing to see. There's so much optimism, and yet it was also coming from years of pent-up frustration."

'WHAT IT MEANS TO BE A BYSTANDER'

As news of the activism at Penn spreads, Silberling hopes to counteract divisive reactions that might poison the core message of the coalition.

Not everyone is automatically receptive to such bravery, and some who feel threatened could easily revert (or resort) to minimizing the issues at stake, even brushing them aside with jokes. There are times when our culture of humorous banter crosses a line — look no further than Pennsylvania's so-called Porngate email scandal, a clinic in the war over political correctness — and what the statement at Penn shows is that this happens much more frequently than we welcome ourselves to acknowledge. 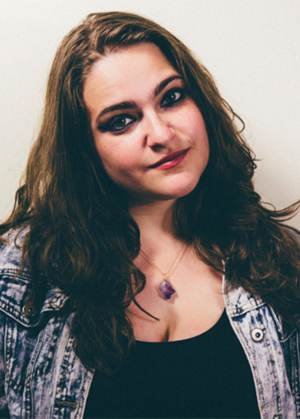 "I want to emphasize that while most of the women agree the majority of this culture is engendered by fraternities, this is an issue that pervades campuses both in and out of Greek life," Silberling said. "I've been thinking a lot about this and it really comes down to what it means to be a bystander, to just go along with what happens in communal settings.

"Good people should be speaking up if they feel uncomfortable with something they're a part of," Silberling continued. "The hardship of standing up and speaking out is a lot less severe than the hardship that comes when something really happens to someone, physically or mentally."

"It's bothersome that this fraternity didn't step forward to respond and engage in a dialogue about the dynamics that exist on campus," Ortiz-Blanes added. "We want to eradicate this culture.

"What this statement is trying to highlight is that rape culture goes beyond prevalent rates of rape and sexual assault; it also involves the normalization and trivialization of sexual violence, the objectification of women’s bodies, and the use of sexually degrading language in our everyday interactions and environment."

"Nothing, nothing, nothing is as powerful, poignant, and preventative as eloquent peer speech against the speech of other Penn peers whose speech they find abhorrent, reprehensible, and vile:  I  salute all Penn women-—indeed, all  Penn students-—who have chosen to make their voices and choices heard so clearly and compellingly!"

'THIS IS A UNIVERSAL CAUSE'

In the past year, the American public has seen new light shed on campus rape and harassment — both reported and unreported — and also seen the unraveling of a bombshell story published by Rolling Stone.

In reality, it is a global issue, Silberling said, acknowledging it cannot be conveyed and corrected with numbers alone.

"It's extremely nuanced," Silberling said. "When we had our meeting with people from all different sororities, we really discussed the language we wanted to use in the letter. We never used the names of specific groups or targeted anyone in particular. We don't want people to be targeted. We want those who may be complicit in rape culture to try to understand it and see if they can rewire the way they think about attitudes on campus. We all want to approach this as a way to help educate people rather than single them out."

It's not easy an easy stance to take in the face of emails such as the one exposed last week, but it's the mature thing to do, and may be the only way to foster a dialogue that remains constructive, Silberling said.

"It takes a lot of self-restraint not to be impulsive and angry in what we say to the public, because it can really affect a lot of people. This has been really overwhelming," she said, describing the attention as surreal. "I never saw this coming. I've never had to put this much thought into what I say to make sure that it brings us together and unifies us instead of alienating people and creating factions.

"This is a universal cause," she added. "I don't think it's that difficult to emphasize that this is about trying to keep people safe."