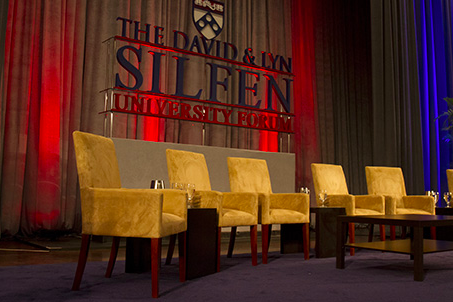 An ambassador for Penn Medicine who had been scheduled to join a cancer forum led by former Vice President Joe Biden has backed out of the sold out event after reports uncovered allegations of discrimination against an Iraqi-American family at an ice rink she owns in Florida.

Loretta "Lori" Alf, a blood cancer survivor who underwent successful immunotherapy treatment at Penn, was supposed to be a featured panelist at a forum next Monday, marking Biden's first official appearance at the university since accepting a dual role in Philadelphia and Washington, D.C.

The panel, "A Formidable Foe: Cancer in the 21st Century," will focus on the progress and challenges of cancer research and the role of universities in advancing novel treatment methods. It's an extension of Biden's efforts in the White House to spearhead a "Cancer Moonshot" that will change the world's approach to understanding and treating cancer in the decades to come.

On Monday, The Daily Pennsylvania published an article detailing a discrimination lawsuit against Alf stemming from a December 2012 incident at Palm Beach Ice Works, where she allegedly banned a young Iraqi-American skater who had been training there for several months before sharing her desire to eventually skate for the Iraqi national team.

Alf also serves on the board of a defense contractor founded by her husband that conducts business in Iraq. According to the lawsuit, filed by the skater's mother in Palm Beach County in 2015, Alf banned Hyaat Aldahwi and her family in part over fears that the child's presence at her rink might create a conflict of interest.

The suit also charges that Alf inflicted emotional distress on Aldahwi after referring to the family as "towel heads" and "Iraqi f--king c--ts, allegedly declaring "there won’t ever be an Iraqi skater at the Olympics — over my dead body."

Part of the Aldawhis' case rests on the notion that the alleged discrimination and emotional distress occurred on the basis of “ancestry/national origin/ethnicity discrimination,” a premise Alf's attorney denies is sufficiently proven in the lawsuit. The attorney has also reportedly denied that Alf ever uttered the insults of which she stands accused.

By Wednesday evening, The Daily Pennsylvanian reported that Alf's name had been removed from the list of panelists for the forum. A university spokesperson told the student-run newspaper that Alf chose to back out over concerns that recent coverage of the lawsuit, including a critical editorial, would detract from the purpose of the event.