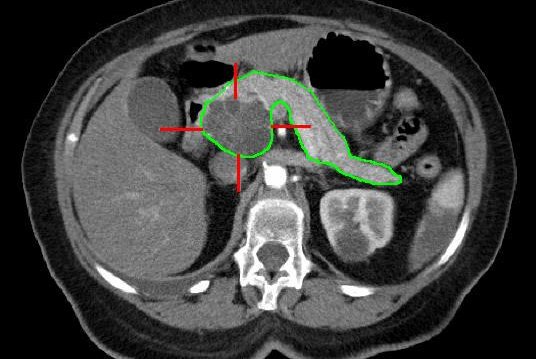 A CT image of pancreatic cancer.

University of Pennsylvania-led researchers say they found a promising development in ongoing efforts to combat one of the deadliest forms of cancer.

Because pancreatic tumor cells hide deep inside the body, the cancer typically goes unnoticed until late in its development. As a result, only one in 20 people will survive pancreatic cancer within five years of diagnosis, and the disease has a typical survival time of less than six months, researchers said.

But a recent study shows a potential treatment method that could slow the cancer's onset and progression, as well as reduce the rate at which it spreads.

Deleted the gene encoding of FAP in mice helped the animals live longer and reduced spreading, researchers said in a press release.

"We thought that by targeting this protein we would see a big change in the primary tumor, and, while we do see a delay, the big change was in the metastasis,” said Ellen Puré, the study’s senior author and chair of the Department of Biomedical Sciences in Penn’s School of Veterinary Medicine. “It looks like this protein might be a druggable target, so we’re hoping that with some additional follow-up work, it’s something that we’ll see go into patients.”

The study, published in the Journal of Clinical Investigation Insight, shows that deleting FAP delayed the onset of the disease by five weeks and helped the animals live 36 days longer. That result indicates that FAP accelerates the cancer's progression, the study states.

But the impact the experiment had on reducing the spreading of the cancer was the more significant finding, Puré said.

"This is the first time we’ve shown that FAP is important for promoting metastasis,” Puré said. “By targeting FAP with a drug, we may be able to slow down the spread of the cancer by treating distal tissues that you don’t even realize are getting ready to accept tumor cells, a phenomenon referred to as treating premetastatic niches. That is the hope."

Moving forward, the group plans to hone in on what aspect of FAP helps cancers progress.

"Inhibitors to its protein-cleaving activity already exist, so, if that is found to be responsible for its role in driving cancer, the path to a human therapy may be alluringly in reach," the release stated.

Grant money from the National Institutes of Health, Academia Sinica and Taiwan's Ministry of Space and Technology supported the research, Penn stated.

The study can be found here.