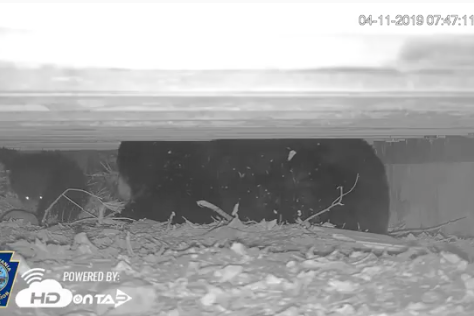 Pictured above is a night vision shot of the Pennsylvania Game Commission's bear cam from 2019, when a mother and her cub prepared to leave the den after a winter of hibernation. The camera, operated by HDOnTap, has returned to the same location in 2021.

The Pennsylvania Game Commission has brought back a popular bear den livestream from a cabin in Monroe County, expanding on the state's existing eagle, snow goose and elk cams.

The livestreams are a collaborative effort between the Game Commission, HDOnTap and Comcast Business, giving residents an inside look at wildlife in the state. HDonTap has dozens of other livestreams at locations across the United States, as well.

The bear den cam first appeared in 2019, featuring a mother bear and her cub during hibernation season.

"HDOnTap is excited to partner with the Pennsylvania Game Commission for this cam's resurgence,” said HDonTap co-founder and CEO Tim Sears. “We were unsure if the opportunity would arise again for the live bear den cam. Watching the female and her cub was such a joy in 2019, it quickly became one of our staff's favorite cams to watch."

The den featured in this year's cam is the same one from 2019, located beneath a cabin deck in Monroe County.

"We cannot confirm it is the same female bear, that would be considered unusual, but this one also has ear tags," the Game Commission said. "We've seen TWO little noses so far."

Pennsylvania’s black bears usually are born in January. They begin walking in about eight weeks and leave the den at about three months old. During the 2019 run of the black bear livestream, the bears left the den on April 11.

The Game Commission provides insights and viewing tips for those who check in on the sow and her cub. If you hear the sound of a car ignition that won't turn over, that could be the sound of a nursing or purring cub. It's also possible you'll hear the cub crying.

"Sows communicate to their cubs with low grunts, huffs and mumbles," the Game Commission said. "You may hear water dripping from snow melt, birds chirping and the occasional passing of the human residents."

People who live nearby the den are not considered to be threatened by the bears, who are likewise not disturbed by human activity in their midst. Disturbing the den could result in cub abandonment.

The HDOnTap camera includes both audio and night vision. It's controlled remotely and has the ability to pan, tilt and zoom.

When young cubs start to mature in the spring, mother bears will usually take them to the surrounding woods, where they'll learn how to climb and search for wood.

Pennsylvania's black bear population has declined over the last year, falling from about 20,000 in 2019 to about 16,200 this year, according to the Game Commission. That's still considered a healthy and acceptable population. Interest in bear hunting also has increased considerably in Pennsylvania over the last several years.

In the video below, you can watch the 2019 black bear and her cub leave the den for the spring.