Noisy Brood X cicadas may return to the Philly region this spring, after 17 years of hibernation 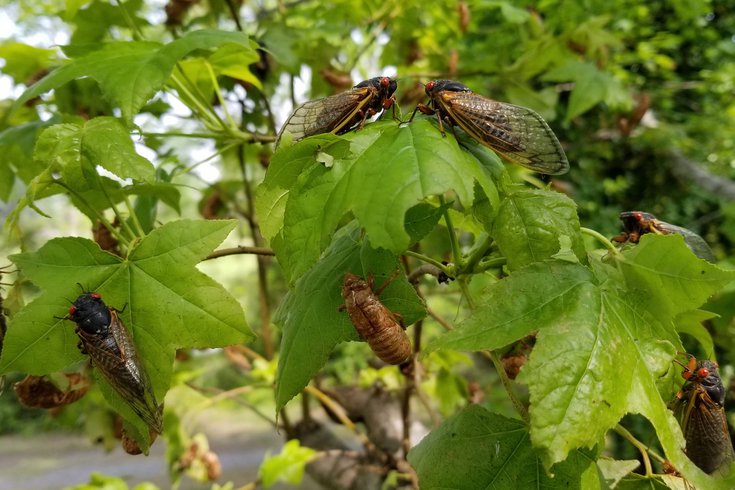 The Philly region will have a new pest to deal with this spring, when Brood X cicadas arrive in the area, crawling up from beneath the forest floor where they've hibernating for the last 17 years.

As if lanternflies weren't enough already, people living in the Philadelphia region will have a new flying pest to deal with this spring.

Brood X, or Brood 10, cicadas are expected to arrive in the area around the end of May into June, crawling up from beneath the forest floor where they've hibernating for the last 17 years, subsisting on tree sap.

Once they arrive, they'll be above ground for five to six weeks. They'll mate, lay new eggs and then die, and their newly hatched offspring will eventually crawl back underground for another 17 year period.

The cicadas are not dangerous to humans, but they're extremely noisy. Compared to the average cicadas – which makes an appearance every summer – an individual Brood X cicada can emit a chirp as loud as 90 decibels, the equivalent of a lawnmower.

The noises are the male cicadas mating calls and they begin soon after the bugs reemerge the ground.

"The end of May through June, it can get pretty loud," Michigan State University entomologist Howard Russell told USA Today.

The 2021 arrival of this brood may be one of the most prolific and widespread appearances of the cicadas, according to NBC News. With chances for billions or even trillions of insects to show up in each region, it's easy to understand why the species is also referred to as "The Great Eastern Brood."

The bugs haven't been seen in the Philly area since 2004, which was Brood X's the last mass appearance. But the city could be spared this mass arrival in 2021 because the insects may not favor Philadelphia's urban landscape as a place to land, Jared Ali, an assistant professor of entomology at Penn State, told PhillyMag.

"The concrete jungle isn’t the best place for them," Ali said, citing evidence that the cicadas like to lay their eggs in trees and predominantly green spaces.

Brood X cicadas likely will start to scratch their way from the earth after a warm rain, when the soil covering the bugs reaches at least 64 degrees.

The cicadas have black bodies, red eyes and can grow to be two inches long. This makes them easier to tell apart from normal cicadas, which are typically green in color.

Unlike lanternflies, the bugs aren't as invasive. Brood X cicadas are not likely to harm your plants, unless you have young fruit trees planted. So, if you see one of the creatures, don't worry about squashing them on sight.

You can even eat the insects, though it doesn't seem like many people would enjoy the result. It's been said that cicadas taste like canned or soft asparagus.