Jason Moorehead is demanding the Allentown School District issue a public apology, saying his reputation has been tarnished 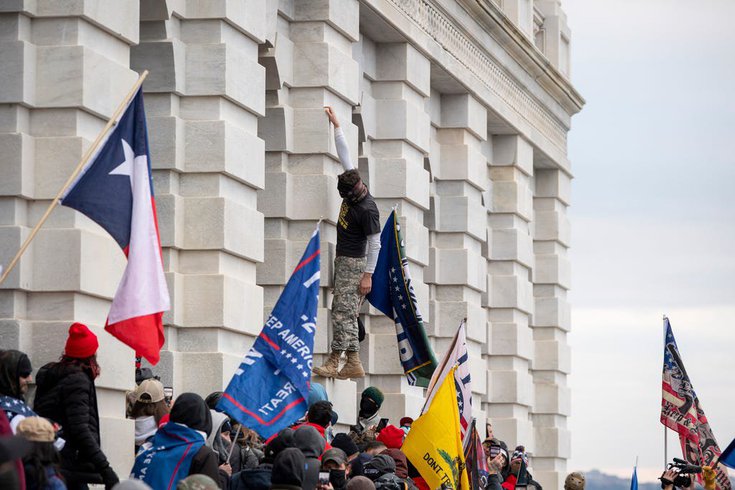 Jason Moorehead, an Allentown School District teacher who was suspended following the U.S. Capitol riot, says his reputation has been damaged by the district.

A teacher who was suspended by the Allentown School District following the the U.S. Capitol riot is trying to restore his reputation.

Jason Moorehead, 44, said he attended the "Save the Steal" rally in Washington on Jan. 6, but that he never came within a mile of the Capitol building, the Morning Call reported. Moorehead, who was put on paid suspension, wants the district to issue a public apology clearing his name and get him back in the classroom.

Moorehead has worked for the district for 17 years, but he said the notoriety has cost him the respect and trust of his community. He has had to delete his social media accounts and fears for his safety, noting his address and phone number have been posted online.

On the day after the riot, Superintendent Thomas Parker posted a letter on the district's website stating a teacher had been suspended and was under investigation for his role in the insurrection. Moorehead was not named, nor was the school where he worked. But the letter emphasized the community's response to his social media postings from Washington.

The district told the Associated Press that those posts prompted its investigation — not just Moorehead's presence in Washington.

One post in particular — a meme of a bare-chested Arizona man clad in a furry, horned hat who climbed the Senate dais, which Moorehead captioned "Wrong on so many levels, but hilarious none the less," — pushed several community members to call on the district to suspend the teacher.

Moorehead's attorney, Francis Malofiy, has demanded the district make a public statement clearing his name. He told the Morning Call that it seems "inevitable," that he will file a lawsuit, claiming Moorehead is being penalized for his political beliefs.

"The district is fully within its right, as well as its obligation, to investigate the conduct of one of its teachers who might be involved in conduct that could interfere with his role as an effective teacher," the letter said, according to the AP.

Freund told the AP that the district's investigation is set to wrap up soon. It will provide a recommendation about Moorehead's teaching status.

Moorehead is among dozens of people who have been suspended or removed from their jobs because of their alleged involvement in the Capitol riot.

"I definitely have some conservative values and beliefs, but they have never taken part in what I do in the classroom," Moorehead told CNN. "I’ve always encouraged my kids to be critical thinkers and to form their own opinion, one that they can be proud to have."