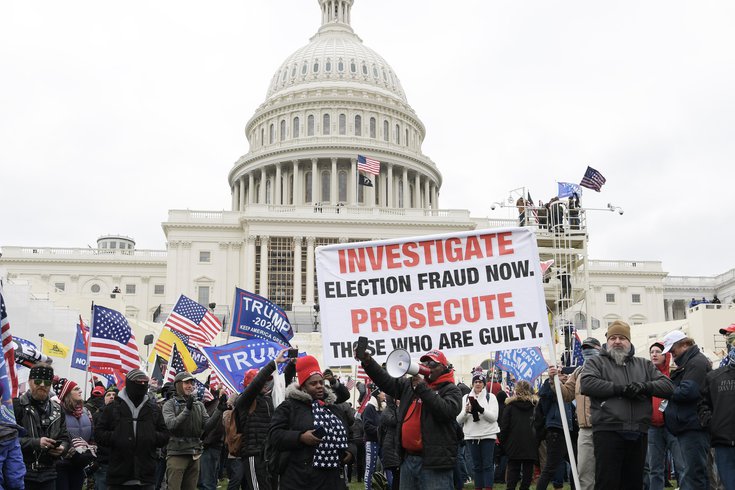 An Allentown School District teacher was temporarily removed from his duties while the district investigates his role in the riots at the U.S. Capitol building Wednesday. The man's name has not been disclosed.

The Allentown School District will conduct a formal investigation into the role that one of its teachers played in the U.S. Capitol riot.

The teacher has been relieved of his duties until the investigation plays out, Superintendent Thomas Parker wrote in a letter Thursday evening. The teacher was not identified, nor was the school where he works.

"We understand that many members of our community are upset by the image," the letter said. "At the same time, the district has an obligation to respect the First Amendment rights of our staff and students."

The chaos in Washington D.C. added to the "confusion and uncertainty" that students are facing during the pandemic, Parker wrote. He urged staffers to "think carefully" about the information they share online, noting it could affect students and community members.

"While we all have the right to express ourselves, it is important to do so respectfully," Parker wrote. "We ask the same of our students and families."

A mob of pro-Trump extremists stormed the Capitol Wednesday in an attempt to disrupt Congress from certifying the Electoral College results. They were emboldened by President Donald Trump, who urged them to head to Capitol during a rally near the White House.

District officials have not disclosed whether the suspended teacher was among those who breached the Capitol building.

Parker and School Board President Sara Brace declined to provide additional details or identify the teacher, citing it as a personnel matter, The Allentown Morning Call reported.

The Allentown School District has 22 schools and more than 16,000 students enrolled, according to the Future Ready PA Index.

Other people reportedly have lost their jobs because of their involvement in the riot.

An employee at Navistar Direct Marketing, a printing company based in Maryland, was fired Thursday after a picture of him inside the Capitol wearing pro-Trump paraphernalia and his work badge went viral, the Washington Post reported.

Paul Davis, a Dallas-area lawyer, was fired from Goosehead Insurance after a Twitter user brought Davis's Instagram posts at the Capitol to light.

Libby Andrews, a Chicago-based real estate agent, was fired after her social media posts about storming the Capitol were identified by several people and sent to her employer. Andrews told the Chicago Tribune that she didn't know illegal actions were taking place.

"I had no idea people were breaking in and that destruction was happening," Andrews said.

Seventy people had been arrested as of Thursday night, including 13 Pennsylvania residents. Ten of them have been charged with curfew violations; the three others face charges of unlawful entry, PennLive reported. They could face penalties ranging from fines to prison time.

The FBI, looking to identify others involved in the riots, has set up a tips webpage.

Social media footage of the chaos showed the pro-Trump mob toppling barricades, scaling the building and smashing windows. The intrusion prompted lawmakers and Vice President Mike Pence to flee for safety. An armed standoff played out in front of the House chamber.

Capitol Police officer Brian Sicknick, and Ashli Babbit, a Trump supporter from San Diego, died from injuries sustained during the riot, CNN reported. Three others, including Benjamin Philips, 50, of Ringtown Pennsylvania, died of apparent medical emergencies during the chaos.