Andrei Doroshin claims the shots were about to expire 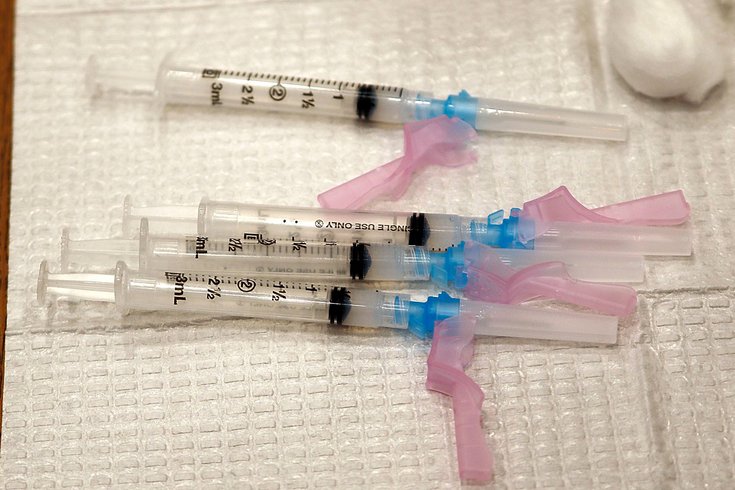 Andrei Doroshin, the CEO of Philly Fighting COVID, says he gave coronavirus vaccines to his friends because they were set to expire. Above, syringes filled with COVID-19 vaccines at a site in Ohio.

Andrei Doroshin, the 22-year-old CEO of Philly Fighting COVID, has broken his silence amid the fallout from his organization's severed partnership with the city's health department.

The graduate student and entrepreneur admitted to administering COVID-19 vaccines to four of his friends during an interview aired Thursday on NBC's "Today."

But Doroshin, who is not medically qualified to administer vaccines, said the doses he took home were about to expire and he did not want them to go to waste. He said they called "everybody we knew" in search of potential recipients who were a high-risk of severe COVID-19.

"I standby that decision," Doroshin said. "I understand that I made that mistake. That is my mistake to carry for the rest of my life. But it is not the mistake of the organization."

On Wednesday, health officials said an audit did not find any evidence that vaccines were "wasted, stolen or otherwise misused," NBC10 reported.

But the city has fallen under scrutiny for entrusting the nine-month-old startup company with a substantial portion of its vaccine rollout. Several city council members are calling for hearings investigating the matter.

Doroshin told "Today" that he has received death threats since the city dissolved the partnership.

The city of Philadelphia has cut ties with a group run by a young graduate student that was tapped to run the city’s first mass COVID-19 vaccination clinic. The move comes after a series of reports uncovered troubling allegations about the group. @stephgosk reports. pic.twitter.com/StGQa4UVsb

Health officials said they made the decision because Philly Fighting COVID had switched from nonprofit to for-profit status without informing them. It also had updated its privacy policy to allow it to sell information collected through its vaccine pre-registration website. The city has since launched its own website where residents can register for vaccines.

He also said the organization pivoted to for-profit status because it wanted to start billing insurance companies, though it received the vaccines for free. He said it became too expensive to run the vaccination clinics, saying the donations the organization received were not enough to cover its costs.

Health Commissioner Dr. Thomas Farley has said the city is developing plans to move future COVID-19 vaccine allocations to other providers and schedule new clinics to ensure that people who were vaccinated through Philly Fighting COVID can get their second doses.

The health department has the contact information of everyone who received their first doses through Philly Fighting COVID and is expected to contact them to set up appointments for their followup shots.

Philadelphia is in Phase 1B of its COVID-19 vaccination plan, which includes select groups of essential workers, seniors over age 75 and people with certain underlying health conditions. Health care workers, as well as long-term care facility residents and staff, were covered under Phase 1A.