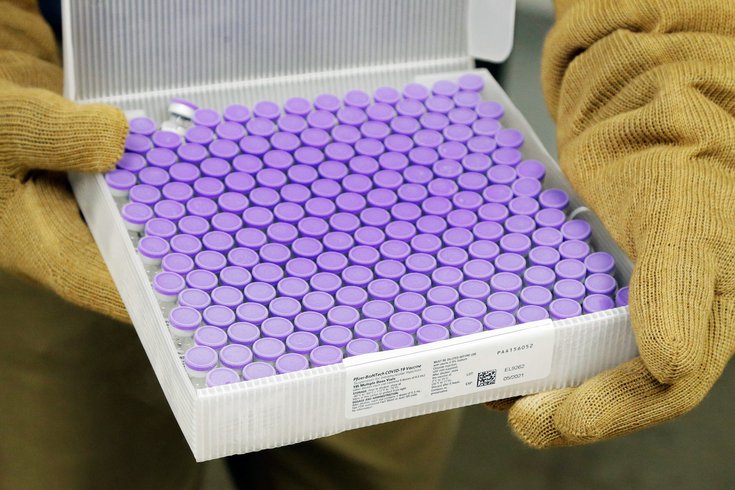 The Philadelphia Department of Public Health says vaccination efforts will not be impeded by the termination of its agreement with Philly Fighting COVID. Above, a tray of Pfizer's COVID-19 vaccines.

Philadelphia officials pledged Tuesday not to get sidetracked from administering COVID-19 vaccines in the wake of a messy separation from Philly Fighting COVID, a partner organization whose questionable handling of city resources and private information led to to the termination of its provider agreement this week.

The city's break with Philly Fighting COVID came as reporting surfaced that the group, led by 22-year-old entrepreneur Andrei Doroshin, had a established a for-profit arm, updated its terms of service to allow for the sale of personal data, and discontinued COVID-19 testing services that had been run in partnership with the city for months.

"I'm sure it's very disturbing for people, because so many people want the vaccine right now, and we have so few doses," Health Commissioner Dr. Thomas Farley said. "Anything that looks like a glitch in the distribution process is going to be even more frustrating for people. I understand that. It will not, overall, slow down our vaccination process."

Farley said that the city's provider agreement with Philly Fighting COVID was based on the group's previous success in administering COVID-19 testing. The opportunity was given to them because of a sudden and urgent need to distribute the city's limited vaccine supply and quickly reach unaffiliated health care workers who were eligible to receive the vaccine.

For the sole purpose of getting these groups vaccinated, Farley said the clinics were a success.

Ultimately, a combination of factors led to the city cutting ties with Philly Fighting COVID — not just the group's change to for-profit status. City officials said they only learned of that change after the partnership was established.

The mass vaccination clinics held in January by Philly Fighting COVID provided first doses of the COVID-19 vaccine to several thousand people at the Pennsylvania Convention Center. Most of them were health care workers covered in the city's Phase 1A priority list.

Beyond those who received the vaccine, thousands of others interested in getting vaccinated gave their personal information to Philly Fighting COVID. They used a pre-registration form that was made available to the public before the city's official vaccine sign-up form went online last week.

Farley addressed pointed criticism about the city's arrangements with the group, offering assurance that everyone who received a first dose of the vaccine will receive the appropriate second dose on time.

"We will assure that everybody who got their first dose with Philly Fighting COVID gets their second dose," Farley said. "We will run a clinic or multiple clinics to match the times that they're due for their second dose. We'll either do that by ourselves at the health department — we have ways of doing that — or run that with another partner organization."

The health department already has a database containing the names of people vaccinated by Philly Fighting COVID, when they received their first doses, which vaccines they received and personal contact information needed to schedule their second doses.

"We know to communicate with them about exactly when the second dose opportunity is," Farley said.

The health commissioner did not provide a timeline for selecting a new vaccine partner organization. The city's potential options include the health department running the operation on its own — using volunteer or contract nurses and other staff — or partnering with a local hospital that is already running its own mass vaccination clinics.

Despite the worrisome privacy policy adopted by Philly Fighting COVID, Farley said the organization claims it has not sold any personal information and will not do so moving forward. The city's law department has been consulted to address the potential fallout in the event personal information is compromised.

The health department has not been able to confirm further allegations that Philly Fighting COVID may have redirected unused vaccine supplies. The city will review any available evidence that this took place.

"I have questions about the methods used by Philly Fighting COVID in collecting personal data from people signing up for vaccine information, and what this company plans to do or might have already done with that personal data, as well as WHYY's reporting today that suggests the company's founder might have taken vaccines meant for public distribution into his personal possession," Krasner said.

Anyone with information is encouraged to contact the District Attorney's Special Investigations Unit by email at DAO_SIU@phila.gov or by phone at (215) 686-9608.

Philadelphia is now in Phase 1B of its vaccination plan, a large group that encompasses essential workers, residents over the age of 75 and people with high-risk medical conditions. Getting through this group is expected to take months based on the current vaccine supply.

To date, the city has received 132,000 doses of the COVID-19 vaccines manufactured by Moderna and Pfizer. Each vaccine requires two doses for maximum effectiveness demonstrated in clinical trials.

The city has visited 45 of 47 long-term care facilities to offer the vaccine to residents and staff through a partnership with local pharmacies. The remaining two are scheduled to be visited in the near future. Once those visits are completed, pharmacies will be transitioned to providing the vaccine to the public.

Philadelphia continues to receive approximately 20,000 COVID-19 vaccine doses per week. That quantity is expected to remain steady through at least the end of February.

The health department announced 568 new confirmed COVID-19 cases Tuesday, bringing the citywide total to 104,484 since the start of the pandemic.

"The decreasing cases we're seeing is in the context of pretty substantial declines all around us," Farley said. "Pennsylvania, New Jersey and the United States as a whole are all seeing about a 30% decline in the past two weeks. But still, our case counts are very high."

The health department also reported 25 new fatalities from COVID-19, raising the city's death toll to 2,821. Deaths in the city have been declining since a peak during the second half of December.

Farley acknowledged that the vaccination process is long and difficult for hundreds of thousands of city residents who will have to wait months for an opportunity.

"The waiting and the uncertainty, not knowing when you'll be able to get the vaccine, is just making things seem so much worse for everyone right now. I understand that," Farley said. "I understand that this is really tough for people. I wish I could fix that. I wish I could everyone a vaccine today, or even give a schedule so that everyone knows when he or she will get it."