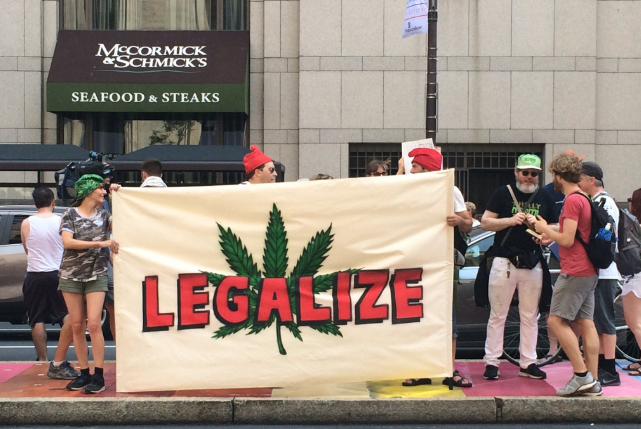 Advocates supporting the legalization of marijuana hold a sign supporting their cause near Philadelphia City Hall on Monday, July 25, 2016.

In late January, Pennsylvania Gov. Tom Wolf turned the conversation about legal marijuana over to his constituents. He sent Lt. Gov. John Fetterman on a listening tour through the state’s 67 counties, and his office opened up an online form where Pennsylvania residents could tell the governor what they think about legalizing adult-use, recreational marijuana.

Turns out, plenty of Pennsylvanians had opinions for the governor.

Wolf’s office said in a release Tuesday that more than 21,000 people have sent the governor feedback through the online form in the 47 days since the form was made available.

That’s nearly 447 messages about weed each day, for six and a half weeks.

Fetterman’s most recent listening session was held in Oil City, located in Venango County in northwestern Pennsylvania. More than 150 people turned out to discuss the pros and cons of legalization, from a city of roughly 10,000:

(If the same percentage of Philadelphia showed up — 1.5 percent, equivalent to 23,700 residents — the crowd would fill the Wells Fargo Center to capacity, with 4,200 attendants left over.)

The governor’s correspondence office noted, unsurprisingly, that no other topic had received this kind of response since Wolf took office in 2015.

Wolf called the response to the listening tours and online form “tremendous”.

"I'm pleased that Pennsylvanians are taking the time to let us know their thoughts on the topic of legalizing adult-use marijuana," Wolf said. "It's my hope that this level of interaction becomes the norm on issues important to Pennsylvanians. It's how we can best develop policy and programs — by listening to our everyone's perspectives."

Wolf's announcement comes on the same day that New Jersey Gov. Phil Murphy announced lawmakers had reached a deal on a bill to legalize recreational marijuana use in New Jersey.