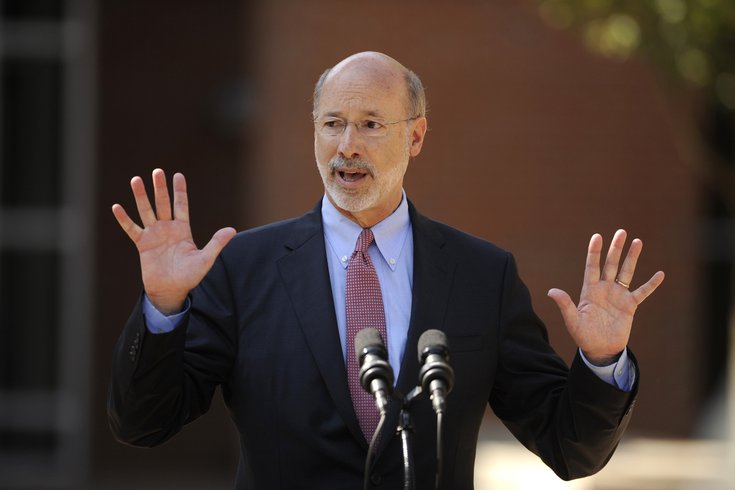 Pennsylvania Gov. Tom Wolf vetoed Senate Bill 48, which would have eliminated straight-ticket voting in the state and committed $90 million to help replace voting machines, over concerns that the bill would 'weaken' the security of the state's voting systems.

Pennsylvania Gov. Tom Wolf vetoed Senate Bill 48 on Friday over concerns it would "weaken" the security of the state's voting systems.

The bill would have eliminated straight-party ticket voting in elections and provided $90 million from the state to help counties buy new voting machines ahead of the 2020 elections.

“Senate Bill 48 makes changes to our elections that I do not believe strike the right balance to improve access to voters or security," Wolf said in a statement Friday. "The bill weakens the ability of the commonwealth and counties to quickly respond to security needs of voting systems in the future, creating unnecessary bureaucracy and potentially harmful delays."

In a statement to the Pennsylvania Senate, Wolf said he believes removing the straight-party ticket voting option could lead to voter confusion and long lines at polls on Election Day, leading to decreased voter participation.

Some critics called it a form of "voter suppression" because of the potential longer lines.

Wolf said Friday he remains "committed" to voting machine funding, but didn't provide specifics on how he plans to achieve that goal.

The Pennsylvania House Republican Caucus released this statement on Wolf's decision to veto the bill:

Pennsylvania's election system is currently in a race against the clock to update its voting machines before the 2020 election.

In April 2018, Pennsylvania Secretary of State Robert Torres directed all Pennsylvania counties to have “voter-verifiable paper-record voting systems” by the 2020 primaries.

In December, Montgomery County set aside nearly $6 million to upgrade its voting machines to voter-marked paper balloting, signing a contract with Dominion Voting Systems of Denver, Colorado. The system – voters use a pen to fill out paper ballots, then have opportunities to check their ballots' accuracy before having their votes scanned – debuted for the May primary.

And this February, Philadelphia's City Commissioners voted in favor of new voting machine systems which feature bar code readers and printed ballots. The machines were not recommended by a Blue Ribbon Commission, however, because the QR codes the machines produce for tallying votes aren't human-readable.