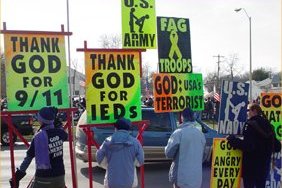 Protesters from the Westboro Baptist Church

A Pennsylvania lawmaker hopes to protect grieving families by banning protests at funerals, with some exceptions to preserve free speech rights.

State Sen. Patrick J. Stefano, R-Fayette, wants his legislation to allow for the "peaceful and private mourning of the deceased."

"During a funeral, which is often the height of the grieving period for family, is no time for political stunts or messaging such as protesting," Stefano wrote in a co-sponsorship memo for the potential bill. "I believe that this time period should be respected, and that the rights of families to privately mourn in peace should not be intruded on."

The most infamous orchestrators of funeral protests are members of the Westboro Baptist Church, who've consistently made national headlines for demonstrating at services for military members where they spew homophobic and hateful rhetoric.

After a 2011 Supreme Court ruling deemed the protests protected under the First Amendment, Congress passed legislation limiting the demonstrations, requiring demonstrators at military funerals to stay 300 feet away two hours before the service begins and two hours after it ends. The law hasn't stopped the group's protests.

Stefano's bill would enforce more stringent regulations in Pennsylvania, as it would apply to all funerals. It would ban demonstrations during services altogether, but would allow for them to take place one hour before and one hour after the funeral.

"It is my aspiration to introduce legislation which will protect the right to mourn in peace during funeral proceedings, while minimizing the suppression of the right to protest," Stefano wrote.