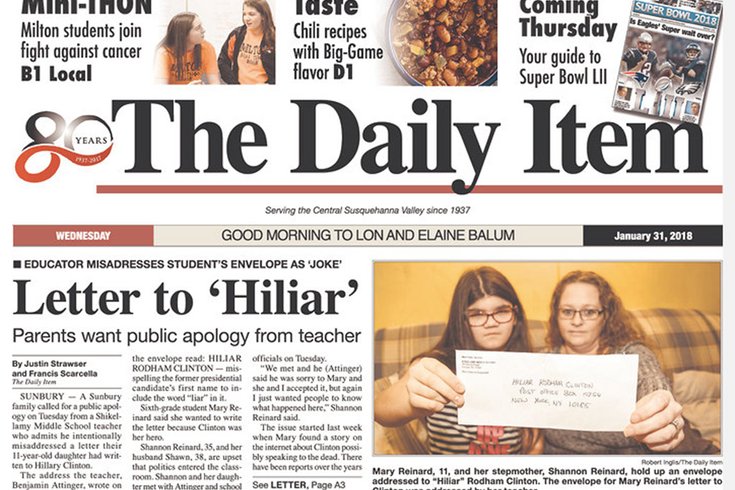 Reported by The Daily Item of Sunbury, Pennsylvania, the story ran atop Wednesday's front page.

That's how a Pennsylvania teacher helped a student address a letter to the former presidential candidate.

Now Benjamin Attinger, a teacher at Shikellamy Middle School in Sunbury, has apologized for his attempt at humor. He admitted intentionally misspelling Clinton's name to emphasize the word "liar" in a sixth-grade student's letter, the The Daily Item newspaper of Sunbury reported.

Mary Reinard, 11, who lives in Sunbury, told newspaper that she wanted to write to Clinton because she was her hero.

In a voicemail, Attinger admitted that "it was kind of a joke."

Mary's stepmother, Shannon Reinard, 35, is angered that politics crept into her daughter's classroom. She and her daughter met with the teacher and officials at the school on Tuesday, the newspaper reported.

Shannon Reinard told the Daily Item that Attinger, a 2012 graduate of Bloomsburg University, has apologized to Mary.

For the full story, check out the Daily Item's website.