Neither of those was were most popular in New Jersey either

Can you guess what was Pennsylvania's most streamed show on Netflix this year? It might not be what you expected.

HighSpeedInternet.com, a website that helps customers find and review internet providers, cross-referenced the top 75 shows on Netflix with Google Trends since the streaming service doesn't release the data itself and came up with a state-by-state map released Tuesday.

So what was Pennsylvania's? It wasn't the wildly popular "Stranger Things," "Making a Murderer" or even "Orange is the New Black."

This year, Pennsylvanians were most addicted to "Shameless," a comedy-drama that originally airs on Showtime about a dysfunctional family living in Chicago.

New Jersey was most obsessed with "Narcos" while Delaware also sided with "Shameless."

Pennsylvania's choice fell in line with much of the Northeast, which favored shows like "Nurse Jackie," "New Girl" and "Crazy Ex-Girlfriend."

The South streamed shows like "Scandal" and "Bloodline" while the West Coast preferred "Crazy Ex-Girlfriend" and "Portlandia." The Midwest favored "Orange is the New Black" and "Narcos."

Check out HighSpeedInternet's full map below or see the complete results here. 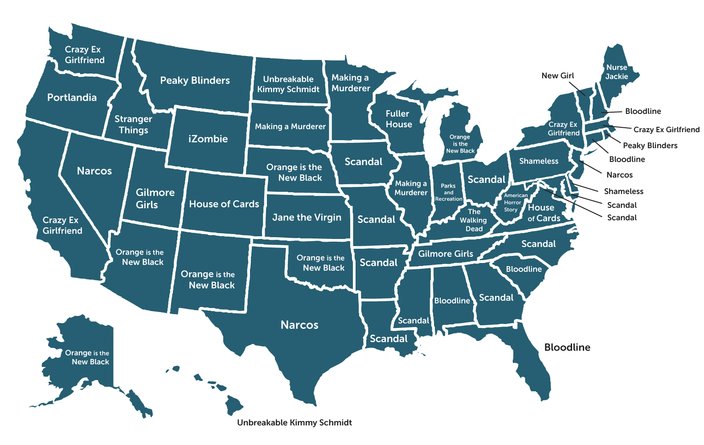