This is Pfff! — Philly’s strangest music and movement festival

A curious collection of improvisers assembles this weekend 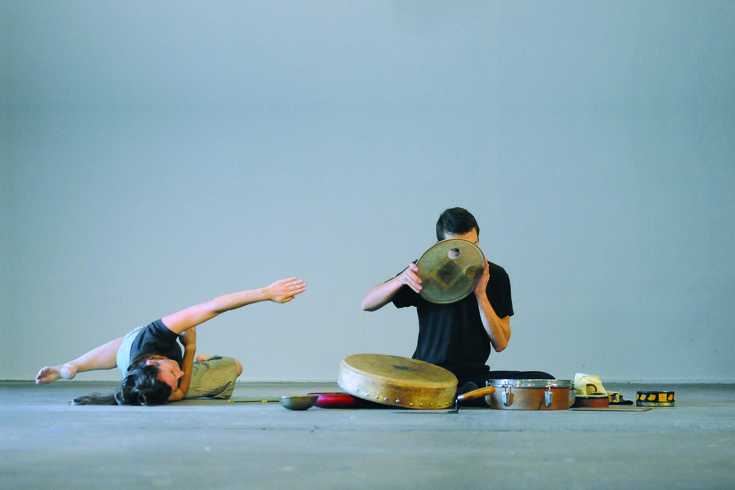 If an organization called the “Impermanent Society” is going to establish an annual festival, it’s only fitting that the name should change from year to year.

Such is the case for the Pfff! 2016 Philadelphia Free Form Festival, the second incarnation of an event that kicked off last year as the NowHere Festival of Free Improvisation in Sound and Movement. The new name, with its suggestion of air escaping from a balloon or of something disappearing in a puff of smoke, seems to capture the very sound of impermanence.

“Yeah, let’s go with that,” was the shrugged agreement of Society co-founder Flandrew Fleisenberg, who went on to suggest a more practical basis for the name. “A room full of artists agreed on it. It’s taken on a lot of meaning and it’s hard to explain, but everyone feels really good about it.”

If Pfff! ultimately smacks more of hard-won consensus than of mission statement, the festival itself has a clear purpose: to promote free improvisation, particular in the form of sound and movement, in Philadelphia. A week of discussions, workshops and master classes will culminate this weekend with three days of performances at Icebox Project Space featuring improvising artists from Philly and beyond.

“The goal is to build up this art form in the city and to support established and young artists alike,” Fleisenberg explained. “We all share a passion for the same art form but all have different aesthetics and approaches towards it, and that multiplicity of voice is pretty cool. We wanted to see if we could work together.”

This weekend’s performances will include more than 25 improvisers from across the country, about half of them from the Philly region, in various groupings. This year the Society looked beyond their own personal contacts, widening the curation with an open call that introduced them to new collaborators.

Leading up to the public performances, the festival will host a variety of activities throughout the week. Veteran dancer Karen Nelson is leading her FormSmash improv workshops nightly at Mascher Space Coop, and dancer Asimina Chremos is moderating a panel discussion on Friday afternoon exploring the subject of freedom in performance. Festival artists are also working with students from Moffet Elementary and Girls Rock Philly in youth classes, giving local kids an early outlet for their improvisational impulses. As Fleisenberg says, “That playful, unabandoned approach to making decisions and being in the moment – kids have that in spades, and tapping into that can be really fruitful.”

Taking “Sound and Movement” out of the festival name also allows for the possibility of expanding beyond those two disciplines, which Fleisenberg hopes to do in the future. In his own performance — he’s a percussionist who works with a variety of objects in intended and unintended ways — he already strives to blur those stylistic lines. “In order to sound, I move, and whenever somebody moves, they sound. I don’t view it so much as a binary. I certainly am not a dancer, but I’m able to interact with and be inspired by a nonsounder’s movement, the gestures that they make in space or the speed at which they’re moving. We’re working in the same art form; it’s just the tools that are varied.”