The month-long festivities culminate in an awards ceremony held at Xfinity Live! on Sunday, Feb. 5 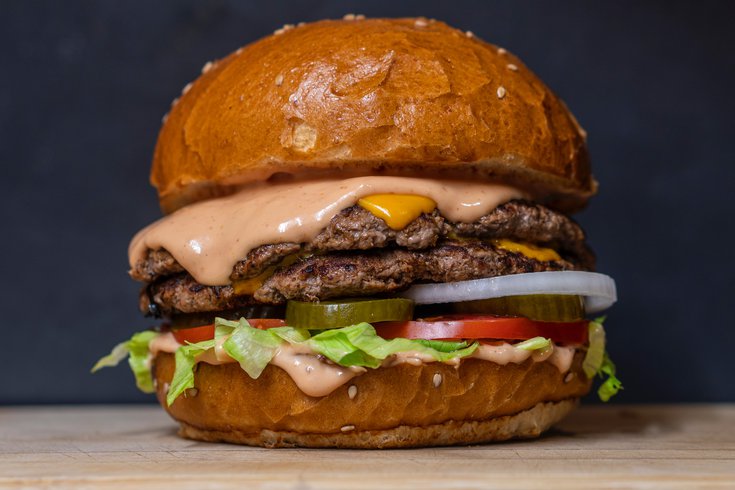 Philadelphia Burger Crawl, rescheduled from October due to the Phillies' World Series run, is happening throughout the month of January. Ticket holders can visit over 30 participating restaurants in the region and vote for their favorites.

Philadelphia Burger Brawl, a competition crowning the best burger in the city, was set to happen for the first time in two years this fall, before the Phillies' World Series run put it on the back burner.

The event has now pivoted to a "Burger Crawl" happening throughout the month of January, when ticket holders can visit participating restaurants to taste competing burgers and vote for their favorites. The month-long festivities will culminate in an awards ceremony held at Xfinity Live!

MORE: Order fried chicken and Prosecco at Amina to benefit the African American Museum in Philadelphia

Now through Tuesday, Jan. 31, participants can visit the more than 30 contenders across the region, each presenting their own unique version of Philadelphia's best burger. Diners can vote for their favorites using the Let's Rallie app, and prizes will be awarded for People’s Choice winners in each category. A panel of judges will also vote for their preferences.

Once voting is complete, restaurants with the top 10 highest-rated burgers will battle to see who will win the 2023 competition during a "Final Showdown" at Xfinity Live! on Sunday, Feb. 5, from 12 p.m. to 3 p.m.

Tickets for the event can be purchased for $50, covering the cost of sampling burgers at the participating restaurants, as well as attending the awards ceremony. Proceeds help raise money to provide after-school technology programming to Philadelphia youth.

In 2010, Rob and Maggie Wasserman, owners of Rouge in Rittenhouse Square, started the Burger Brawl as a neighborhood fundraiser for their children’s school. By 2014, it outgrew its original venue and moved to Xfinity Live! where it's been hosted since, before this year's change in format.

Burger Brawl was last held in 2019. It was cancelled in 2020 and 2021 due to the pandemic, and in 2022 was postponed from October and then November due to scheduling conflicts at Xfinity Live! related to the Phillies' exciting postseason run.

The defending 2019 champion burger is The Pickle Monster from Lucky’s Last Chance, which has locations in Manayunk and South Philadelphia. The winning burger is made with two quarter-pound beef patties, American cheese, pickles, fried pickles, dill-flavored potato chips, pickle relish and pickle aioli on a butter-toasted Liscio’s pub roll.

A full list of participating restaurants for the 2023 event can be found online.