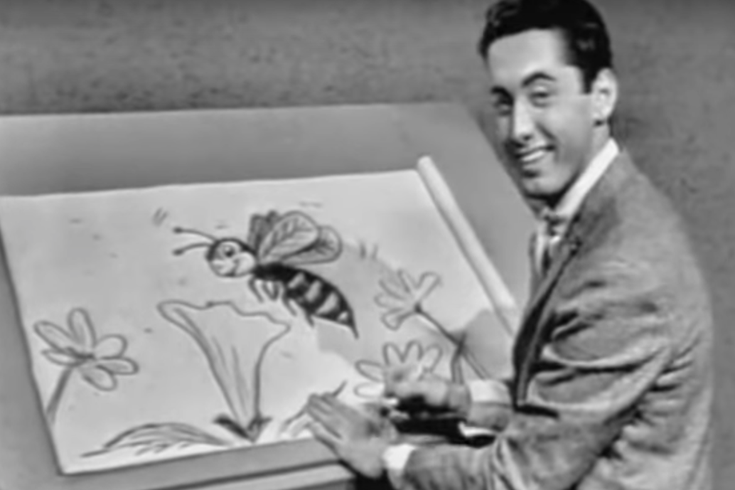 While Pittsburgh had Mr. Fred Rogers, Philadelphia had Gene London.

The former host of the Philadelphia children’s show “Cartoon Corners”, also known as “The Gene London Show”, passed away this past Sunday at the age of 88, his family said. London died at home in Reading, Pennsylvania after suffering a cerebral hemorrhage following a fall last Friday.

From 1959-1977, London hosted “Cartoon Corners” on WCAU-TV 10 in Philadelphia, and according to his obituary, London was known for “impacting and inspiring children with his kindness, wit and creativity.” The program consisted of London inviting children into the general store he worked at to listen to stories that he illustrated by drawing pictures. London also sang the show's theme song.

When London started on “Cartoon Corners” in 1959, it wasn’t his first time working in the Philadelphia area. London got his start working with children at Summerdale Day Camp where he taught puppetry and arts and crafts to campers.

London was inducted into the Philadelphia Broadcast Pioneers Hall of Fame in 2009.

London was born Eugene Yulish in Cleveland, Ohio in 1931, and his career goal was to work for Disney. He would even incorporate his love for Disney into his show by including Disney cartoons.

His television career began in the 1950s when he appeared on a number of ABC and NBC shows in New York City as a ventriloquist. One of London’s early career highlights was appearing on “The Today Show” in 1959, the same year in which he would make the move down to Philadelphia.

“Cartoon Corners” was canceled in 1977, and London moved back to New York City to focus on running a retro clothing shop and becoming a fashion designer. “He was one of the world's pre-eminent experts and collectors of the movie clothing and costumes of Hollywood's notable movie stars,” London’s obituary read.

London and his longtime partner, John Thomas, married in 2016 and lived together in Reading, Pennsylvania and Florida.

Funeral services in Cleveland will be private, and London will be laid to rest beside his parents, according to his obituary. A public memorial will be held in Philadelphia but it has not yet been scheduled yet, according to KYW Newsradio.