The new display features former Eagles quarterback Nick Foles hoisting the Lombardi Trophy after the win over the Patriots, but only his hands are visible 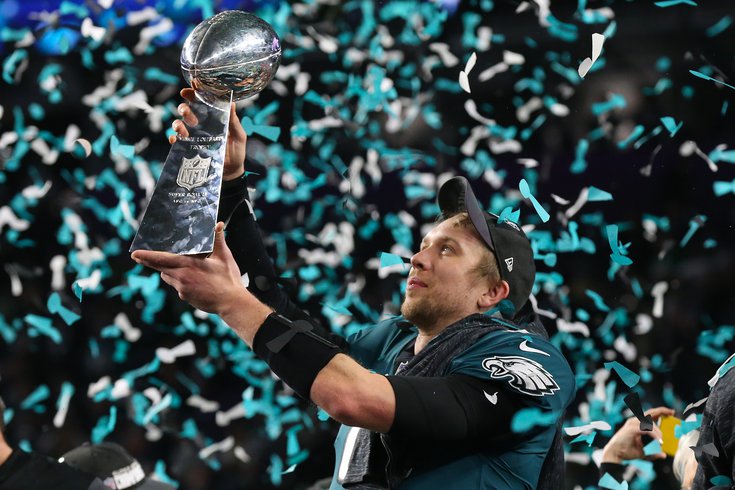 Eagles fans will likely be thinking of Nick Foles when they see the new banner that the team has hung outside Lincoln Financial Field.

The Carson Wentz banner that hung outside Lincoln Financial Field for the past two years is officially no more.

The display of the former Eagles quarterback, who was traded to the Indianapolis Colts in February, was removed on Monday from the stadium's eastern side along South Darien Street.

While it may have taken the Birds five months to get the Wentz image down, it only took the franchise a day to put their new banner up.

When fans return to Lincoln Financial Field later this summer for open training camp practices and preseason games, they will be greeted by a tribute to the team's first and only Super Bowl title from 2018.

The new display features the Lombardi Trophy being held by none other than former Eagles quarterback Nick Foles after defeating the New England Patriots in Minneapolis. However, only Foles' hands are visible in the shot.

A new banner at the Linc 👀 pic.twitter.com/TgvDZWSE7B

The reaction to the new image seemed to reignite the Wentz-Foles debate online, but the photo was selected because "it captured the essence of capturing the first Super Bowl title in team history," according to a team source.

"The banner is entirely focused on celebrating an iconic moment in the history of the Philadelphia Eagles, and in our view, it is entirely irrelevant who is holding the trophy in the photograph," the team source said.

Having the new banner serve as a tribute to Super Bowl LII is a logical and smart choice by the organization. It's not just the finest moment in franchise history; it's the greatest moment in Philadelphia sports history too. And it's an event that all Eagles fans can embrace and remember anytime they come to the Linc for a game.

Although his face isn't pictured on the display, it's impossible not to think of the former Super Bowl MVP when looking at the new banner. Even just the sight of his hands alone are enough to evoke the positive memories he left with Eagles fans as he filled in for an injured Wentz at the end of the 2017 regular season and throughout the playoffs that year.

The Eagles let Foles walk at the end of that season to ensure that Wentz would spend most of, if not his entire, NFL career in Philadelphia. But just three years later, it's Foles whose legacy with the franchise and city is safe and secure.

Now, Foles (kind of) has his own banner and statue at the Linc, as he and former head coach Doug Pederson's "Philly Special" bust remains intact outside the stadium.

Wentz's banner went up outside the Linc in 2019 after the No. 2 overall pick in the 2016 NFL Draft was handed a four-year, $128 million contract extension to all but solidify him as the franchise quarterback for the foreseeable future. Or so most of us thought.

Since Wentz's departure in February, the former first-round pick's display remaining outside of the Linc naturally became a point of conversation among confused fans across the Philly region.

Plans to officially remove Wentz's banner from the Linc were set into motion in early July, as the team said it would have the display down before training camp opened at the end of the month. The team did not reveal at the time who or what would replace Wentz's banner.