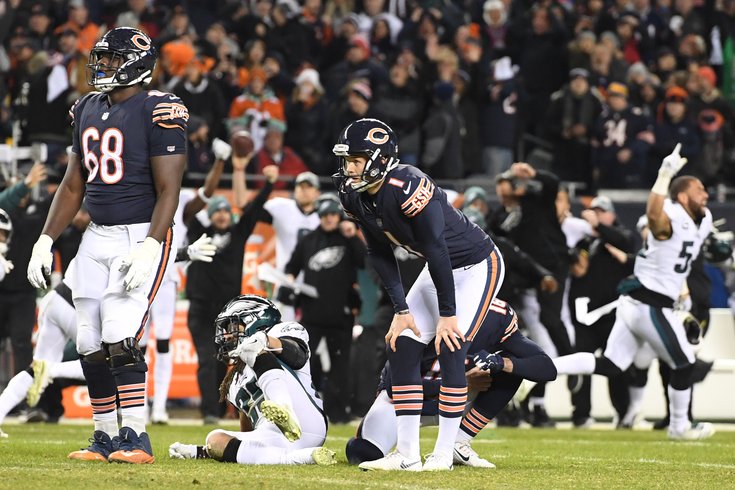 Blame Cody Parkey all you'd like, but the Bears had too many flaws to overcome.

Pending the outcome of Sunday's playoff game between the Philadelphia Eagles and the New Orleans Saints, it looks like Chicago Bears fans will be stuck in the denial stage of grieving for a few more days.

The immediacy of kick Cody Parkey's doomed field goal try was enough to send Chicago into the anger stage before the denial stage, which makes the whole process even harder. They'll be angry whenever they see what happens between the Cowboys and the Rams, who would have been their divisional round opponent.

For now, some Bears fans are trying to cope with the loss by pretending kicker Cody Parkey didn't miss the game-winning field goal at Soldier Field. It's sad, really. It's not losing three NFC Championships in a row or anything, but it's horrible in its own special way.

In one case, a fan edited the radio call to make it seem like Parkey's kick went through the uprights.

In an alternate universe, this is what the call would've sounded like if Cody Parkey made the FG vs. Philly 😢

In another case, a fan edited in footage of a good kick and changed the call by Cris Collinsworth and Al Michaels, who marveled at the magnitude of the situation and Parkey's heroism.

Unfortunately, when these fans turn on their TVs Saturday night, the Chicago Bears will not be playing the Los Angeles Rams. Their justice will be will be served, at least a little, if the Cowboys advance to the NFC Championship game and the Eagles don't.

But that kick will always have hit the upright and the crossbar, for eternity.