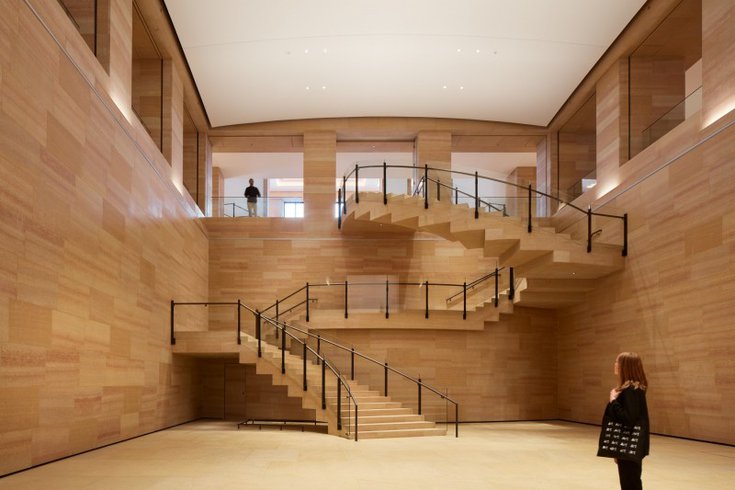 The Williams Forum is part of the Philadelphia Museum of Art's major Core Project renovation, a public space that will facilitate activities and direct guests to galleries on all levels of the building.

The Philadelphia Museum of Art will premiere a new look Wednesday that has been two decades in the making — an overhaul of the historic building's interior and the introduction of new galleries and public spaces designed by world-renowned architect Frank Gehry.

The museum's Core Project, completed after four years of construction, encompasses nearly 90,000 square feet of redesigned and newly created space within the main building, which has stood in the Fairmount section of the city since 1928.

Key features of the renovation include a rebuilt West Terrace and the creation of the Williams Forum, an activity space that connects the ground floor of the museum to its upper levels. The new Vaulted Walkway also opens up a 640-foot corridor that has not been accessible to the public for 50 years.

Areas that previously were devoted to offices, a restaurant and a retail store have been converted into two new galleries that span 20,000 square feet of exhibition space.

The Robert L. McNeil Jr. Galleries focuses on early American art and the role Philadelphia played in its evolution. The Daniel W. Dietrich II Galleries will display the work of 25 contemporary artists with ties to Philadelphia.

"This is an investment in Philadelphia. It is critically important not only for one of this city’s most significant cultural assets, but also for the future of the city," said Leslie Anne Miller, chair of the museum's board of trustees. "It is vital to our economic recovery, but the value of its impact will only become fully evident over time."

To celebrate the debut of the renovation, the Philadelphia Museum of Art will offer a special pay-what-you-wish admission from Friday through Monday. The museum's Senga Nengudi: Topologies special exhibition, the first to be presented in over a year, will be on view in the Dorrance Galleries and the Rodin Museum will reopen to the public for the first time since the start of the coronavirus pandemic.