In Philadelphia, police violence and gun violence not an either-or protest

Critics chastise Black Lives Matter activists for not protesting crime in their own communities. But this city can and has always done both.

On Feb. 11, 2004, a gun battle erupted in broad daylight between two groups of men near T.M. Peirce Elementary School in the Swampoodle section of North Philadelphia. The boy took a bullet to the face. He fought for five days in the hospital before dying.

It was a turning point in grassroots anti-gun violence activism, or so it seemed. Some 2,500 people attended Thomas-Childs’ funeral at Deliverance Evangelistic Church. In the weeks that followed, his name didn’t disappear from newspaper headlines; rather, it was joined by the names of other children whose lives had been lost to gun violence, their families demanding the world “see their pain.”

And that April, they marched with their anger and loss at full-mast. Sponsored by the NAACP, the March to Save the Children was one of the largest single-issue protests in Philadelphia's recent history. An estimated 10,000 people moved through the streets, not against police brutality, but against the general epidemic of gun violence.

Amid the current unrest over police-community relations across the country, former New York City Mayor Rudy Giuliani is one of many public figures to chastise Black Lives Matter protesters for not combating crime within their own communities. Critics like Giuliani use the refrain of “black-on-black crime” to discredit protests over police brutality across the country. It’s a problematic claim for a number of complicated reasons. Most concerningly, the argument dismisses decades of mobilization around violence prevention in America’s inner cities, and underscores the barrier that prevent its success.

Granted, when a young person is senselessly gunned down in today’s Philadelphia – either on purpose (a 15-year-old last month), by a bullet meant for someone else (an 18-year-old in March), or by criminally negligent gun storage (too many to count) – protesters don’t flood into the streets as they do after a police-involved shooting. But this clearly hasn’t always been the case. The momentum after the Thomas-Childs tragedy was real.

Whether or not Thomas-Childs had something to do with it, the anti-gun violence scene is far more integrated than it was a decade ago.

The Philly Coalition for REAL Justice, a group that organizes protests against police violence, says essentially the same thing.

“We definitely don’t condone any type of violence in any community, but our [group] is dedicated to combating police violence,” said Megan Malachi, a spokeswoman for the coalition. “There are other communities that do that work, and we do our work.”

Mothers in Charge, which now has 10 national chapters, focuses on intervention and education. The organization is part of a statewide anti-violence coalition with CeasefirePA. In 2014, Johnson-Speight and her team hosted a national conference in Chicago on the direct and indirect costs of gun violence. (For a primer on the complexities of the issue, criminologist David Kennedy’s address at that conference is one of the most sympathetic and historically coherent elucidations.)

There’s the 30-year-old Anti-Violence Partnership of Philadelphia. And a small group called Philadelphia Artists Against Gun Violence, whose recent blog post addresses Black Lives Matter allegations and violence. As of 2012, there were at least 27 anti-violence organizations in Philadelphia. Some of them are no longer active. But grassroots groups like Operation Save Our City have cropped up in some of the city’s bloodiest neighborhoods, calling for peace and quietly working with stakeholders. The list would be even longer if extended to multi-issue advocacy and service groups.

By way of institutional protest, Scott Charles helps maintain four violence prevention programs through his job as the trauma outreach coordinator at Temple University Hospital. One of the programs, Cradle to Grave, gives vulnerable youth a no-frills look at the realities of getting shot. Another program provides free gun locks to anyone in the city — no questions asked. Since he came to Philly 20 years ago, Charles has been chipping away at the gun violence plague from within the system. 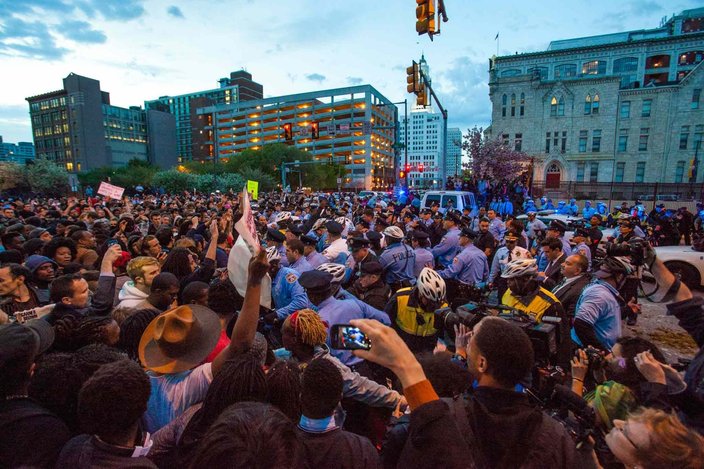 Protesters come face-to-face with Philadelphia police officers at Broad and VIne streets in Center City Philadelphia on April 30, 2015. The protest, held to show solidarity with protesters in Baltimore in the wake of Freddy Gray's death in police custody, was organized by the Philly Coalition for REAL Justice, a group that combats police violence.

'KIDS STARTED SHOOTING EACH OTHER AGAIN'

To his mind, the Thomas-Childs murder showed that mass protest wasn’t enough.

“This was supposed to be a watershed moment,” Charles said. “All these things took place and the community was mobilized, but nothing happened on a systematic level. Everything went back to normal. Kids started shooting each other again. On some level, that marching proved to be ineffective.”

In a way, Charles was right. The groundswell was there, but the political will lagged a few years behind. The year of Thomas-Childs’ murder, the city clocked 330 homicides citywide, 263 from gunshot wounds. More than two-thirds of the victims were black. By 2007, Philadelphia watched its homicide numbers break 400, a level it hadn’t seen since the peak of the crack wars in the 1990s.

Then along came former Mayor Michael Nutter, who ran his 2007 mayoral campaign on a pledge to reverse the violent surge that the city experienced under former Mayor Street. And within a few years, thanks to former Philadelphia police Commissioner Charles Ramsey, the city had its largest decline in homicides in decades, bringing the total body count to 1960s levels.

One of the most proven measures to decrease violent crime was Focused Deterrence. It’s not a program, but a city policy practice: identify young men who are likely to shoot or get shot, offer them job training and other social services, and promise increased law enforcement if the violence doesn’t stop. This strategy correlated with a 43 percent decrease in South Philadelphia shootings in 2013, with homicides dropping by 50 percent.

Under freshman Mayor Jim Kenney’s watch, the body count is ticking slightly upward again citywide. Kenney ran on a platform to increase Focused Deterrence, but there has been little talk of it publicly since he assumed office.

In recent months, City Council has held hearings to address youth gun violence. Dozens of big players in public safety have shared their views about where to put policy. It’s unclear what will come out of all this. But the anti-violence advocates have been and will continue to be present, even if they’re not always marching with cardboard signs.