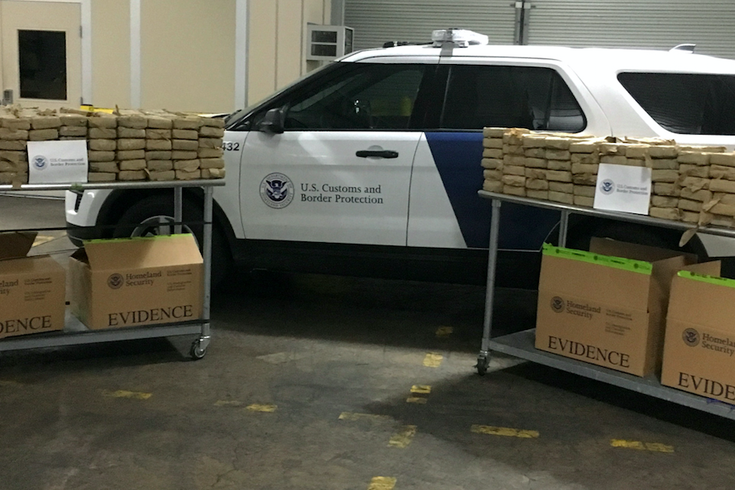 Authorities found 13 large black duffel bags containing a combined 450 bricks (537.6 kilograms) of cocaine aboard the MSC Desiree at the Port of Philadelphia on March 19, 2019.

U.S. Customs & Border Protection agents joined Homeland Security officials for a Thursday morning press conference to announce the details of the massive cocaine bust at the Port of Philadelphia earlier this week.

Reports of the narcotics seizure surfaced Tuesday afternoon as CBP agents conducted an investigation of a shipping container aboard the MSC Desiree, which had been on its way to Europe en route from Colombia.

Inside one of the containers offloaded from the ship, officials said they found 13 black duffel bags containing a combined 450 bricks of a white powdery substance that has tested positive for cocaine.

The total weight of the cocaine was more than 1,185 pounds, which has a street value of $38 million. That was even more coke than earlier reports, which has said agents seized 992 pounds, worth $18 million.

“Taking a half-ton of dangerous drugs out of circulation is a significant success for this collective team of federal, state and local law enforcement officers who work very hard every day to keep people safe,” said Casey Durst, CBP’s Director of Field Operations in Baltimore. “Customs and Border Protection remains committed to working with our law enforcement partners and to disrupting narcotics smuggling attempts at the Area Port of Philadelphia.”

An investigation into the narcotics remains ongoing under the direction of Homeland Security Investigations.