Feds seize 709 lbs. of cocaine at Philly port, largest haul in a decade 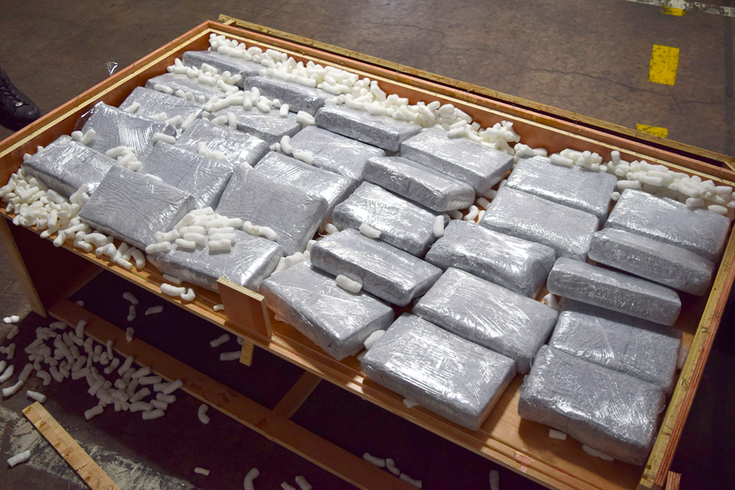 Cocaine found in shipping container inspected by federal officials at Port of Philadelphia in Nov. 2017.

Federal authorities recently intercepted the largest shipment of cocaine to reach the Philadelphia area in the last 10 years, uncovering more than 320 kilos concealed inside furniture sent from Puerto Rico.

U.S. Customs and Border Patrol officials said Monday that the seizure took place Nov 2. after a suspicious shipping container was detected at a seaport in Pennsauken, Camden County.

CBP officers noticed an anomaly in the container and transferred it to the agency's Centralized Examination Station in Philadelphia. When inspectors emptied the contents of the container, they found false walls installed in several pieces of bedroom furniture and kitchen cabinets.

The compartments were carrying 256 bricks of what later field tested as positive for cocaine.

Weeks later, on Nov. 30, authorities found another 13.56 kilos of cocaine inside a wooden chest delivered to the same seaport. The drugs were destined for nearby Cinnaminson, Burlington County.

Combined, the two seizures weighed out at about 709 lbs. with a street value of approximately $22 million.

The bust represents CBP's largest cocaine seizure since March of 2007, when authorities found 864 pounds of cocaine concealed in a shipping container from the Dominican Republic. The recent seizure marks the sixth largest cocaine bust in CBP history and the 10th largest seizure of any illicit drug at the Port of Philadelphia.

“This seizure is an excellent example of how Customs and Border Protection officers leverage imaging technology to detect and intercept an immense amount of cocaine cleverly concealed in a shipment of furniture,” said Casey Owen Durst, CBP's operational commander in the mid-Atlantic region.

“Narcotics interdiction remains an enforcement priority for Customs and Border Protection, and a mission that we take very serious.”

Immigration and Customs Enforcement's Homeland Security Investigations unit continue to investigate the shipment and its source.