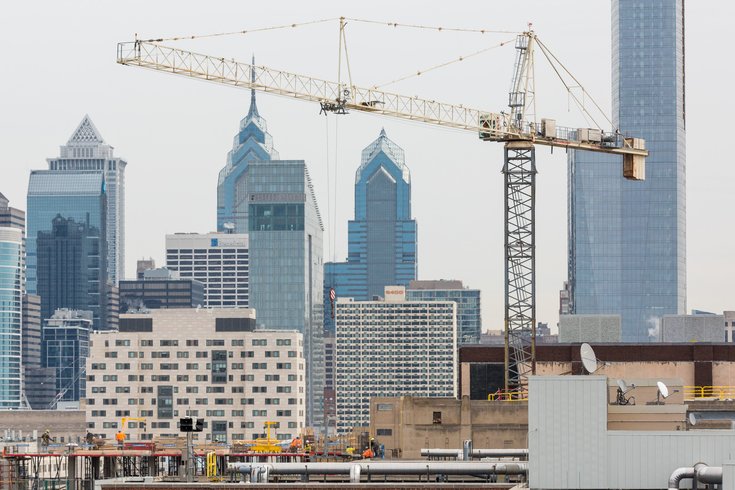 Looking east at the Philadelphia skyline from University City.

Nearly 20 years after Philadelphia accelerated real estate development with the incentives of a 10-year tax abatement, the future of the policy and historical effects have come under the microscope.

Enacted in its current form in 2000, the tax abatement provides a 100 percent benefit for new construction and the value of any improvements or conversions to existing properties.

With rising property value assessments throughout Philadelphia over the past two decades, many neighborhoods have seen an increase in taxes influenced by new construction. But the new properties in these fast-developing neighborhoods are untouched by their own impact for a decade.

What to do about the policy moving forward, particularly as city officials weigh an increase in local property and real estate transfer taxes, has become a matter of intense debate among stakeholders from developers, policymakers and trade groups to neighborhood associations, affordable housing advocates and other community organizations.

Philadelphia City Controller Rebecca Rhynhart, who took over the city's independent auditing agency in January, released a detailed policy analysis on Friday examining various outcomes of the 10-yeart tax abatement since its inception. The report also offers six alternative scenarios to reform the tax, from eliminating it entirely to adjusting its target and amortizing it over a 10-year period.

“The 10-Year Tax Abatement, a much-needed tax incentive at its inception, has spurred development in the city — development that may not have happened otherwise," Controller Rhynhart said in a statement. "On the other hand, long-time residents and homeowners feel frustrated by what they believe to be an unfair benefit going to wealthy developers, investors and individuals. With yet another property tax rate increase on the table, this frustration is only growing."

About 26,800 properties have been granted an abatement in Philadelphia since 2000. About 60 percent have historically been new construction and 40 percent improvements or conversions. A cumulative total of $38.5 billion in assessed value has been abated, amounting to a cumulative total tax benefit of $1.05 billion to Philadelphia property owners and developers.

Source/Office of the City Controller

The 12,477 properties with expired abatements received a cumulative tax benefit of $609 million. The latest annual property tax revenue associated with these properties was $83 million per their assessed values as of last month, assuming a 100 percent collection rate. That revenue – which is shared with 55 percent for the School District of Philadelphia and 45 percent for the city – might not have been generated in the absence of an abatement policy.


A closer examination of historical and geographic data on the tax abatement shows that the cumulative tax benefit of the policy isn't distributed equally across the city. Rhynhart's office revealed several stark highlights from the audit:

• Philadelphia has added 15,000 properties over the last 15 years, moving the city's total to 580,133 on the rolls of the Office of Property Assessment. Philadelphia regional share of real estate development has outpaced the surrounding suburbs. 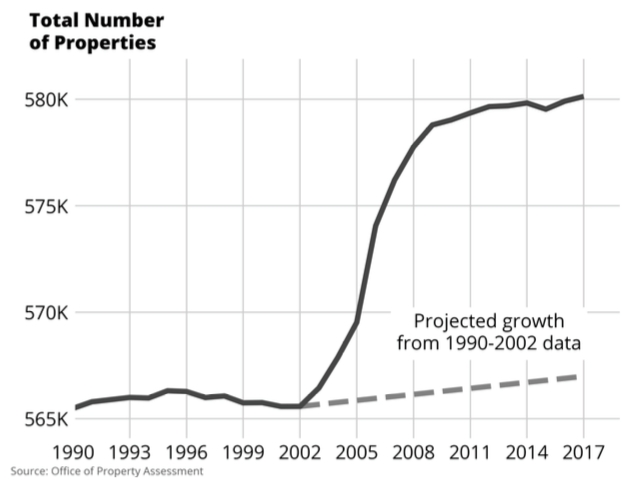 • Abated properties valued above $700,000 make up just 7 percent of actively abated properties, but receive more than half, 51 percent, of the tax benefit from all abatements.

"My goal in looking at the ten-year tax abatement was to provide the Mayor and City Council with the information needed to make a data-driven decision as to keeping, ending or changing the policy," said Rhynhart. "Incentivizing growth is important for the entire city, but it must be done in a fair and inclusive way. This analysis is a starting point for how to move forward as a city with that in mind.”