In 2015, there were more than twice as many deaths from drug overdose in Philadelphia as there were from homicide

Philadelphia's Department of Public Health has published a striking summarization showing the growing deadly epidemic of opioid overdoses that have a strong hold on many city residents.

By charting statistics on deaths resulting from opioid overdoses from the past decade through 2015, the city's health department reveals certain growing trends amongst drug users.

For example, there's been a recent sharp spike in deaths related to the use of heroin and fentanyl – the latter a powerful synthetic opiate similar to but more potent than morphine" meant to treat patients with severe pain, according to the National Institute on Drug Abuse. 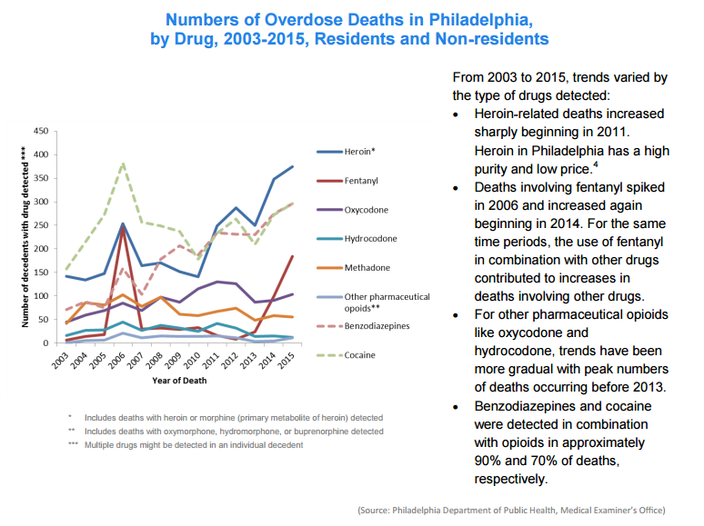 The statistics also show that in 2015, Philadelphia experienced more than twice as many deaths from drug overdose than from homicide. The group at highest risk of opioid-related deaths last year were white men, particularly those in the age range of 25–59 years. 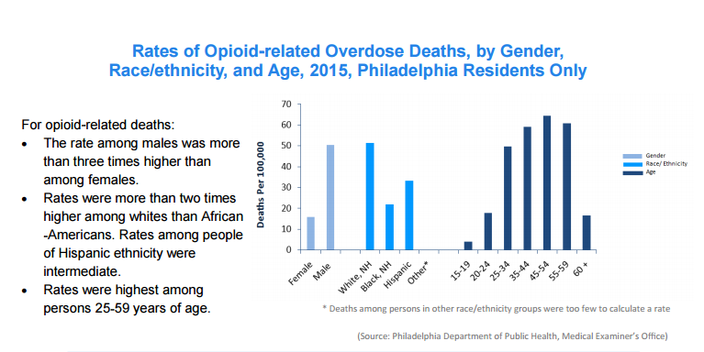 The purpose of publishing these statistics, which made up the Philadelphia Department of Public Health's June 2016 CHART publication, is to "highlight under-reported or underappreciated public health issues in an effort to kick-start a conversation," it said.

The health department also offered recommendations to readers, including suggesting people in contact with those who use opioids obtain the antidote naloxone.