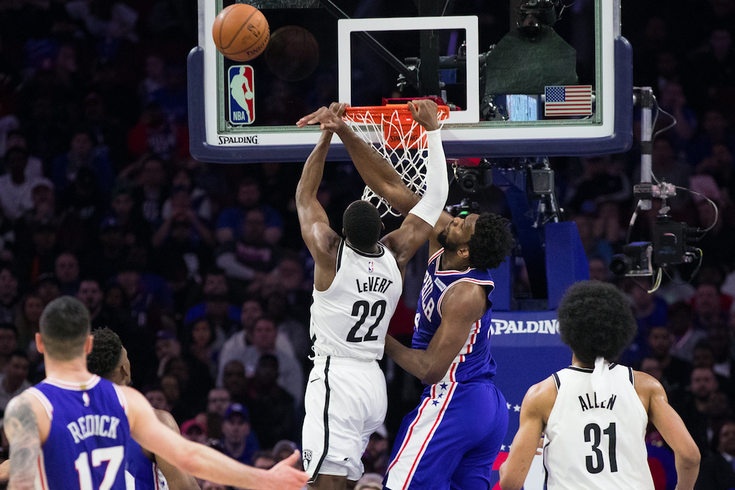 Brooklyn Nets guard Caris LeVert (22) is fouled by Philadelphia 76ers center Joel Embiid (21) on a dunk attempt during the second quarter in game two of the first round of the 2019 NBA Playoffs at Wells Fargo Center.

The Philadelphia 76ers and Brooklyn Nets are even at one game apiece as the playoff series shifts to the Barclays Center on Thursday night.

It's starting to look like this matchup may turn into a rivalry in the years to come — and this moment may be one to remember.

Joel Embiid caught Jarrett Allen with a hard elbow and was given a flagrant 1. pic.twitter.com/scfnb8Oj1N

Several Nets players, including guard Caris LeVert, said they were not happy with the way Joel Embiid and Ben Simmons laughed about the hard elbow Embiid delivered to Jarrett Allen's face in Game Two.

RELATED: Sixers getting slightly healthier as series shifts to Brooklyn

During the postgame press conference, Embiid apologized for the elbow, but he and Simmons couldn't help but laugh at it.

Sixers' Joel Embiid & Ben Simmons crack up laughing while Embiid was trying to apologize for flagrant elbow to Nets' Jarrett Allen during Game 2 win: "I got him pretty good but I'm sorry about it. it wasn't intentional. .... I'm not usually humble that's why he's laughing." pic.twitter.com/Ll1wuTHEk3

"We thought that was kind of disrespectful, especially after the elbow he threw," LeVert told ESPN's Ian Begley during Wednesday's media availability. "It is what it is. There's no love lost. It's a playoff series. We expect that."

Jared Dudley on Embiid laughing at the podium: "I felt a certain type of way about it. Just because you’re laughing when somebody could’ve gotten really, really hurt. That’s been Embiid’s personality. But just because it’s your personality doesn’t mean it’s right."

Some have argued that Embiid, who was called for a flagrant 1, should have been ejected from the game, particularly when the elbow is compared to the shove that got Pistons center Andre Drummond ejected from a game the other night. Others, including TNT's Shaquille O'Neal, have defended Embiid's play as an example of incidental contact from what centers are taught to do in the post.

Brooklyn hardly needs added fuel to try to pull the first round upset over Philadelphia. But these comments and the level of competition thus far suggest this series could get chippy over the next week.