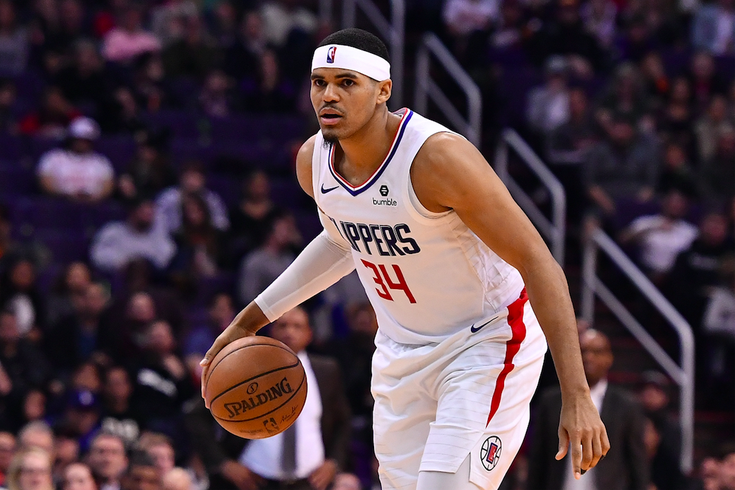 The Philadelphia 76ers pulled off a blockbuster trade with the Los Angeles Clippers overnight Wednesday, landing forward Tobias Harris to complete one of the most fearsome starting units in the NBA.

An aggressive move from general manager Elton Brand now gives the Sixers a better chance to overcome their struggles against the top teams in the Eastern Conference, who have been an obstacle for Philadelphia despite the Sixers' strides.

With Jimmy Butler and Harris both set to become unrestricted free agents at the end of the season, the trade raises major implications for the Sixers' upcoming summer. For now, they have assembled an imposing top-end roster that gives them a fighting chance to rise through the playoffs come May.

Here's a look at some of the best Twitter reactions to the deadline trade.

When the trade deadline is upon us i must do things quickly, so here we go. @tobias31 - good luck in @sixers ! #tobiasharris #trade #nbatrade #philadelphia #sixers #HereTheyCome #aomcustoms pic.twitter.com/30LJ3cD2MD

The @sixers obviously won that trade! We now have Mike Scott on our team...AKA MICHAEL SCOTT....#HereTheyCome pic.twitter.com/Uv3BwosGKS

The Tobias Harris trade was a nightmare for Toronto.
1. Sixers made the East that much tougher. Playoff 2nd round will be brutal.
2. Clippers put themselves in prime position to pry away Kawhi Leonard and render Raptors' summer gamble a big L.
More:https://t.co/YwlKNUsMZF

After the Tobias Harris trade, the sixers' odds to win the East doubled 👀 pic.twitter.com/YMUQ79bcoj #SportsGameApp

The Sixers have made two franchise-altering trades in the time that Bryce Harper and Manny Machado have been free-agents. Didn’t see that coming.

i asked my boss (the huge sixers fan) if he heard about the trade the sixers made this morning, he replied with “who did they get? did they trade okafor?” pic.twitter.com/OtYAEmpUI8

When the Sixers make a big trade pic.twitter.com/4vZCENU5R7

Meh, Elton Brand spending every last dime the sixers had saved up over the last 5 years on two trades for unrestricted free agents is not exactly ideal. It’s NBA finals or bust this season now.

They could have thrown anyone but Shamet in that trade and i would have been happy. He was one of the guys who as a rookie actually played for the sixers and did things. I’m just hurt because he was one of my favorites 😪

When i got the notification for the #Sixers #Clippers trade at 3 am pic.twitter.com/V3pDlzG0Xw

Special shoutout to the guy at the Sixers game last night that heckled Brand to make a trade move https://t.co/V7Q4lhdmrC

Don’t like the Sixers trade , Shamet was really useful for this team and get rid of him plus first rounds is too much . #HereTheyCome #NBATradeDeadline

They’ll likely have to overpay to keep Tobias Harris. It is absolutely critical they hit on Smith + this draft + undrafted dudes to fill up this roster

If they don’t. This trade could be a massive failure

RAW footage of LeBron James during his meeting with Magic Johnson after seeing the #Sixers trade.#LakeShow #HereTheyCome pic.twitter.com/jv8wKZZxQk

The #Sixers can pay them all if they want to. I however would trade Simmons for someone who can shoot and get a real point guard that could really open up the floor. https://t.co/Gcww4udJa6

Man that 76ers trade made them really dangerous if they can click together from the start. I followed @BobanMarjanovic for whole my life and that dude can work down low.Harris all star calibre player that will strech the game for them. @sixers show us what you got. pic.twitter.com/lKCShHZkCn

Tj on the sixers bench after the trade pic.twitter.com/JkCfQ7nRwB

There were a lot of trades involved, so apologies if I made an error or two. But I think I traced the trades to acquire Butler AND Harris back to the Sixers trading Jrue Holiday to the Pelicans. Crazy to see how it all comes together years later. pic.twitter.com/LJtgKyml1x

The fact that the Sixers have gotten away with two trades for All-Star caliber players without trading Fultz is crazy. If this man ever remembers how to shoot a basketball and goes back to the form of a No. 1 overall pick, or even a role player at this point, watch out #Sixers