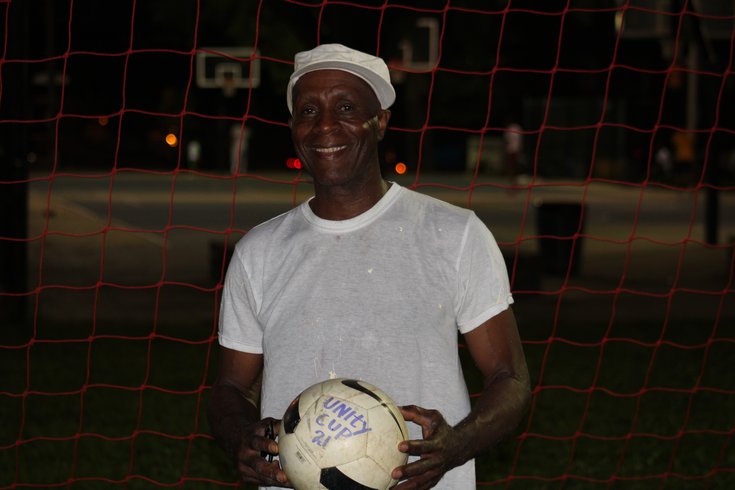 Paul Williams, 58, is the unofficial groundskeeper of Finley Rec Center and an honorary member of Team Jamaica in the 2021 Philadelphia International Unity Cup. Williams tended to professional soccer fields in his native Jamaica and has transformed the team's field.

As the sun set on a late-August evening, Jamaicans from throughout Philadelphia strode across a field at the Finley Recreation Center. For many, the field is a second home; a place where for years friendships have been cultivated over countless pick-up soccer games on Sundays.

Laughs were flowing, but the night was less business as usual and more let's get down to business. In three days, these men would represent their country against Gambia in Philly's equivalent of the World Cup.

Lining up with the team for calisthenics was a man wearing a white painter's hat, black sweats and white T-shirt underneath an orange reflective vest. He wouldn't play against Gambia and, at 58, has at least three decades on most of the men running next to him, but he matches their energy step for step.

He knows the field better than anyone because, over the course of the summer, he's willed it to life using techniques he perfected on professional soccer pitches back home. Meet Paul Williams, the unofficial groundskeeper of Finley Rec Center in West Oak Lane and an honorary member of Team Jamaica in the 2021 Philadelphia International Unity Cup.

In just a few months under Williams' care, the soccer field at Finley has evolved from a dirt bowl, riddled with rocks and holes, into a formidable pitch complete with boundary lines.

When Williams isn't working his maintenance job at the Philadelphia Corporation for Aging, you'll likely find the soccer fanatic at the rec center manicuring the field with a push mower or removing weeds with his trademark machete in preparation for the Jamaicans' next practice.

One neighbor who lives across the street was shocked to learn the man she watches labor diligently over the field on a daily basis is closer to 60 years old than he is to 30.

In Williams' younger days, groundskeeping paid the bills. Now, it's good exercise, and it keeps him connected with other members of the city's close-knit Caribbean community. All he asks for in return are bottles of water. 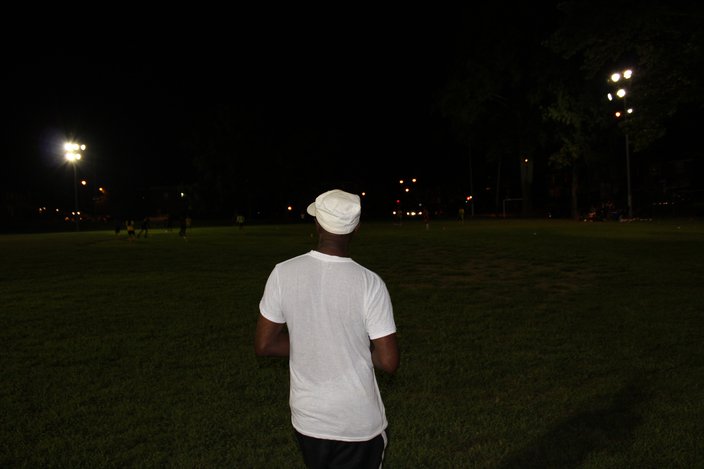 Paul Williams watches Team Jamaica practice at Finley Recreation Center on Thursday, Aug. 26, 2021. Williams, 58, has become an unofficial groundskeeper at the field after working on professional soccer fields in his native Kingston.

Williams was born in Kingston, Jamaica, where he said his grandmother recognized his aptitude for cultivating pumpkins and other crops at an early age.

"She said, 'Boy, you might have some green thumbs – whatever you plant, there's always been a whole lot of it. You must go into planting.' Even my mom is like that; she plants pumpkin, and you get a whole lot of pumpkin," he said.

Eventually, Williams said his love of soccer led him to a job as equipment manager for Olympic Gardens FC, a professional club based in Kingston. Under the tutelage of a tenured groundskeeper, he learned how to mark pitches and put his green thumbs to use by assisting with the various field maintenance operations. One project, he said, even caught the attention of Prime Minister Andrew Holness.

"They (had) a soccer field that nobody could get the grass on because it was all sand," Williams recalled. "I thought to get … guys with a truck to dump manure on the field, and when I get our grass to come to perfection, they were all amazed, (saying), 'Man, what did you do?' I said, 'Generally, if it's all sand like in the middle of the desert, there can't be no grass, you have to get soil.' So what'd I do? I got soil and put it there, and there was grass.

"The prime minister, he knows my name in Jamaica. It was a miracle catching that field." 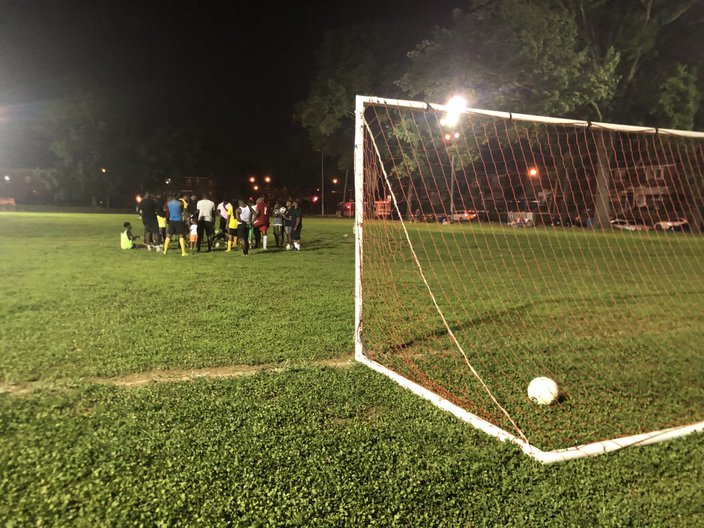 Members of the team representing Jamaica in the 2021 Philadelphia International Unity Cup gather after a practice Thursday, Aug. 26, 2021, at Finley Recreation Center. The team finished group play with a 2-1 record and take on Team USA on Friday, Sept. 24, in the Round of 16.

Williams continued groundskeeping until he followed his mother and other family members to Philadelphia in 2014. He doesn't live far from the pitch at Finley, at 7701 Mansfield Avenue, but said he stayed away from the field until recently because someone gave the players who congregated there a bad rap.

"I heard that the guys, they behave badly – they curse. I'm a church person. I don't like to hear curse and fight," he said. "So it keep me away, but then when I came it wasn't so bad after all. These guys, at times they will do like anybody else will do that stuff, but it's all good."

More concerning than any of the players' behavior, Williams said, was the condition of the field. The middle was a sea of dirt with more rocks than grass – unfit for pick-up games, let alone to serve as the designated training ground for a team that is representing his home country in a citywide tournament. 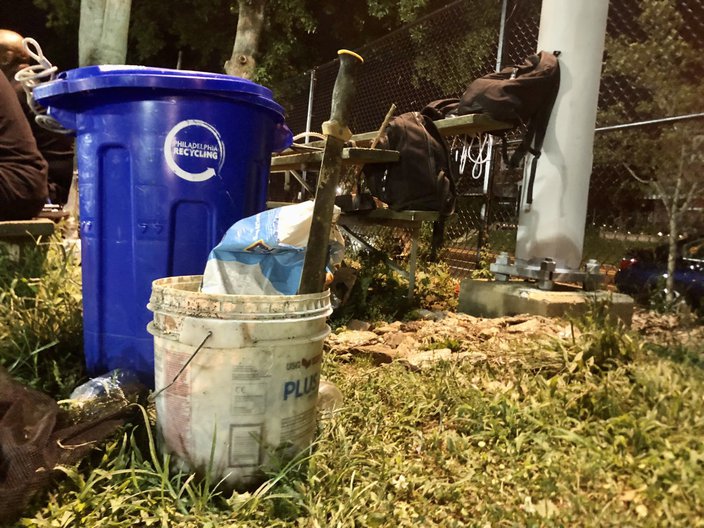 Paul Williams uses the machete, shown in the bucket above, to remove weeds from the soccer field at Finley Rec in West Oak Lane. Williams, 58, began tending to the field in the summer and has become an honorary member of the team representing Jamaica in the 2021 Philadelphia International Unity Cup in the process.

So Williams approached Jamaica's coach during a Unity Cup practice with a proposition: Move players to the side of the field that was in decent condition and let him work his magic on the barren patches of dirt.

When his green thumbs got the green light, first, he removed as many rocks as he could find from the playing surface, piling them up next to the field's wooden bleachers. From there, he collected soil from other areas of the rec center property and the surrounding neighborhood, scattered it across the bald spots and showed up day after day to give the ground some much needed TLC – and to shoo away people letting their dogs poop where his fellow Jamaicans and others play the beautiful game.

A few months later, the team is reaping what Williams sowed. Outscoring opponents 18-1, Jamaica finished group play with a 2-1 record and advanced to the Round of 16, where they'll play against the United States on Friday evening at James Ramp Playground in Holmesburg.

The team's manager, Alvin Melhado, said Williams' work ethic has inspired players, who rave about being able to embrace a fast-paced, aggressive style during practice without worrying about twisting an ankle in a hole or on a rock.

"They're coming out to practice because he's putting out the work," Melhado said. "He's the encouragement that they needed. He's gonna continue doing what he's doing, and hopefully we can win the whole thing."

For Williams, the relationship is reciprocal. Seeing the young Jamaicans succeed – and have something to be proud of when they host other teams for scrimmages – gives him the energy to keep the field in top condition.

As the Jamaican team's final practice before the Unity Cup came to a close, last month. Williams got up from his seat on the sideline and joined the team on the lush green field.

Some scant patches of dirt remained, but there'd be time for them later. He listened to the coach stress focus and teamwork to the players when they take the field against Gambia. Once strangers, many of the young men by Williams' side became friends over the summer; they offered him rides to and from practices after his electric scooter broke down.

Toward the end of the night, Williams peppered shots at the team's goalie, who laughs when he's asked about the 58-year-old joining in on the occasional pick-up game.

"He's good for an old head," the goalie said.

When the coach is done speaking, Williams took his spot in front of a goal for team pictures. He smiled as he gazed across the field stretching out in front of him – the pitch he had transformed one new blade of grass at a time.