As World Series picks up in Philly, Astros' cheating scandal called out in another billboard on I-95 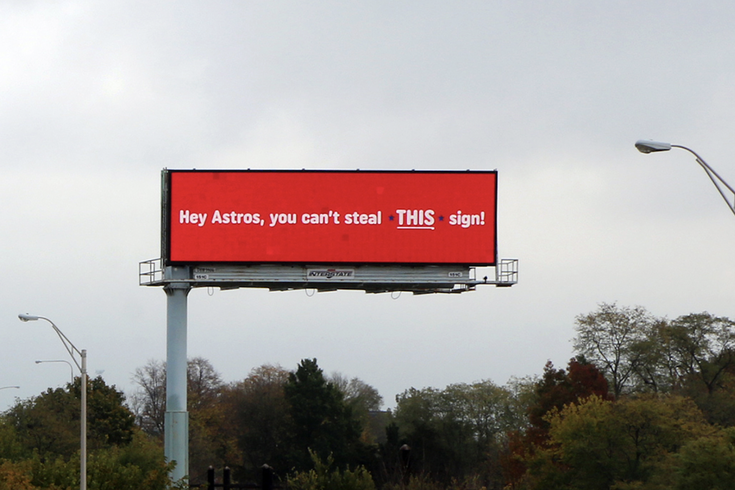 The Houston Astros, reviled for their notorious sign-stealing scandal in 2017, will meet the Phillies for Game 3 on Tuesday night at Citizens Bank Park. The World Series is tied 1-1.

Both of Philadelphia's major highways are now decked with billboards reminding the world that the Houston Astros stole signs from their opponents during the team's 2017 World Series run.

Yesterday, it was a billboard on I-76 that quipped, "Had a funny sign but the Astros stole it!" That one was put up by personal injury firm Top Dog Law. On Tuesday, another billboard debuted on I-95 northbound approaching the sports complex. It says, "Hey Astros, you can't steal this sign!" This billboard was paid for by Drew Katz, the CEO of Interstate Outdoor Advertising.

The animosity between the Phillies and Astros, and their respective fan bases, is starting to rev up ahead of Tuesday night's Game 3 at Citizens Bank Park, with the World Series tied 1-1. The extra day's wait, thanks to Monday night's rain postponing the game, has only added fuel to the fire.

Astros pitcher Justin Verlander smiled and flipped the bird at Phillies fans twice on Monday, leading some to falsely speculate that the exchange arose from Philly fans somehow breaking the window of an Astros team bus. Verlander later clarified that the back-and-forth was all in jest, and that Phillies fans weren't responsible for the busted window on the bus.

All the context Darren… Whole interaction was in jest as all the fans around you were just saying hello in their native tongue. So I responded in kind. 🤣 🤣 all in good fun. I enjoyed the banter. Also, nobody broke the window. Was just like that 🤷🏻‍♂️ https://t.co/PSk5jzK2nT

Verlander may have picked up the "native tongue" from Carson Wallace, the five-year-old kid who attended Game 1 in Houston and got in the face of an Astros fan. Wallace also shouted, to the Houston crowd at large, "F the Astros." That's after another young Phillies fan flipped off a San Diego reporter during the NLCS. Verlander isn't wrong here.

But the whole cheating subtext to the 2022 World Series, from the Astros' Martín Maldonado using an illegal bat in Game 1 to pitcher Framber Valdez allegedly using a sticky substance on the mound in Game 2, is starting to spill into a bigger discussion about shady behavior baseball.

The Athletic's Jayson Stark said Tuesday on "The Best Show Ever?" podcast that he suspects the league is turning a blind eye to pitchers who may be using substances to improve ball control and spin. Stark pointed out that there's been virtually no league discipline since last season's crackdown on pitchers using resin-based Spider Tack.

"Because of that, you shouldn't think whatever's going on is just the Astros," Stark said.

Fair enough, if that's true, but the 2017 scandal, which involved Astros players banging on trash cans to let batters know about off-speed pitches, is one of the most egregious examples of coordinated cheating in professional sports. It's hard to live that kind of thing down, even if Houston has cleaned the clubhouse up since then.

Maybe that's why a BetOnline poll found 88% of the country wants the Phillies to win the World Series.

According to a Twitter study by BetOnline, 88% of the country is rooting for the Phils to beat the Astros in the World Series

When a city whose sports motto is, "No one likes us, we don't care," gets that kind of support, it's a pretty clear sign the Astros wrecked their image and the people who participated in the 2017 scandal have no one to blame but themselves.

For all the money spent on these billboards, someone should pay the Phillies to blast this song into the ballpark when the Astros are batting.