What they're saying about the Phillies: World Series Game 3, Take 2 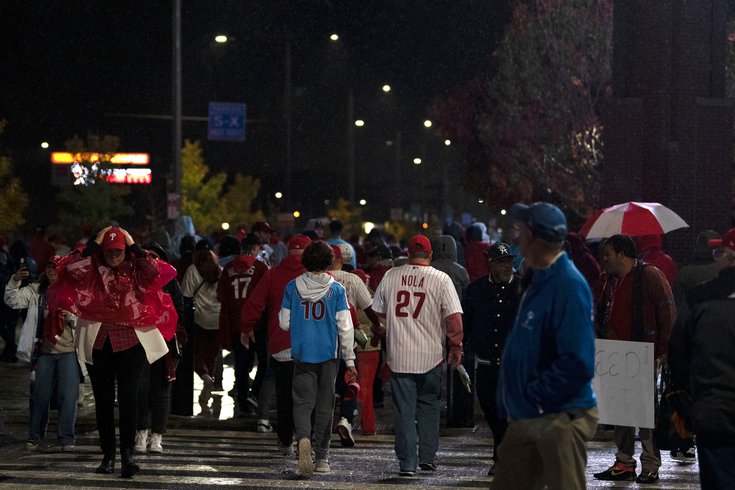 Phillies fans leave Citizens Bank Park on Monday night after Game 3 of the World Series was postponed due to rain.

You just had to assume the game was on until told otherwise.

The tarp was pulled over the infield, the rain fell and was expected to only grow steadier, but fans still made their way to Citizens Bank Park while Major League Baseball held out as long as it could on a decision.

Fans, in raincoats, ponchos, and Halloween costumes, left the ballpark and dispersed back into the parking lots.

The tickets are still valid to the game number and no one should have to pay for parking again so long as they kept their receipt.

But it definitely wasn't the cleanest of decisions. Plans, no doubt, have been changed because of the postponement, and what was already an extremely busy week-plus in Philadelphia sports just got even more intense.

As far as actual game-planning goes, however, this may have worked to the Phillies' benefit.

We'll try it all again Tuesday night, with expected clear skies, but for now, here's what they're saying about the Phillies after Game 3's postponement...

Keeping the Wheels on

As our own Evan Macy noted in his five reasons why the postponement helps the Phillies, the starting rotation is essentially being given a chance to reset.

Ranger Suárez is able to start Game 3, Aaron Nola will pitch Game 4, then the bullpen start will come in Game 5 with either Noah Syndergaard or Kyle Gibson on the mound. The Phillies will also have more of the bullpen to work with too.

Zack Wheeler is also getting extra rest, which lends credence to the idea that something's not entirely right with him.

Via the Inquirer's Scott Lauber following the postponement, with color from manager Rob Thomson:

Just as important, maybe even more so, Zack Wheeler will get an additional day of rest for his sore left knee and tired right arm before starting Game 6 on Saturday night in Houston, assuming the series goes that far after the teams split the first two games.

Thomson might as well have cartwheeled into a post-rainout news conference Monday night.

“It’s the right decision, really,” Thomson said. “I think everybody would rather just play in dry conditions. We know we’re going to get it in. It’s going to be fair for everybody, and we’ll go get it.”

Wheeler acknowledged after Game 2 that he may have hit a wall, chalking up the velocity slide to being “just late in the season.” Thomson shot down a question about whether Wheeler is experience a recurrence of the elbow inflammation that caused him to miss five starts late in the season.

In that case, the rain will buy Wheeler an extra day to catch his breath. [The Inquirer]

MLB Commissioner Rob Manfred says playing game 5 of the World Series Thurs afternoon,given the Eagles play the Texans Thurs night in Houston,didn’t work:“For the World Series an important consideration for us is having the biggest audience we can get.That’s a prime time audience” pic.twitter.com/YcXurRKwQ2

This means the World Series will go toe-to-toe with Eagles-Texans on Thursday Night Football. Those in the Delaware Valley (or there in spirit) are going to need dual monitors or maybe even put the Eagles in the rearview for a week if we're looking at a possible clinching scenario.

Most sports fans, meanwhile, will pick one or the other and leave it at that.

But Bo Wulf, who covers the Eagles over at The Athletic, proposed an idea that I think is worth highlighting (Jimmy Kempski all ready did in his weekly Eagles power rankings roundup too):

The head-to-head between “Thursday Night Football” and Game 5 of the World Series is a little nonsensical following Monday night’s rainout. The NFL has never been one to accommodate others, but the Eagles should propose moving Thursday’s game against the Texans to Friday. The goodwill they would engender within the city would be priceless. They don’t play again after this week until the following Monday night, so there’s no real sweat off their back. It’s an Amazon game, so there’s no broadcast window to worry about. It’s also predictable how much a matchup between an undefeated 13-point favorite and the team with the worst record in the league will outdo baseball’s crown jewel in ratings. OK, maybe Major League Baseball should give us the World Series day game we’ve all been pushing for instead. [The Athletic]

This isn't happening. As Wulf said, the NFL doesn't do accommodation. But man, would it have been a great gesture.

A great gesture that did happen though came from the Flyers as they left 30th St. Station for New York on Monday.

The whole roster was decked out in Phillies gear with each player wearing the name and number of a different Phillie as they hopped on the train.

The Eagles, Sixers, Flyers, and Union have all shown support for the Phillies' postseason run in one way or another, be it players or coaches attending games or Nick Sirianni going on about how cool playoff baseball is.

Smash the Bell > Smash the Can https://t.co/hlHwSO1hSH

Always an expert in reading the room.

A brutal change of plans

So this is the brutal part.

Before leaving for the ballpark Monday night, I heard a caller on WIP talk about how excited he was to drive up from North Carolina with his two sons to see a Phillies World Series game in person, but with word of the rain coming in, he was concerned.

His sons are both grown up and have jobs. If the game were to be postponed, they wouldn't be able to stick around the extra day. They would have to return home and go to work.

The worst-case scenario was realized.

It's a similar situation for many others as well, some of which are now trying to work out ticket trades to correspond with the days they actually can go rather than the game number.

Hello! Shot in the dark - I have 4 WS Tickets for Game 4 that has been moved to Wednesday night. They are in section 434.

My brother is flying in from Florida. If anyone has 4 tickets to Game 3 tomorrow and you're interested in a trade (or trade plus cash), please let me know.

Help one another out if you can.

To have a shot to go to a World Series game only to be denied at the doorstep after 13 years for reasons completely out of your control is devastating.