Phillies fall, but Nola has encouraging return to rotation 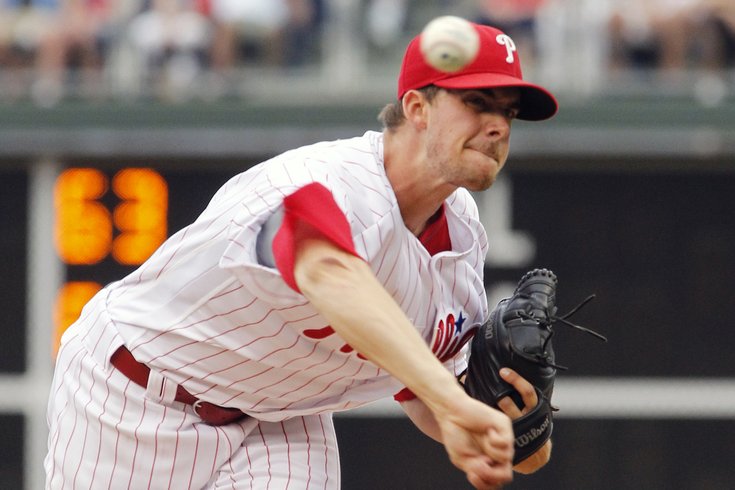 Aaron Nola's return to the Phillies rotation was a successful one. He had 15 days off in between starts following an uneasy final month of the season's first half of the season and the Phillies utilizing the All-Star break to give their second-year right-hander a physical and mental break.

Brett Oberholtzer's third pitch – his third straight 88-MPH fastball to begin the 11th inning – was met by a man wielding a National League-best .400 average against left-handed pitchers this season. After ball met bat, Martin Prado circled the bases with his third home run of the season, finishing off a come-from-behind 3-2 win by the Miami Marlins that began with them one out away from being shut out two innings earlier.

The Phillies (43-51) have lost three of four since returning from the All-Star break and continued to struggle to score in their hitter-friendly home ballpark. The Phils have scored a total of seven runs in 37 innings at Citizens Bank Park in the last four games.

That and an uninspiring effort from closer Jeanmar Gomez added up to defeat on Monday night, the Phillies first loss in six extra-inning games this season and just their 10th in 30 games decided by one run.

But the game's much bigger story took place over the first six innings, when their former first-round pick emerged from a monthlong funk.

"He was outstanding, painting on both sides of the plate, keeping the ball down, at and below the knees," manager Pete Mackanin said of Aaron Nola, fresh off a two-week hiatus. "It was very encouraging, I was happy to see it."

The only thing that stood in the way between Nola and a sparkling return to the rotation after a 15-day layoff was the ball he wasn’t able to get out of the way of in the sixth inning of Monday night’s game.

After retiring 15 of the first 16 hitters he faced in his first start since July 2, and a dozen in a row after Don Kelly grounded out to second to begin the sixth, Nola painted a 90-MPH fastball on the outside corner to begin an at-bat with Adeiny Hechavarria.

The Miami shortstop laced a line drive, with a recorded exit velocity of 85 MPH, right back at Nola. Watching it live, you winced, thinking it struck the 23-year-old pitcher in the head.

Thankfully, it hit Nola on the upper right arm, which is arguably the second worst place for a pitcher to get hit. Nola crouched just in front of the mound and was soon greeted by a trainer, his manager, his pitching coach, and every infielder, too.

The right shoulder injury wouldn’t keep Nola down, however. After a few warm-up pitches, Nola finished the inning.

It would be his last.

Although the frightening comebacker would halt Nola’s start at six innings and 68 pitches, it didn’t ruin a successful return to the mound. Nola allowed just two hits (a 114-MPH single back through the box to Stanton and the ball that hit his shoulder) and one walk (which came after the comebacker) in six shutout innings of an eventual one-run loss.

"That was the longest stretch during a season that I've had off so I was definitely ready to get back out," said Nola, who threw a few side sessions to keep his arm in motion since his last game two weeks and one night earlier. "Throwing some side sessions and live (batting practice), it's just not the same as a game. I was ttching to get back on the mound again. It felt good."

Although he showed promising signs in the final of those five starts, finishing it with three perfect, scoreless innings, Nola was skipped in his final turn in the rotation before the All-Star break.

The 15-day break was created to give Nola, in his first full big league season, a physical and mental breather. It appeared to work.

Nola sent the Marlins down in order in the first inning, collecting two of his five strikeouts of the night. He continued mowing down the Miami order for the next five innings, keeping his fastball on the lower half of the strike zone and bending knees with his signature curveball.

"My plan of attack was just to go after hitters and try to fill up the zone as much as possible," he said.

Nola may have gone another inning if he wasn’t hit in the right shoulder.

Nola probably wouldn’t have had the chance to complete a shutout even if he hadn't been hit since the Phils were cognizant of his pitch count following the lengthy break. But another inning may have helped the Phillies get the game over a little sooner.

Edubray Ramos and Hector Neris were perfect in the seventh and eighth innings, taking a 2-0 game into the ninth. But Gomez was charged with what was just his third blown save of the season when Christian Yelich and Marcell Ozuna each collected a pair of two-out hits, ruining Nola's chance at collecting his first win in more than six weeks.

For the first two-thirds of Monday's game, Odubel Herrera almost single-handedly accounted for the lone run of the pitchers' duel in South Philly. Herrera led off the bottom of the first with a double down the third base line (with two strikes), advanced aggressively to third on a dropped third strike, and scored on a groundout by Maikel Franco.

"That was nice heads-up base running," Mackanin said.

The offense wasn't plentiful, which you had to expect when the opposition was led by Jose Fernandez. But until the bottom of the ninth, it was enough for Nola, who was close to brilliant.

Dating back to his last start before the All-Star break, Nola has thrown nine straight scoreless innings. And even with one off-kilter month, Nola has hardly been bad this season: his 2.95 xFIP (expected fielding independent pitching) ranks fourth among all big league starters, behind Clayton Kershaw (2.15), Fernandez (2.21), and Noah Syndergaard (2.42).

• Jose Fernandez is the third fastest pitcher since 1900 to reach 500 career strikeouts, according to the Elias Sports Bureau. When Fernandez spotted a 97-MPH fastball on the outside corner for strike three against Cody Asche to record the second out of the fourth inning, it was his 10th strikeout of the night (out of the first 15 batters he faced) and the 500th of his career.

And there's also this:

Fernandez’s 14 strikeouts on the night tied a career high. On the flip side, the 18 strikeouts by Phillies hitters on Monday set a season-high.

"He’s tough, he can be tough," Mackanin said of Fernandez. "But it’s too many, I don’t care who’s pitching. We just had too many strikeouts. (And) what did we have, four hits?"

• Tommy Joseph capitalized on one of the few mistakes Fernandez made on Monday night. Fernandez’s first pitch of his seventh and final inning (and his 94th pitch of the game) was a breaking ball that hung over the plate a little longer than the Marlins ace would have liked. Joseph ripped it into the seats above the left field fence to double the Phillies lead.