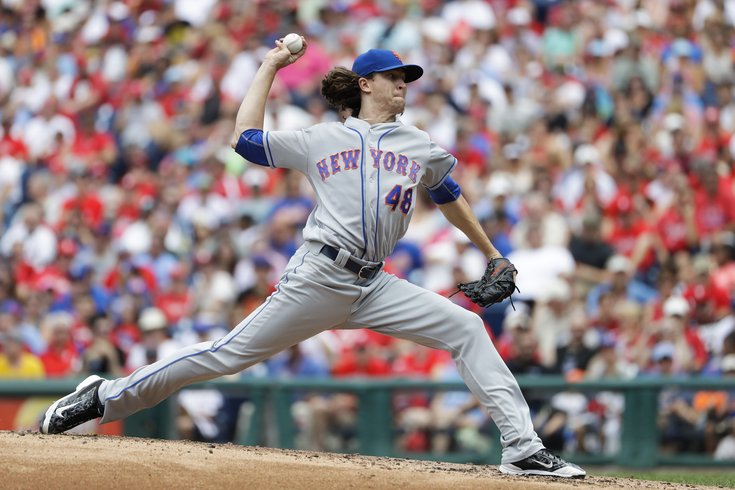 A good percentage of the fans at Citizens Bank Park on Sunday had plenty to cheer about. Unfortunately for the home team, it was the fans donning blue and orange, not red and white, who left South Philly on a hot afternoon with a smile on their collective faces.

Facing Jacob deGrom in their series finale against the New York Mets, the Philadelphia Phillies put up their worst offensive performance of the year, mustering just one hit in a 5-0 loss to their National League East rivals.

That lone hit came from, of all places, starting pitcher Zach Eflin, who fell to 2-3 on the season following the loss. He was also one of just two baserunners all day for the Phillies – the other being Ryan Howard via an eighth-inning walk. For Howard, it was his second start in as many days.

But give credit where it's due: deGrom pitched a gem. In the end, it was a complete game, one-hit shutout that included seven strikeouts and only required 105 pitches.

It was the 28-year-old's first career shutout (and complete game). With the win, deGrom improved to 6-4 on the season and 4-0 in his seven career starts against the Phillies. He also picked up his first career win at CBP.

The few hard-hit balls that the Phillies (43-50) did manage – yes, there were a couple of them – seemed to either be directly at Mets fielders or negated by a strong defensive play. Even deGrom got in on the action, making a barehanded play to his right to throw out Odubel Herrera at first base in the third inning.

"It was his day," Phillies catcher Cameron Rupp said of deGrom. "He made pitches when he needed to. We hit some balls hard that were right at guys. That happens. But it was just his day."

But the real story of the day was deGrom's pitching. And, in turn, the Phillies' (lack of) hitting.

Three times this season, Pete Mackanin's club has been held to three hits. Once, back on May 21, it was held to just two hits in a 2-0 loss to the Braves. Sunday, however, was the first time all season the Phillies had been held to just one hit. The last time that happened was on Sept. 15 of last season (a 4-0 loss to Nationals).

It's also the first time, as far as we can tell, that a Phillies position player has failed to get a hit in a game since the Phillies were no-hit by Josh Beckett and the Dodgers over two years ago (May 25, 2014).

"It didn't look like we took a lot of bad swings," Rupp added. "[deGrom] just made pitches. He was down in the zone. His ball had a little bit of movement on it, just running off the barrel. And then when guys hit it, they hit balls right at them. It just makes for a tough day."

But it wasn't all bad for the Phillies.

Eflin pitched well again on Sunday, allowing three runs on five hits in six innings of work. He also struck out two and walked two in his 101-pitch outing.

After a rough start to his Phillies career in which the 22-year-old righty allowed nine runs (eight earned) in 2 2/3 innings, Eflin has looked like he belongs in the big leagues. He's now gone at least 5 2/3 innings in each of his last six starts and has a 2.56 ERA over that span.

"I thought I did a good job at limiting the damage when I needed to," Eflin said after the loss. "But obviously I left some balls up that shouldn't have been up. I didn't have my best stuff today but I was able to battle and limit the damage.

"Obviously, the ultimate goal is to put up zeros every inning, but you can't have it like that every time out. But I was happy I was able to limit the damage and I just have to work on my stuff and keeping it down.

On a day in which the opposing pitcher was as dominant as deGrom was, it can be easy to lose sight of the fact that Eflin provided another quality start. But not for his manager.

"He's 22 years old and in his first go-round at the big league level. And I really like him," Mackanin said. "He's got a great future ahead of him. The nice thing about it is, as I said yesterday, I wasn't crazy about [Jerad] Eickhoff because I've seen him so much better. And he pitched a hell of a game. Today, same thing with Eflin. He made a few more mistakes than he should have, but he pitched a quality start.

"And these guys are young. It bodes well for the future for us."

The first run Eflin surrendered on Sunday came on a Juan Lagares triple in the second inning, that scored first baseman James Loney. With two outs and two strikes on the Mets centerfielder, Eflin thought he got Lagares looking at strike three. Home plate umpire Pat Hoberg, who had been somewhat liberal with the strike zone to that point, disagreed.

The next pitch was ripped down the right field line and provided all the offense the Mets would need.

"I thought it was a good pitch," Eflin said. "It was a pitcher's pitch. But you can't really assume anything. Obviously every umpire is different but, you know, he could have made the right call."

Part of the issue here is something that's been plaguing other Phillies pitchers recently as well – the inability to put batters away when they have two strikes on them. It's something Mackanin has been hoping to see more of from his staff.

"[It's about] executing pitches," Eflin added. "Strikeouts are going to come. I'm a contact guy, so getting weak ground balls. Obviously there were a lot of balls in the air today. I've just got to work on getting my sinker down and finishing guys."

The Mets' second run came on a long home run by Curtis Granderson in the third inning. The third and final run Eflin allowed came after deGrom singled with two outs in the top of the fifth and Mets leadoff hitter Jose Reyes drove him in with a double to the wall in left center.

Phillies starter Aaron Nola, who was held out of his final start before the All-Star break after struggling recently, is set to return on Monday night when the Phillies welcome Jose Fernandez and the Miami Marlins to town for a four-game series.

After posting a 2.65 ERA through his first 12 starts this year, Nola allowed 27 earned runs in just 18 innings (13.50 ERA) over his final five before missing his last scheduled outing of the first half.

"He's ready to go," Mackanin said. "He's had a good side [session] and he's anxious to get back out there. He's that kind of guy. He's a competitor and he doesn't want to sit. I'm anxious to see him – another young guy."

In addition to seeing how the young righty bounces back after an extended break, there could also be some history made in South Philly this week.

Ichiro's quest for his 3,000th career hit could come to an end against the Phillies – assuming the Marlins don't try to make it so that he reaches that milestone when the team returns home next weekend to host the Mets.

He entered Sunday nine hits shy of joining the 3,000-hit club, but after a three-hit day, the Marlins outfielder will head to Philadelphia needing just six hits in the four games.

*The game was still in the eighth inning when I wrote this, so there's a chance he's already inched closer to No. 3,000.