Phillies injury updates: With outfield and bullpen decimated, when could help arrive? 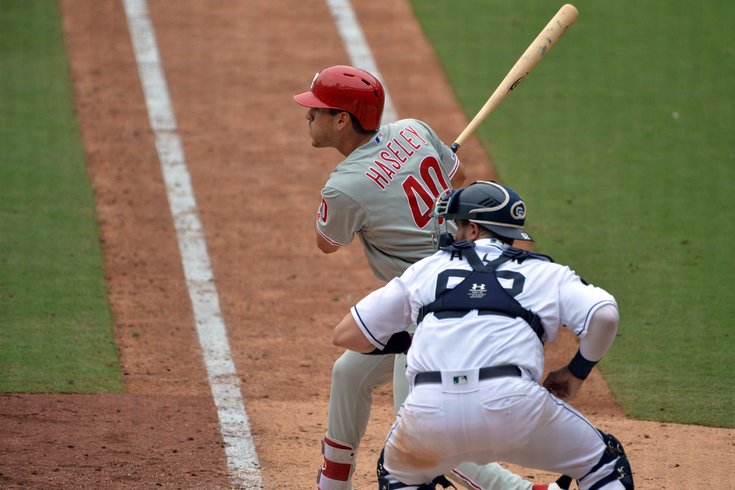 The Phillies, looking for their fifth straight win overall, will go for a series sweep of the Reds at Citizens Bank Park. Heading into play on Sunday, they're 10 games over .500 (37-27) and are two games ahead of the Braves for the National League East lead.

The bad news, as you likely already know, is that the team has been decimated by injuries in recent weeks and are running out of options to replace all those injured players. And, making matters worse, is that all these injuries seem to be focused on two main areas of the roster: the bullpen and the outfield.

Every day, it seems as though there's a new name to add to the injured list — with the latest being outfielder Adam Haseley and reliever Seranthony Dominguez — and it's getting difficult to keep track of all the different ailments, let alone trying to remember when various players could return to Gabe Kapler's lineup.

But fear not, we'll run down all the injuries now and give you a quick refresher, with the hope being that another Phillies player doesn't land on the injured list by the time this is published. So let's get right into it...

What the hell is going on with the Phillies outfield? Roman Quinn has been on and off the injury list for much of the season, so there's no surprise there. But that's about the only thing that makes sense in the outfield. After the Phillies lost Andrew McCutchen to an ACL tear on Monday and Odubel Herrera to administrative leave following a domestic violence arrest in Atlantic City a few weeks prior, the team decided to call up former first-round pick Adam Haseley, who opened the season at Double-A Reading before a brief stint at Triple-A Lehigh Valley.

That experiment lasted all of two games before Haseley landed on the injured list.

Haseley reportedly injured his groin running to first in Tuesday night's win over the Padres, which was also his MLB debut. Interestingly enough, he played on Wednesday night (and drove in the game-winning RBI) before being held out on Friday and ultimately being sent to the 10-day injured list on Saturday. Currently, there's no timetable for a return, but since he hasn't played since Wednesday, he'd technically be able to return to the Phillies sometime next weekend if he's healthy enough.

In the meantime, the Phillies recalled Nick Williams to fill Haseley's roster spot, but the injury leaves Scott Kingery as the only real centerfielder on the entire roster. Dylan Cozens, who is on the team's 40-man roster, isn't even an option as he is (surprise!) on the IL for Lehigh Valley. And Aaron Altherr, the team's other bench outfielder coming into the season was sent through waivers a while back, before all this injury madness began. They'd probably like to have that one back.

Of course, if Quinn's recovery is any indication of what's in store for Haseley, we might not be seeing him for quite some time. Quinn hasn't played since April 24 as he's been on the injured list recovering from a Grade 2 groin strain. On the bright side, Quinn has been playing in some extended spring training games in Florida and could soon be ready to return to the Phillies. Unfortunately, Quinn was hitting just .120 in seven games before the injury.

Unfortunately, this is one guy the Phillies definitely won't be getting back this season.

Herrera isn't injured, but he's out of the lineup all the same. His administrative leave is set to end on June 17, but odds of him coming back to the field for the Phillies are slim to none. The team has already removed all Herrera signage from around the park and traded for Jay Bruce (before McCutchen went down), both signs that they're preparing to move on from the troubled outfielder regardless of how MLB's investigation concludes. It's unfortunately timing, but definitely the right move, especially if he's guilty of what he's been accused.

If you thought the outfield situation was bad, just wait until you see this bullpen, which was a huge problem before all the injuries to Phillies position players — and it hasn't gotten any better in the interim. As of right now, there are seven Phillies relievers on the injured list.

So, what's been the problem? General manager Matt Klentak was asked about that recently, and here's what he had to say (via Jim Salisbury of NBC Sports Philadelphia).

“We're definitely digging into it,” Klentak said. “I wish I had a good answer for you or a direct answer.

“A couple of weeks ago when we were in Chicago, our manager was criticized for being too conservative with the bullpen. I do think, in large part, Kap often operates to try to protect the guys and not to overuse them and overwork them to the point of, in the Chicago series, it became a big topic of conversation.

"As I look back at the last year and a half of our season and looking at the bullpen, it's hard to say that we've overworked anybody or abused anybody. Kap's been really careful about back-to-backs and not dry-humping guys in the bullpen. Their innings totals and their appearance totals are not that crazy at all, especially relative to the rest of the league. That's the first place you look just to see, is there something we could do differently? We don't see it there.

“The next place you look is in the training room and these work habits and offseason programs and things like that. We've not been able to identify anything that is markedly different or worse than what we've done in prior years.”  [nbcsports.com]

Of course, it could just be bad luck. But I don't know anyone who's this unlucky.

That being said, some of the Phillies' injured relievers could be back in the bullpen within the next week or two. Let's take a look at where they stand...

On Friday, Dominguez was placed on the 10-day injured list with ulnar collateral ligament (UCL) damage in his right elbow. And that's one of the worst things you can hear about a pitcher, because it usually leads to season-ending Tommy John surgery, which will likely cause him to miss part of next season as well. Dominguez will go for a second opinion, but it's not looking like the Phillies set-up man will be back any time soon. There is currently no timetable for his return.

Arano has pitched in just three games this season, and was recently transferred to the 60-day injured list following  arthroscopic surgery on his right elbow. His possible return date is still unknown.

Ramos, who hasn't pitched since May 10, is on the 10-day injured list with right biceps tendinitis but could return this week. While Ramos' 4.66 ERA isn't all that impressive, if you take out one bad appearance back in early April in which he surrendered three earned runs in just 2/3 of an inning, his ERA drops to 2.00. And over his last eight appearances, that number drops even further to 1.59.

Morgan, who is important to the bullpen because he's one of the team's only left relievers, has been great out of the bullpen this season, holding opponents scoreless in 22 of his 24 appearances. He allowed two runs in each of those two outlier appearances, which caused his ERA to balloon slightly — it's currently at 1.96 — but there's no question that the Phillies need him back sooner rather than later. Morgan is currently on the 10-day injured list but there's some good news. He's reportedly expected to return at some point during the Phillies upcoming road trip next week.

Hunter (60-day DL) has been sidelined with a Grade 1 flexor strain in his right forearm since February but could join the Phillies before too long. He's already thrown bullpen sessions and will reportedly begin a rehab assignment in the minors within the week. When he's ready to pitch for the big club, however, will likely depend on how those rehab appearances go.

Neshek landed on the 10-day injured list with right rotator cuff inflammation, but, like Morgan, he could return to the Phillies on their upcoming road trip, which begins on June 14 in Atlanta.

Last month, Robertson, who was the Phillies' big offseason acquisition in the bullpen but hasn't pitched since mid-April, was told by Dr. James Andrews not to throw for three weeks due to a Grade 1 flexor strain in his right elbow. There's currently no specific timetable for when he could return, but he's expected to be out until around the All-Star break or possibly after.